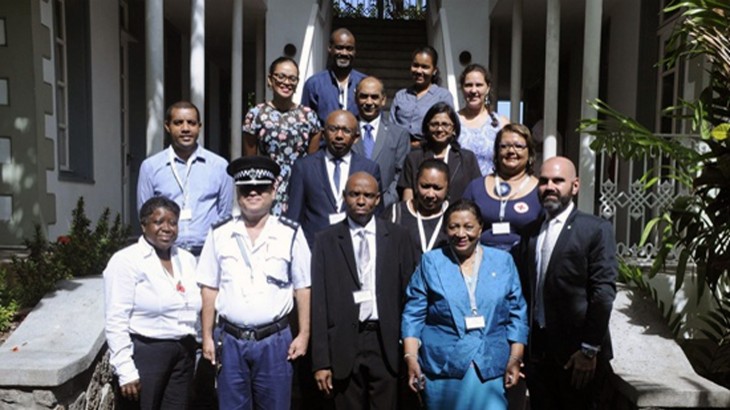 The representatives of the IHL National Committes from the 4 countries. CC BY-NC-ND/ICRC

The National IHL Committees of Comoros, Madagascar, Mauritius and Seychelles have agreed to create a sub-regional IHL platform to engage in dialogue and exchange ideas on generating greater respect for IHL in accordance with obligations under the 1949 Geneva Conventions. This was one of the outcomes of the peer to peer meeting of Indian Ocean Island National IHL Committees, which took place in Seychelles from 2 to 3 November 2016.

The aim of the meeting was to create a platform for discussion on substantial issues of mutual interest, including the 2013 Arms Trade Treaty and follow up from the 32nd International Red Cross Red Crescent Conference. Another important issue discussed was that of IHL and maritime security. The meeting also served as a general platform for government representatives to share challenges and best practices in promoting IHL at the national level. The platform will meet annually to discuss issues of mutual concern and interest, and will be supported by the ICRC. It will in particular provide an opportunity to the National IHL Committees represented on the platform to share their experiences on the measures taken at the national level to ensure implementation and compliance with IHL obligations, as well as to compile their best practices, which may be shared with the larger region.

The ICRC also took the opportunity of the visit to the Indian Ocean region to conduct a number of IHL activities in Mauritius, aimed at enhancing the prominence and the understanding of this body of law on the island. ICRC delegates had the opportunity to meet with the Honourable Prime Minister of Mauritius, Sir Anerood Jugnauth, who expressed his country's continued support to the ICRC and to the implementation of IHL. In addition, a number of stakeholders, including government education focal points, barristers, Magistrates and government officials were exposed to the fundamental principles of IHL as well as to IHL updates relevant to the region. For the first time the ICRC partnered with the Institute for Judicial and Legal Training in Port Louis to provide a 2-hour dissemination session to Judges of the High Court of Mauritius. The training focused on the relevance of IHL to peaceful island States and the role that Judges can play in its promotion and implementation. The ICRC also participated in an IHL workshop for over 600 new recruits from the police, prisons service, coast guard, riot control and paramilitary units of the police.

Newsletter of the regional delegation which covers Madagascar, Mauritius, Seychelles and Comoros