Croatia: Continuation of long-standing cooperation with the ICRC 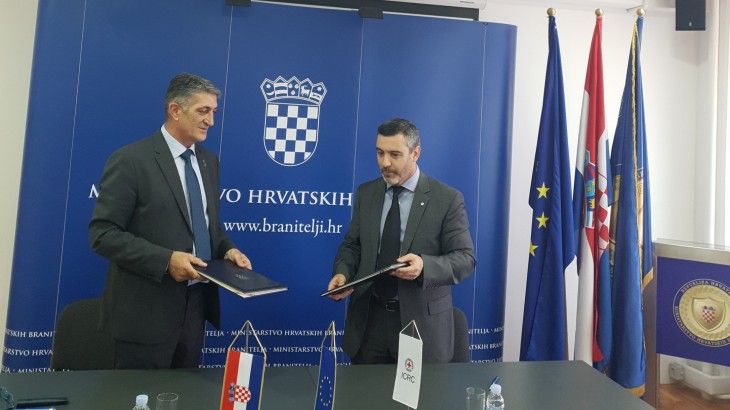 The ICRC and the Ministry of Croatian veterans signed a Memorandum of Understanding on transfer of information on missing persons.

On 17 July 2019, a Memorandum of Understanding (MoU) was signed between the Ministry of Croatian veterans and the International Committee of the Red Cross (ICRC).

The MoU, between the Ministry of Croatian veterans and the ICRC, was on the transmission and use of information and documents on missing persons in the homeland war in the Republic of Croatia (1991-1995). Obtained from international archives, the MoU was signed by Fabien Bourdier, the coordinator for the missing persons for the Western Balkans of the ICRC, and the chair of the Croatian government's commission for detained and missing persons, assistant veterans minister Stjepan Sučić.

The signing of the MoU is a confirmation of the continuation of the long-lasting cooperation between the Ministry of Croatian Veterans and the ICRC aimed at shedding light upon the destiny of people reported missing during the Homeland War. The common goal is to provide truth to family members of the missing people who live in the uncertainty of not knowing the fate of their loved ones.

The purpose of this project is to explore the documentation from the archives of various international bodies and organizations that have been active in south-east Europe during the 1990s.

The Ministry of Croatian Veterans supported the five-year strategy of the ICRC, considering the fact that the lack of credible information represents a key obstacle in solving the remaining number of cases of missing people during the Homeland War.

It is for this reason that, at the meeting held on 31 October 2018, in the Ministry of Croatian Veterans, it was agreed to define the rules by means of a MoU which will determine the rights and obligations of all the parties involved in the process, with the sole aim of acting in line with the priority of humanitarian dimension of the issue of missing persons.

Following the signing of the MoU, a working meeting was held with the representatives of the Directorate for Detained and Missing Persons of the Republic of Croatia and the ICRC. Priority was given to the implementation of the provisions of the MoU and the implementation of the activities of other projects carried out in cooperation with the ICRC, including the publication of the fifth edition of the Book of Persons Missing on the Territory of the Republic of Croatia, which is expected to be released in the coming months.