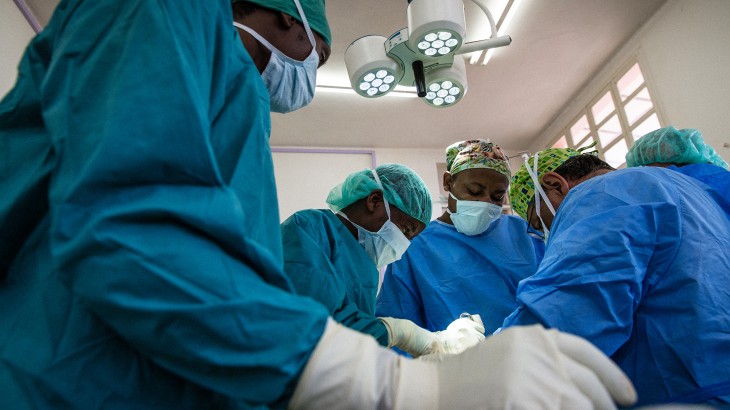 A wounded soldier being operated on by the surgical team from the ICRC and the main referral hospital in Bukavu. CC BY-NC-ND/ICRC/Alyona Synenko

The ICRC is sharing its experience and expertise in treating the war-wounded with a number of medical facilities in the eastern part of the Democratic Republic of the Congo, a region devastated by decades of armed conflict. The organization has sent two surgical teams into both North and South Kivu to instruct medical professionals on specific war-surgery techniques.

The ICRC's efforts are focussed on the main referral hospital in Bukavu and the Bethesda/Ndosho hospital in Goma. These two facilities regularly treat large numbers of people wounded in the fighting, working under extremely trying conditions and with very limited resources. The ICRC provides them with support, mainly by training the local medical staff and helping with operations. The organization also defrays the costs of such care.

"Teaming up with the ICRC has improved how we work," said Dr Georges Kuyigwa, head of surgery at the Bukavu hospital. "We now use simple yet effective techniques that improve our patients' chances of surviving and getting better. Despite my university training and 30 years of surgical experience, I never imagined, for example, that we could treat war wounds with sugar and vinegar, and that the results would be so impressive."

In the context of war surgery, sugar is used for dressing very deep wounds. It sterilizes them and reduces the risk of contamination. Vinegar is used to neutralize pseudomonas, a bacterium that infects wounds and gives them a greenish tint and an acrid smell.

Several practices in the area of anaesthesia have also changed at the hospital. Dr Pierre Kabuya, an anaesthetist, says he was favourably surprised by the new methods: "I had never administered general anaesthesia without some sort of support like a ventilator." Some simple techniques developed by the ICRC allow a patient under anaesthesia to breathe safely without an additional source of oxygen through the use of a mouthpiece. 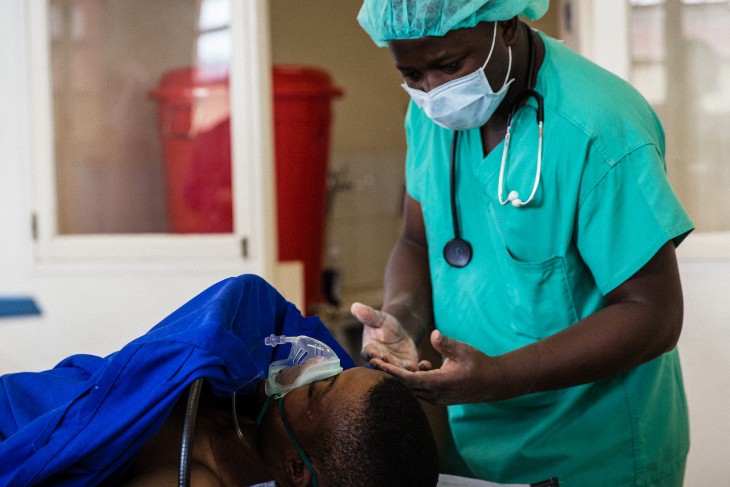 A wounded soldier being operated on by the surgical team from the ICRC and the main referral hospital in Bukavu. CC BY-NC-ND/ICRC/Alyona Synenko

Nursing care was also reorganized. "Thanks to the ICRC project, each patient now has a card containing the information needed for proper follow-up care," said Espérance Mwamini Birindwa, the head nurse in the ward. "Each patient also has a dedicated set of bandages to prevent the spread of germs. In addition, Dakin's solution, a highly irritating chlorine-based disinfectant used when bandaging wounds, was replaced by saline."

The training and management of medical staff in Bukavu hospital have improved since the ICRC first got involved in February 2013, meaning that the organization can now begin handing war-surgery responsibilities back to the hospital. At the end of June, a local team will take over. The ICRC will still provide technical oversight, ensuring that war-surgery protocols and best practices are respected. It will also continue to provide material and financial support, which means that the war-wounded will not have to pay for care.

"As part of this project, the hospital staff are meant to acquire certain skills in accordance with a timetable," said Dr Amadou Fadiga, the head of the ICRC's surgery project in Bukavu. "I think the local staff have now learned the ICRC's procedures. We will stay through June just to be sure that certain habits are firmly ingrained before our surgical team finally passes the baton." This transfer of responsibilities does not signal an end to the ICRC's involvement, however, as the organization will continue to support the hospital's work in treating war casualties.

The ICRC has also carried out efforts to stabilize the power supply to the operating room, the lab and the blood bank. And it has donated a generator, to ensure an interrupted flow of electricity in the operating room.

The ICRC has been working with Bethesda/Ndosho hospital in Goma since November 2012. It still has a full surgical team in place, made up of a head of project, a surgeon, an anaesthetist, a head nurse, an operating-room nurse, a post-operative nurse and a physiotherapist. The hospital has a capacity of 169 beds, 69 of which are reserved for wounded people treated free of charge by the ICRC.

In addition to the instruction and assistance it provides in Ndosho, the ICRC also trains staff in nearby health-care centres in the skills needed to stabilize the war-wounded before sending them on to the hospital.

"We teach specific techniques of war surgery," said Dr Ali Touati, an ICRC surgeon. "Today, the local medical staff learned, for example, that a war wound should not be sutured immediately after debridement" – a process that consists of removing all dead tissue from a wound to allow the cells to regenerate in order to promote healing. "We're staying to make sure these newly learned techniques become second nature. We are not here to do the work of the local staff, however, particularly when they have the necessary skills. Our goal is to withdraw as soon as possible." Dr Touati also notes that the ICRC's efforts in the past few years have helped considerably reduce the mortality rate in the region.

One of the major technical innovations brought to Goma was the introduction of a new-generation splint by Dr Hassan Nasreddine, a consulting surgeon with the ICRC. This metallic device is used to treat fractures of the femur by immobilizing the patient and reducing the fracture. This splint, made in Switzerland, is very different from its predecessors: it costs less, it can be set up in only 3 to 5 minutes, it is made from galvanized steel so it does not rust, and at 10 kg it weighs enough to sufficiently stabilize patients in their bed.

At Bethesda/Ndosho hospital, in an effort to improve patient care, the ICRC also worked on repairing the infrastructure and upgrading existing equipment. Working conditions in the operating room have improved, and the hospital is now on the power grid and connected to the drinking-water supply. The ICRC has also created a waste management zone for both hospital and food waste and set up a kitchen and laundry room dedicated to the war-wounded. "Ours is now the cleanest hospital in Goma," said Dr Bose Semanengu, head physician at Bethesda/Ndosho hospital. 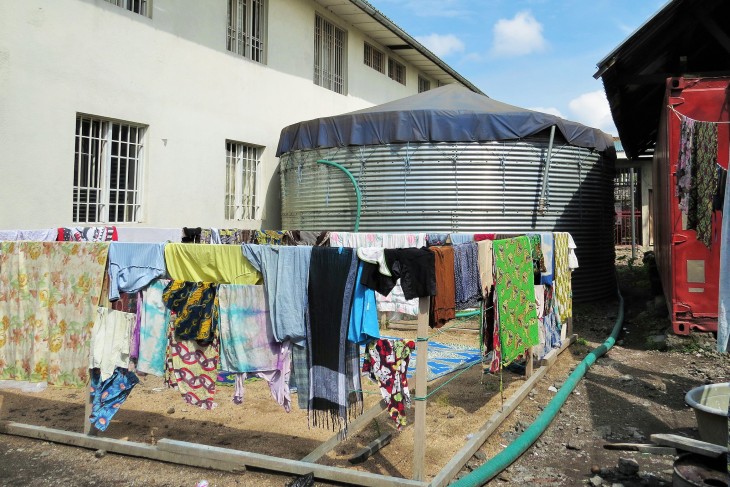 From January to March 2015, these two hospitals treated 159 people wounded in the fighting – 66 in Bukavu and 93 in Goma. 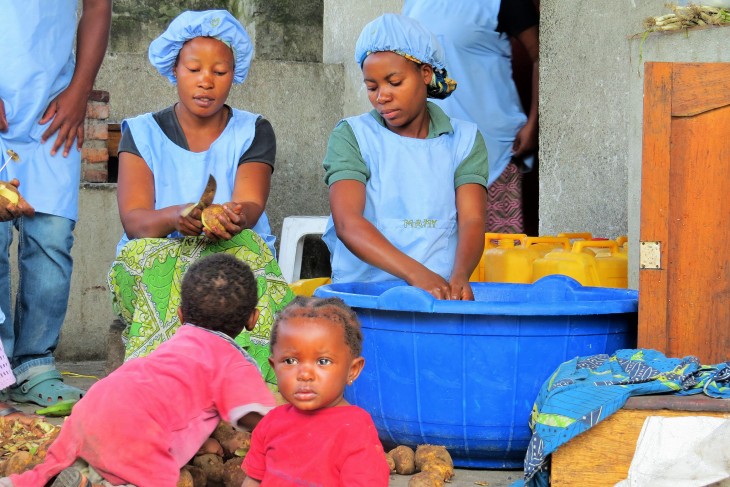 Ndosho CBCA Hospital, Goma, North Kivu. The hospital's cooks, in the kitchen renovated by the ICRC in 2014. CC BY-NC-ND/ICRC/Elodie Schindler