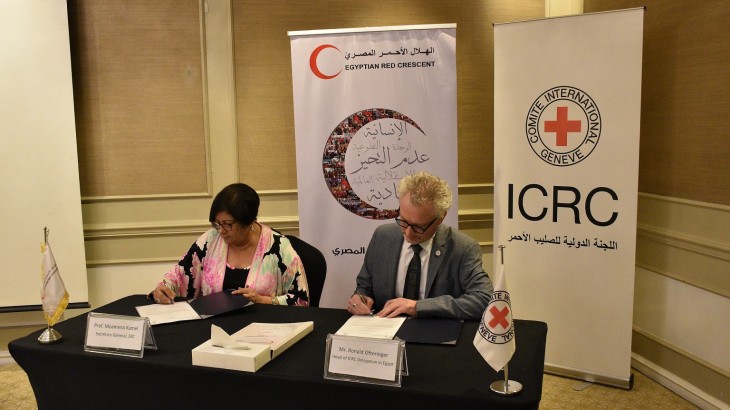 Prof. Moamena Kamel, secretary-general of the ERC, and Ronald Ofteringer, head of the ICRC’s delegation in Egypt signing the new agreement

Cairo (ERC, ICRC) – In order to continue the joint humanitarian response and to mark the cooperation between the two institutions, the Egyptian Red Crescent Society (ERC) and the International Committee of the Red Cross (ICRC) signed a four-year partnership framework agreement on Friday.

Following the signing ceremony that was attended by representatives of the government of Egypt, diplomatic missions and other national and international organizations, Prof. Moamena Kamel, secretary-general of the ERC, and Ronald Ofteringer, head of the ICRC’s delegation in Egypt, spoke about the importance of the new agreement.

“We work together as institutions to provide relief and assistance to those affected by war and other situations of violence. Our work together is a model of ongoing action to build capacity, rehabilitate and integrate the violence-affected people into the community,” said the ERC secretary-general.

Through the agreement, the ERC and the ICRC would strengthen their longstanding partnership in joint humanitarian operations and capacity-building programs to respond to the needs of people affected by situations of violence in Egypt, and by conflicts in the region.

The event also saw the commemoration of the 70th anniversary of the Geneva Conventions of 1949, the core of international humanitarian law that seeks to limit the devastating effects of war on civilians. “The Geneva Conventions are a vital global pledge born out of the kind of suffering we see today in Syria, Yemen, and South Sudan, among other conflicts around the world. They have indeed saved countless lives and reduced suffering across hundreds of armed conflicts in the last 70 years,” said the ICRC’s head of delegation.

Both organizations have been working together in Egypt to promote the basic rules of IHL and the role and activities of the International Red Cross and Red Crescent Movement. The ICRC has been supporting the National Society to develop its services and capabilities, such as the establishment of rapid response teams. The ERC, in cooperation with the ICRC, has distributed aid material among thousands of households in North Sinai.

The ICRC is present in more than 90 countries around the world, including Egypt where it has been working for over 100 years. It is an impartial, neutral and independent organization whose mission is to protect the lives and dignity of victims of armed conflict and other situations of violence and to provide them with assistance.