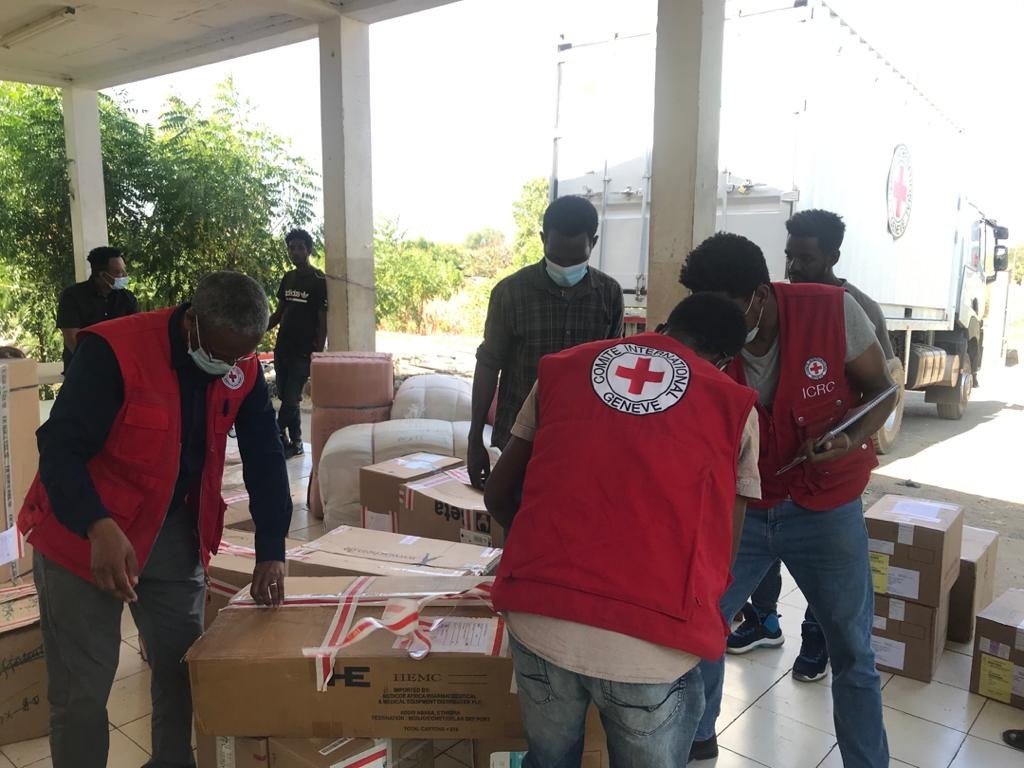 In mid-November, after the first week of clashes in northern Ethiopia, an ICRC team traveled to North Amhara and West Tigray. In this account, Wilson Mondal, field team leader, describes what they saw.
Article 27 November 2020 Ethiopia

We traveled as a team of six people to North of Amhara and West Tigray by car, a journey that takes about three days to make. The purpose of our mission was three-fold: better understand the humanitarian needs, meet with authorities, and deliver medicines and supplies to health care facilities and ambulances, which we had heard were dealing with a high number of casualties from the clashes. The team also visited some people detained in relation to the fighting and provided them with hygiene items.

Displaced people fear for their lives

On the way from North Amhara to West Tigray, we came across a destroyed village. A house was burning. The area was completely deserted.

In Dansha in West Tigray we met with people who were displaced from their homes and were living in a makeshift camp without food, water, or medical care. They told us they feared for their lives, and that they wanted safe passage out of the area.

On the North Amhara side of the border in Abderafi, the needs were similar among the displaced. The people we met had fled their farms in the surrounding area, leaving their crops and homes behind. Today they lack the basics—food, water, medical care and shelter.

We do not have an accurate picture of the total number of people displaced from their homes by the fighting in northeast Ethiopia. There are about 2,000 people living in three camps in the areas we visited, but we believe there are many more in areas we are yet to reach.

Three Ethiopia Red Cross ambulances have been attacked since the fighting started. This is a deeply troubling signal that first responders—and the people relying on them for care—are not being respected or protected, which can have dire consequences. These ambulances have carried hundreds of injured people in recent weeks to health care facilities. We provided some first aid kits to the Ethiopian Red Cross Society (ERCS) branch in the area.

We found health care facilities in North Amhara to be still treating casualties, but at a slower rate than they had in the first week of clashes during which they were receiving 50 to 60 wounded each day. While the number of patients needing emergency care had slowed, most of the facilities had run out of essential medicines and medical supplies. We gave a few critical facilities emergency medical supplies to help them restock and be able to continue to care for the wounded.

Among them was Gonder Teaching Hospital, the main referral facility in the area, which was also treating a handful of COVID-19 patients—a reminder that the pandemic is still with us, despite the fighting and a new humanitarian crisis unfolding in its wake.

Separated from their loved ones

In just three weeks, many people have been separated from their families and will need support in their efforts to find them. This is made even more complicated by the fact that phone and internet networks remain down in Tigray Region, cutting people off from the outside world.

We already have more than 1,300 requests from people in Ethiopia and abroad frantically looking to contact their relatives. We know this is just the tip of the iceberg.

Some, tragically, are already dead. Recovering bodies will be a huge challenge, which can leave families without closure on the fate of their loved ones.

This is what we are doing to help pic.twitter.com/QaME88qs50

We delivered medical supplies to health care facilities in North Amhara and first aid supplies to the ERCS, but many urgent needs remain.

As clashes move to the east, health care facilities in Tigray Region need support to care for the wounded, and other hospitals are running out of drugs and supplies for routine medical issues. Ambulances must continue to do their work to transport the injured from the frontlines and have the first aid supplies to do so.

People need help to restore contact with their loved ones in Tigray Region, elsewhere in Ethiopia and abroad. The needs of those detained in relation to the fighting in Tigray Region must not be forgotten, including their right to contact and receive news from their families.

However, so much is still unknown on the level of violence and subsequent suffering that people in the Tigray region have endured in just three weeks. Phone and internet remains down, which hinders our ability to independently verify reports.

Now all eyes are on Mekelle, Tigray's capital. The city is home to more than 500,000 people, and we know some hospitals there are already running dangerously low on supplies.