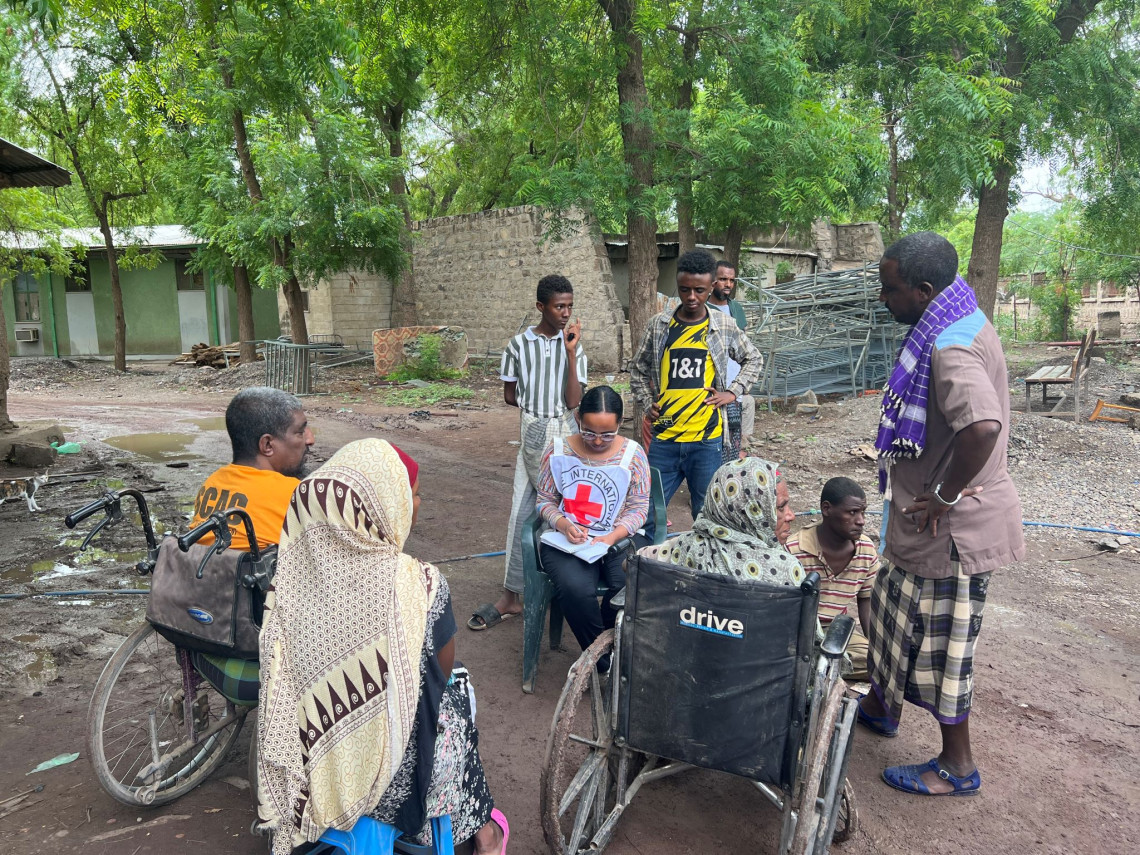 The humanitarian needs in Afar are huge. Many people living with disabilities do not have access to medical services.
Article 19 September 2022 Ethiopia

Getachew Gesese sits on a cemented edge of a flower bed, under a flagpole in front of a hotel in Semera, the capital of Afar region in Ethiopia. Next to him is his friend, Shegaw Ababu. A friend with whom he shares a similar disability and challenges. They have both lost their ability to walk. A dog with its ribs running against its belly like a bell stares at them with its tongue out of its mouth, as they beg for money from passersby.

Getachew is a 20-year-old man who lives in Logia, a small town 10km outside of Semera. He lost his ability to walk 10 years ago. The condition forced him to abandon school and his dream of becoming an orthodox priest – in a region where over 95% of the population is muslim.

"When it started, I felt severe cramps and difficulty stretching my legs," says Getachew.

Although his mother massaged his legs for months with traditional herbs, Getachew's condition got worse, and he could no longer walk. He did not seek medical diagnosis and treatment because his family could not afford it.

"Everybody also said there is no treatment for it," he adds.

With his physical disability, Getachew says he cannot get a job. He lives in a poor neighbourhood in Logia and depends on donations from people on the streets for survival. In the past, he could make 700 Ethiopian Birr on a good day. But since the war in northern Ethiopia spread to Afar region in 2021, he hardly makes 200 Birr. Some days, there is nothing to eat at home. And on several occasions, his landlord has thrown him out of the one room he rents – for days - and then will feel pity for him and allow him to stay without paying.

"It's tough now, especially for us who cannot walk," says Getachew.

The humanitarian needs in Afar are huge. Many people living with disabilities do not have access to medical services. There is no functional physical rehabilitation center in the region to provide full services to persons with special needs. The conflicts and violence in neighbouring Tigray, Amhara, Somali and Oromia regions have made it even more difficult for patients to access care elsewhere.

At Dubti Referral Hospital – the largest in the region – doctors say the hospital is strained because of the dire humanitarian situation exacerbated by the different armed conflicts in neighbouring regions. Patients are being treated on beds in the hospital's corridors and several others are in queues waiting to be seen by medical staff. Among them are persons with different forms of physical disabilities. Some of them lost their legs and arms in the conflicts.

"Many patients with physical rehabilitation needs come here. Most of them are from very distant and remote areas. We can only provide basic services because we do not have the resources. We need assistance to improve our physiotherapy services," explains Dr. Hussein Aden, Chief Executive Officer of Dubti Referral Hospital. According to him, the hospital lacks equipment and is seriously understaffed. It also lacks critical services like mental health and ophthalmology.

The region also faces a food crisis. There is not enough food for people to eat. The influx of displaced people from nearby regions has added to the number of people who cannot access food. Malnutrition cases are rising. At a makeshift feeding centre in Dubti hospital, dozens of children and adults are getting therapeutic support for malnutrition and its complications. At the Mille Primary Health Center, which is some 60km on the outskirts of Semera, health experts weigh dozens of malnourished children at a nutrition center before providing them with essential therapeutic nutrition. Some of them arrive in desperate conditions.

The food shortage has left some people with no choice but to eat the seeds of certain legumes (genus lathyrus) that have irreversible health consequences – including permanent disability. Like many other people in the region, Getachew suffers from neurolathyrism – a lasting lower limbs paralysis condition caused by eating certain legumes, as diagnosed by physiotherapists from the International Committee of the Red Cross (ICRC), after screening patients in Afar region in August 2022.

"I ate guaya (grass pea). Three days after, I started having cramps, fatigue and difficulty stretching my legs," recalls Getachew.

The ICRC team's outreach activity was the first in the region for persons with disabilities. A total of 104 patients were screened in Logia, Mille, Dubti and Semera. Twelve of the patients were diagnosed with neurolathyrism as the underlying cause of their disability – including Getachew's 29-year-old friend, Shegaw.

Shegaw, 29, lost his ability to walk 10 years ago. Without medical care, he finds it very hard to cope with the disability.

But since meeting our physical rehabilitation team in Logia, he is hopeful his condition will get better. He is among 104 patients screened in #Afar region pic.twitter.com/hlde7f7NtW

"Looking at the number of neurolathyrism cases and the age range of the patients, their condition is likely linked to the food crisis in Ethiopia in the 1980s that forced people to eat certain legumes, knowing the health consequences. The Afar region, where we identified these patients, and the eastern Amhara region were severely affected by this food insecurity," explains Venkatakannan Packirisamy, ICRC's Physical Rehabilitation Project Manager in Ethiopia. "The current food situation needs timely action to prevent many more people from being pushed into this irreversible health condition. Apart from the acute social and health-related consequences, the food insecurity leaves a longer-term legacy in terms of disability and productivity of the affected population."

Like Getachew, most of the people living with disabilities in Afar have never had the chance to consult a medical doctor or physiotherapist.

"This [screening by the ICRC team] is my first time to meet a medical professional," says Shegaw. "If I can be treated, I'll be very happy to walk again."

After the screening, the ICRC team provided immediate support that included crutches to 61 patients on the spot, while 13 others were registered to receive wheelchairs to aid their mobility. Severe cases were referred to the physical rehabilitation center in Dessie, Amhara region, supported by the ICRC and to hospitals in the capital Addis Ababa, where they will receive free treatment.