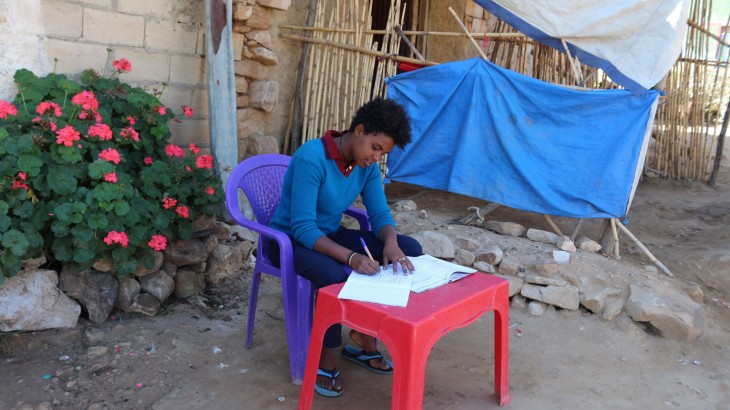 Aster Negasi had a dream of becoming a physician to relieve people of their pain after completing her schooling. But her childhood dream was interrupted at the age of 14 when she joined the Tigray People's Democratic Movement (TPDM), a former Ethiopian armed opposition group operating from Eritrea.

After living in Eritrea for more than two years, she returned to Ethiopia in October 2018 together with an estimated 1,600 ex-combatants, following the August 2018 agreement between the government of Ethiopia and the TPDM, aiming the latter to engage in a peaceful activity.

Aster, who is now 17, went back to school (grade 9) after reuniting with her single mom who lives in Gulomekeda Woreda in East Tigray Zone, near the Ethio-Eritrean border. But she worried that she might drop out of school again, this time for economic reason, as her mom might have failed to cover her school expenses from the income she gets from a small farm. Her worries are over (at least for this academic year), as the ICRC took the initiative to cover school expenses for her and another 39 most vulnerable children of ex-combatants and underage ex-combatants who settled in Mekelle towns and its environs and in East Tigray zone.

The ICRC provided 2,000 Birr to each child through their parents/guardians. The money is being used to cover the costs of school registration, uniforms, footwear, backpacks and stationery.

According to Selam Gebreegziabher, an ICRC staff member in charge of this project, the recipients are either children who were not able to go to school or those who were likely to drop out of school mainly for economic reasons.

"The cash grant not only helps the children to go to school but also enables their parents or guardians to save the money they could have spent on schooling items and use it for other essential needs, like food," she remarked.

Girmay Negasi, another underage ex-combatant, who lives with his parents in a rural area near Zalanbessa town, said: "my parents and I are very happy with the ICRC support".

Asmelash Tesfay, an ex-TPDM combatant, says "most of us are daily labourers or engaged in irregular jobs with meagre income that cannot even feed our families properly, let alone sending our kids to school. Humanitarian organizations need to support us to engage in income-generating activities to help us integrate within society."

This is the first time for the ICRC to make an intervention aimed at facilitating access to education in Ethiopia.