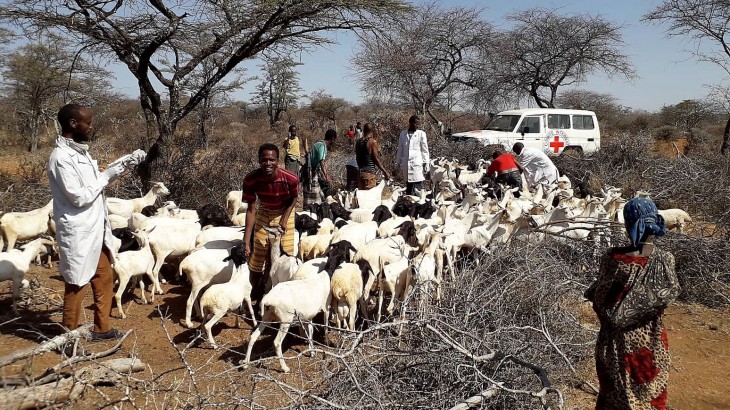 Nearly 500,000 domestic animals belonging to communities affected by ethnic violence in three districts along the Oromia-Somali border (East Ethiopia) were vaccinated against three major diseases through a campaign carried out from February to April 2020 by the ICRC and its partners.

The campaign is part of a livestock support programme jointly run by the ICRC and the Ethiopian Red Cross Society (ERCS), in partnership with the Somali Region Livestock Resource and Pastoral Development Bureau and Oromia Region Pastoral Area Development Commission.

The vaccination program benefited 32,800 pastoralist households with an estimated 196,800 family members living in Meyumuluka and Qubi districts of Erer Zone in Somali Region, and in Meyumuluke district of East Hararghe Zone in Oromia Region, according to Khurshed Musoyatov, ICRC delegate.

A preliminary assessment conducted in collaboration with veterinarians of regional livestock offices had confirmed earlier that the three diseases are very common in the area. Cases of Anthrax were reported at the end of February, so the campaign timely contributed to arrest the outbreak, remarked Abdiselam Mohammed, a veterinarian working for the ICRC.

In addition to livestock vaccination, sick animals in the area can now be treated with quality drugs by certified animal health workers as veterinary pharmacies were stocked with drugs by the ICRC.

"The livestock project with all its activities has achieved a direct positive impact on the health status of the livestock and on the livelihood of pastoral communities," remarked Faysal Ali, head of the pharmacy established recently in Qubi district of Erer Zone,

"We appreciate the presence of ICRC in our zone, where no other humanitarian organization is working," said Hussen Abdi Bile, deputy head of Erer Zone in Somali Region, adding; "We are particularly glad for its (ICRC) support to the communities in the most underserved districts (Meyumuluka & Qubi), that have been heavily affected by the recent conflict along the border between the Somali and Oromia regions."

In Ethiopia, the ICRC works closely with the ERCS, to give economic support to people affected by inter-communal clashes with the aim of providing them with vital means of production to restore their livelihoods.