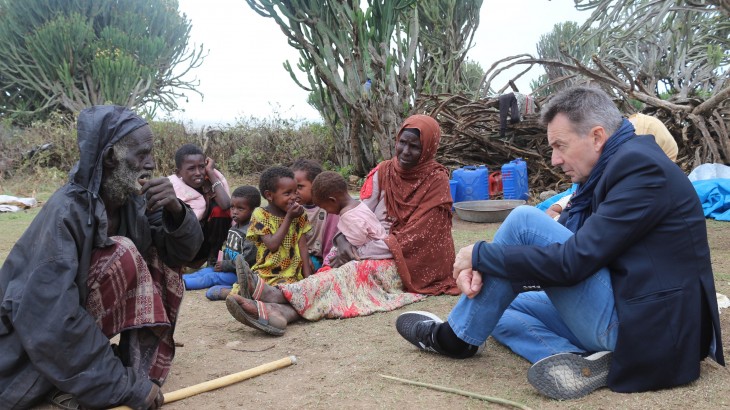 Addis Ababa (ICRC) – Millions of people in the Horn of Africa are trapped in near-constant crisis as the combination of droughts, floods, and violence force people from their homes and erode already-fragile livelihoods, International Committee of the Red Cross President Peter Maurer said at the end of a visit to the region on Wednesday.

"People in Ethiopia, Somalia, and other parts of eastern Africa are increasingly caught between deadly extremes," Mr. Maurer said. "Conditions are either too wet or too hot and dry. People already on the run from violence may be uprooted again by droughts and floods."

Ethiopia saw the highest number of new displacements triggered by violence last year in Africa: 930,000, with another 426,000 displaced by droughts and floods. In the same period, IDMC recorded 500,000 displacements due to disasters and another 180,000 from violence and armed conflict in Somalia. [2]

The region started 2019 in drought and then experienced floods in May. It then swung back to drought before torrential rains in October and November unleashed the worst floods in decades.

Despite being least responsible for climate change, five of the 20 countries most vulnerable to its effects are in east Africa, including Somalia, which ranks first, according to available data gathered by the Notre Dame Global Adaptation Initiative. All of them have recently suffered from armed conflict or violence.

"This week I spoke with groups of women in Ethiopia who have suffered blow after blow. Their husbands have been killed, they were forced to flee violent clashes, some have suffered terrible sexual abuse and are now trying to build a life amid poverty, climate shocks and insecurity," said Maurer. "When violence and disasters overlap, people are often displaced from their homes not just once, but again and again, and often for long periods of time. This disastrous combination leaves families struggling to make ends meet and uncertain when they will return home, if ever."

[1] The IDMC continues to collect data on total displacements in 2019 due to droughts, floods, and violence or conflict. The figures here represent the most accurate estimates available in early January.

[2] The IDMC records internal displacements within a country's borders. It does not record cross-border movements. Because the IDMC counts displacements, these estimates do not represent the number of people who remain internally displaced from their homes today, as someone could have been displaced multiple times due to disaster and violence in 2019 and therefore counted more than once.