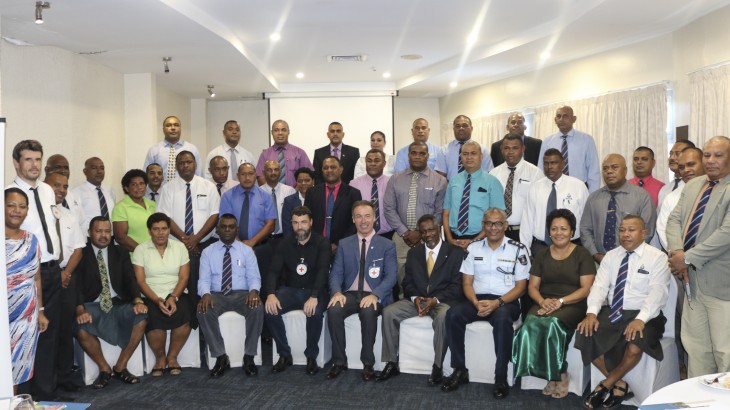 Suva (ICRC) - Two workshops on international rules and standards for members of the Fijian Police Force were conducted by the ICRC's regional delegation for police and security in Asia-Pacific, assisted by the protection and communications teams in Suva.

The first one-day workshop was designed for 35 Criminal Investigation Department (CID) officers from around the country and was held on 2 April. During the workshop, the ICRC sensitized officers on the basic principles of internationally recognized standards pertinent to law enforcement, with a focus on the use of force and firearms, arrest, transfer, investigation and detention.

The second workshop in the form of a round table seminar for another 35 senior police commanders, was held over two days from 4 to 5 April. The aim was to initiate discussion on international standards for policing and practicing. During the round table with the senior police officers, the challenges facing the police in the legal framework internationally applicable to law enforcement operations and the reality on the ground was discussed.

Both the CID workshop and the round table seminar followed a specific request from the Fiji police commissioner, Brigadier General Sitiveni Qiliho, responding to the challenges that his officers face regarding law enforcement. Brigadier General Sitiveni Qiliho opened the workshop and the round table and praised ICRC for its commitment to providing much-needed training for police officers in Fiji. He also issued a warning to police officers who abuse their powers that they will face the full brunt of the law.

The commissioner added that the workshops were also important for police officers to enhance their knowledge and understanding of international norms and principles applicable to law enforcement and perform their duties within the applicable legal framework and to protect and respect the rights of the citizens to avoid human rights violations.

Vincent Ochilet, the ICRC's head of regional delegation in the Pacific, thanked Qiliho for taking the time out of his busy schedule to open the workshop. "ICRC is indeed privileged to continue to witness his interest and strong support towards the development of the ICRC's training activities for the Fiji Police Force," he said.

Ochilet said the objective of the two workshops was to "promote a deeper reflection and awareness of the respect of international rules, domestic laws and internal police procedures through a theoretical and practical approach". He wished that the two events, which were the first of its kind in Fiji help to establish an annual high-level discussion between the police commanders and the ICRC on issues of relevance to police across the country.