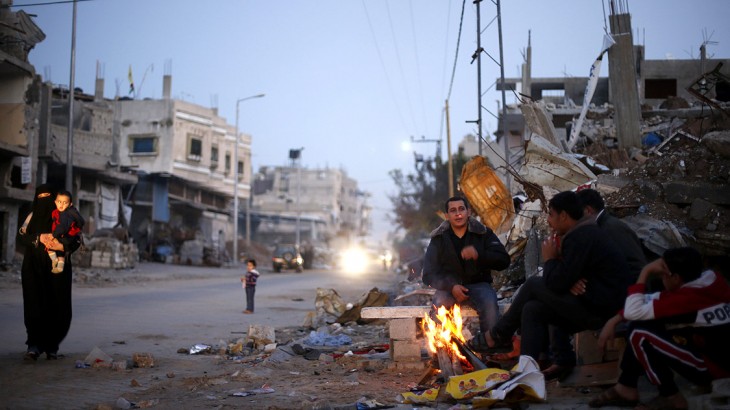 Gaza City, December 2014. People warm themselves by a fire near the ruins of houses. @Reuters / M. Salem

During his 15 months as head of the ICRC office in the Gaza Strip, Christian Cardon led the organization's humanitarian response to the 51-day conflict of last July and August. In his final interview in this post he describes the challenges faced by the people suffering the effects of the crisis.

What are the main challenges now facing people in Gaza?

Even before the latest conflict, Gazans already faced a host of daily problems, including high unemployment, poverty, restrictions on movement, fuel shortages and difficulty obtaining clean water and basic health care. In addition, they have only limited access to certain goods and building materials needed in their daily lives and to sustain the local economy.

Above all, Gazans need to rebuild their lives. It would be impossible to exaggerate the personal and collective trauma the conflict has inflicted on the people of Gaza, and the bleakness of the current outlook. Gazans need to rebuild hope and a dignified future for themselves, their families and their communities.

How has the ICRC responded to humanitarian needs in Gaza?

This summer's conflict caused widespread destruction of homes, buildings, infrastructure and farmland. During the hostilities, the ICRC provided assistance for the people most severely affected, and as soon as the conflict ended we further expanded our humanitarian work to help meet the needs of those who found themselves homeless. We worked very closely with the Palestine Red Crescent Society to save lives and take the wounded to hospital.

We maintained our deliveries of medicines and supplies to medical centres for the treatment of war-wounded patients. We brought thousands of blood units to Gaza. We also worked closely with the local authorities to carry out urgent repairs on water systems needed to restore water for 600,000 people, and on the electricity network to ensure that five hours of electricity a day would be available on average for the whole Gaza Strip. 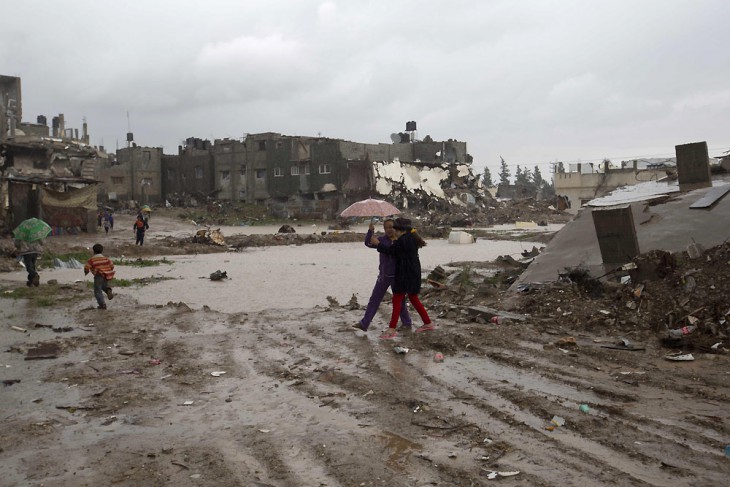 Gaza, November 2014. Two little girls sheltering from the rain in their way back home from school. Due to the irregular land level, pools of storm water were formed. CC BY-NC-ND /ICRC / El Baba

Since the conflict started in July, we have been supplying shelter materials, cooking equipment, buckets, hygiene products and other essentials to displaced people. We are still distributing this aid, and the number of recipients will soon surpass 160,000. In addition, we are now making a major effort to restore farmers' access to farmlands damaged during the conflict and to make sure that the land can be used productively again. The aim is to restore the fertility of almost half of the total farmland. In addition, as discussions take place on easing the process of exporting goods, we are working to help Gazans produce the goods themselves.

It is important to mention the painstaking work we carry out monitoring and documenting the way the conflict was conducted. Our delegates assessed the humanitarian impact of the conflict on the ground, and separate in-depth reports have been prepared for the parties involved. These assessments, framed in terms of the basic principles and rules that are applicable in all armed conflicts, form the basis of further confidential dialogue on compliance with the laws of war. There has been a clear lack of respect for international humanitarian law – the humanitarian cost has simply been too high – and this must never happen again.

What major constraints is the ICRC facing in Gaza?

The conflict ended some three months ago, yet many Gazans are still experiencing the anguish on a daily basis. Damaged infrastructure is in need of urgent repair, as are thousands of homes, but millions of tonnes of rubble have not yet been removed. We expect that large numbers of unexploded devices and other remnants of the conflict will be found which will have to be carefully disposed of before more civilians are harmed. Altogether, tens of thousands of Palestinians remain displaced and in need of basic assistance.

In addition to the contributions of humanitarian organizations and others to the recovery effort, the various authorities within and outside Gaza will have to shoulder their responsibilities and facilitate the reconstruction process. This cannot be delayed further. The swift entry of essential goods and supplies is required, but the ICRC has observed delays in imports which are impeding recovery efforts. Nevertheless, together with the Palestine Red Crescent we are intensifying our efforts to help people in need.

Palestinians and Israelis went through another episode of intensive conflict this summer. The ICRC did everything it could to help people in need, but no amount of emergency work and assistance from us could have met the expectations of people caught up in a high-intensity conflict and desperate for hope.

Let me also say how much I admire the resilience and the ability of the people affected by this conflict to cope in such difficult circumstances. It takes great determination and courage to start one's life over again after a conflict.

In the last 15 months, I have met many people from different horizons, in Gaza, Nablus, Hebron, Jerusalem and Tel Aviv. I can only say that I sense that people are exhausted and fed up with this continuous cycle of violence, which again this year did not bring any substantial improvement in their daily lives. We will of course continue to do our best to help heal some of the wounds and provide a coherent emergency response. What is needed now, however – now more than ever – is change and long-term solutions – which of course cannot be brought about by humanitarian organizations.

Shejaya, November 2014 A man takes wood from his destroyed house to kindle fire due to the cold weather.CC BY-NC-ND/ICRC/El Baba

Shejaya, November 2014. A woman cleans her damaged house due to the entry of the storm water. CC BY-NC-ND/ICRC/El Baba