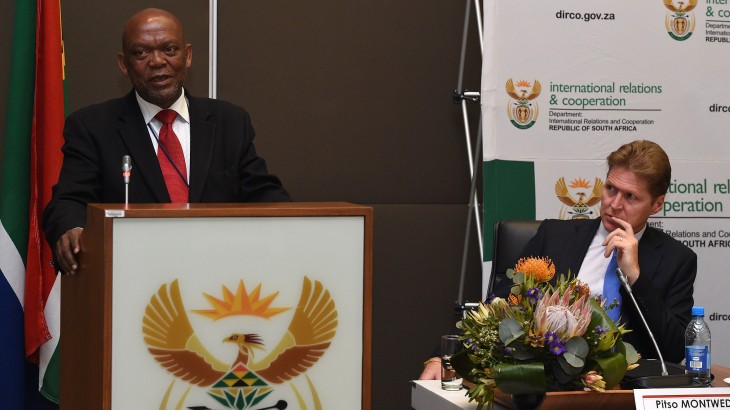 State representatives from 16 African countries gathered in Pretoria in September to reflect on the development of the law of war and the continued relevance of the Geneva Conventions.

The discussions took place at the 14th Annual Southern Africa Regional Seminar on International Humanitarian Law (IHL), an annual event co-hosted by the Department of International Relations and Cooperation (DIRCO) of the government of South Africa and the ICRC. This year it brought together government representatives from Angola, Botswana, Comoros, Democratic Republic of the Congo, Kenya, Lesotho, Madagascar, Malawi, Mauritius, Mozambique, Namibia, Seychelles, Swaziland, South Africa Zambia and Zimbabwe to review the current status of ratification and implementation of IHL in their countries.

Status of implementation of the Geneva Conventions in Africa

It was further noted that although many African countries have national legislation domesticating the Geneva Conventions, much of this legislation only domesticates the Conventions themselves and not their Additional Protocols. The ICRC encouraged states to revisit their implementation status of the Geneva Conventions, while many of the participants identified the ratification of Additional Protocol III as a priority for their country.

Continued relevance of the Geneva Conventions

The conflict landscape has changed significantly since 1864. In his opening address, Mr Pitso Montwedi, Chief Director, Human Rights and Humanitarian Affairs Directorate, DIRCO, reflected on this evolution of the battlefield: “Today’s wars have little in common with the battles of the 19th century. The fighting has gradually moved from clearly defined battlefields to populated areas. Traditional war between armies of opposing states is the exception, while non-international conflicts have become a norm. Nowadays, civilians are increasingly bearing the brunt of armed conflicts.”

Jürg Eglin, head of the ICRC’s Pretoria regional delegation, asked the participants whether the Geneva Conventions were still relevant today, and noted: “The answer is a clear yes. It is a matter of development and implementation of this body of law, and there we can make a difference.”

The seminar sought to unpack these changes and participants debated the impact of new technologies in warfare as well as the humanitarian consequences of certain weapons. For example, on the impact of drone technology and cyber warfare, Umesh Kadam, ICRC regional legal advisor, noted that in terms of article 36 of Additional Protocol I to the Geneva Conventions, all new weapons must comply with the basic principles of IHL, in respect of their development and use. Participants thus recognized that in spite of the changing landscape of warfare, developments do not occur in a legal vacuum, and the basic principles contained in the Geneva Conventions remain applicable. Participants concluded that given the evolution of warfare, political authorities must continue to be reminded of the relevance of IHL and the Geneva Conventions.

The humanitarian consequences of nuclear weapons, the call for nuclear disarmament and the relevance of these issues to Africa were points of discussion. Participants agreed that African countries should not be left on the side-lines of the debate as Africa is the largest nuclear weapon-free zone in the world. Yet while no African countries are currently developing nuclear weapons, Africa is in the supply chain of the materials needed to manufacture such weapons. The likelihood of a nuclear detonation in Africa may be relatively low, yet no state would be immune to the humanitarian consequences in the event of a nuclear detonation. The value of the African Union developing a common position was discussed, with the emphasis on the relevance of the issue to Africa and calling for disarmament of current nuclear stockpiles.

Sexual violence as a challenge to IHL

Sexual violence in armed conflict is a crime like no other because it can have devastating consequences on the victim, the victim’s family, as well as the entire community. Such far-reaching effects make it challenging for a state to respond to the needs of victims, whether emergency medical care or psychological and legal support. As such, the meeting noted the importance of establishing, in peace time, procedures to address these concerns should an armed conflict break out. Such procedures include criminalising all forms of sexual violence and establishing victim support structures such as counselling centres or support associations. In the interest of preventing sexual violence, participating states were encouraged to adopt mechanisms to safeguard the interests of vulnerable communities and to counter risks of exposure to sexual violence.

Armed conflict is not unfamiliar to many countries in Southern Africa. However, given the passage of time since the wars of national liberation, many regional participants who work on IHL matters do so amidst competing interests. The seminar served to bring seemingly distant issues ‘closer to home’, participants agreeing on measures to enhance the implementation of IHL in their region. These included structured peer-to-peer engagement between national IHL committees and the need to bring IHL issues before state parliaments and multi-lateral bodies.

With regard to the question posed at the outset – whether the Geneva Conventions were still relevant today – this was met with a resounding yes. As Pitso Montwedi observed: “Modern warfare brings with it various challenges, but war can be beaten. And prevention is one of the effective ways to go about this.”