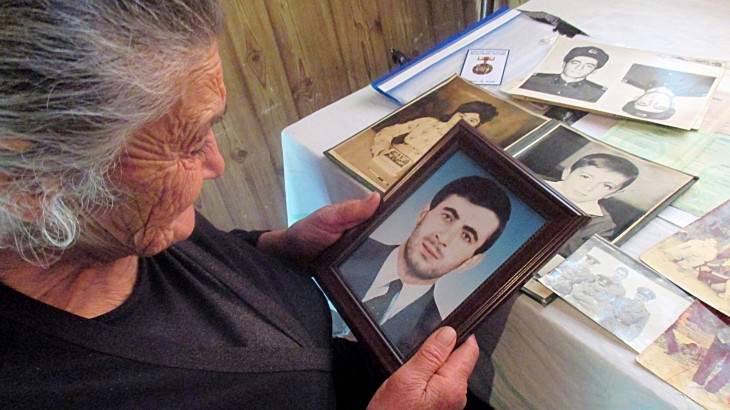 Ekaterine Gamgebeli gazes at a picture of her son Badri, who went missing during the armed conflict in Abkhazia 23 years ago. CC BY-NC-ND / ICRC / Diana Japaridze

Badri Gamgebeli went missing in September 1993 during the armed conflict in Abkhazia.

Over the ensuing 23 years, his family heard various stories indicating that he was still alive. Some days, Badri's mother Ekaterine believed he was indeed alive and would come back one day. On other days she would lose hope, thinking that if her son were alive he would somehow let his mother know, because the two of them had a special relationship. "Badri loved me most of all and he would never have allowed me to suffer. I knew that if he were alive he would make sure I knew," she said.

Badri's father Ushangi grew up without his own father, as he had gone missing during World War II. When he and Ekaterine got married they had to live in a room in a relative's house, as they had no home of their own. They started from scratch, working hard in their garden, selling fruit and vegetables and bringing up six children.

Eventually, the young couple built a house. But just when they thought everything was going smoothly, Ushangi died. Shortly after, war broke out and two of their sons went off to fight in Abkhazia; only one returned. As Ekaterine says, at least her husband was spared the pain of losing yet another family member.

Badri was the most active of the brothers. He liked socializing and helping people in the village, so everyone knew and respected him. While he was doing his compulsory military service, he used to write home to his mother. He wrote about his life, his friends and how he missed home, and especially his mother. For more than 20 years, when Badri was on the list of missing persons, Ekaterine read the letters over and over again. They gave her the strength to face reality. "I know those letters by heart. They are very dear to me. I hug them and keep them close to my heart as a precious gift left to me by my son," she explained.

In 2016, Badri's remains were identified, along with those of other people, under a programme that the ICRC is carrying out. His family decided to bury him at Tbilisi Brotherhood Cemetery, together with a number of other soldiers who have been identified. Now his family can visit his grave, bring flowers and light candles.

"I've been waiting for 23 years to find out what happened to my son," said Ekaterine. "This ambiguity has finally ended for me. Burying a son is an awful experience for a mother, but now at least I have his grave. I can go there any time, take flowers and talk to my son. I know many mothers who do not have this possibility and who still struggle with endless ambiguity. I am grateful to the ICRC, as they were with us throughout the process, ready to share our sorrow and our happiness."