Georgia: Initiative of families of missing people, memorial to be inaugurated in Tbilisi

Over 2,300 people, both civilians and military personnel, are still missing in Georgia since the armed conflicts of 1990s and August 2008. Meanwhile, their families have been spending years in uncertainty about what happened to their loved ones.
Article 15 March 2021 Georgia 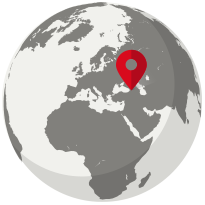 As part of a humanitarian effort to search for the missing, several burial sites were excavated throughout the region over the last decade, the remains of hundreds of people were recovered and nearly 200 families were given clarity about their loved ones through two coordination mechanisms chaired by the International Committee of the Red Cross (ICRC). Working with partner organizations, the ICRC also helped over 1,800 families to deal with the continued absence of their loved ones by giving psychosocial support and organizing activities to commemorate and preserve the memory of missing people.

To cope with their uncertainty, the families of missing people initiated a project to install a memorial in Tbilisi as a tangible reminder of the disappeared and to honour them. Jointly supported and sponsored by the ICRC and the Office of the State Minister of Georgia for Reconciliation and Civic Equality, the Missing Memorial will be inaugurated on 30 August, the International Day of the Disappeared.

Nana Kardava, member of the Tbilisi Committee of the Families of Missing Persons

"Creating a memorial for those who are still missing was our initiative. We spent hours discussing ideas, considering the experience of other committees that have already set up similar memorials in other cities and even arguing about different options and opinions. Once we had agreed on the design idea, we reached out to an art studio to create the memorial and the city hall to allocate an appropriate spot in Tbilisi.

This project has taken almost four years of intense work, but we can finally see the result.

The Missing Memorial will bring at least some relief to the families that have been waiting for years to hear about their loved ones. Now, they will have a specific place to gather with their children or friends to remember their missing loved one whenever they want to.

This is the only alternative for us right now to cope with the uncertainty.

We also expect that the memorial will help to change perceptions among the general public as people see and read about the thousands who remain unaccounted. So many people cannot simply disappear, leaving even more people in a state of perpetual uncertainty. Knowing that others sympathize with our struggles and stand by us even symbolically is very important."

The programme has been providing multidisciplinary support to the Families of the Missing Persons since 2010. It includes mental health, psychosocial, legal, economic, administrative and spiritual support, raising awareness about the needs of the families, adopting a scientific approach to the impact of disappearance on the families through an Academic Working Group, strengthening families' mutual network and accompanying them during search, recovery and identification process through the ICRC's local partner institutions countrywide.

"Families of missing people struggle to understand how to participate in important cultural and religious rituals because they don't know what has happened to their loved ones. They need something tangible to bring them relief. That is why the families themselves chose the design for the memorial.

It has forget-me-not flowers, a human silhouette with a void inside as a symbol of disappearance and a tree that symbolizes the eternal nature of life.

Based on our application, the Tbilisi City Hall has allocated a place in the central district for installing the memorial. The Office of the State Minister of Georgia for Reconciliation and Civic Equality, which sponsored the project along with the ICRC, was also actively involved in the process. The memorial is set to be inaugurated on 30 August, the International Day of the Disappeared."

"We hosted the members of the Committee of the Families of Missing Persons in our studio to introduce them to the process and get their feedback. The Missing Memorial was a very important project and we took it up with a great sense of responsibility. We have been working on it every day for the last two months and are satisfied with how it has taken shape. More importantly, the families of missing people, for whom the memorial has been made, like it."

"We have been supporting the families of missing people for years through the ICRC's Accompaniment Programme. This is a collective trauma with over 2,300 people still missing in Georgia and thousands more worldwide. Rituals are very important in such cases because they enable families to know that there are others who share their experience and will support them in this uncertain journey. The memorial is a symbolic reminder of those who are missing. It will help families to continue to bear their pain and cope with life while they wait."