Moscow (ICRC) – On November 17, 2020, Russian Minister of Foreign Affairs Mr Sergey Lavrov met with the International Committee of the Red Cross (ICRC) President Peter Maurer in Moscow, following an invitation from the Minister.

Mr Lavrov and Mr Maurer exchanged views on the pressing humanitarian issues related to the situation in the region of Nagorno-Karabakh conflict, Ukraine and Syria, COVID-19 and the continued relevance on international humanitarian law. 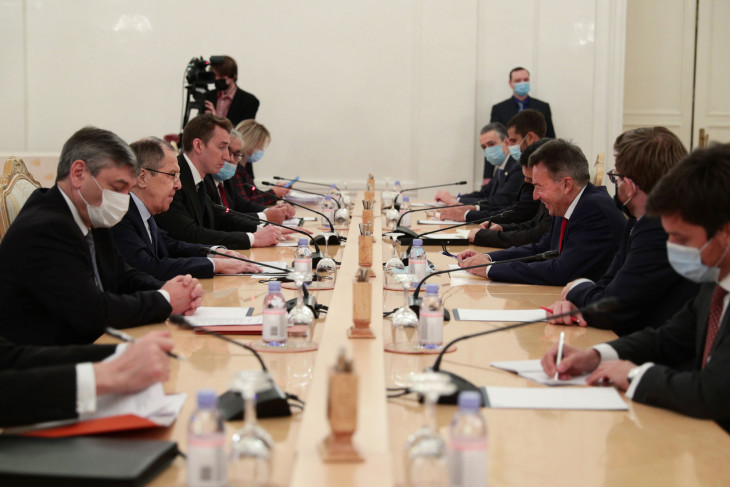 It has been recalled that the Russian Federation has been among the pioneer States to develop contemporary international humanitarian law (IHL). As much as modern warfare has evolved, the ICRC reiterated its position that IHL remains of acute relevance to reduce the suffering of people affected by armed conflict.

IHL application to the conduct of hostilities in densely populated areas such as urban settings, as well as in cyber world represents meaningful safeguards to the lives and dignity of people affected.

On Nagorno-Karabakh conflict, Peter Maurer stressed that the ICRC has been in the region for the last 28 years and able to establish trustful contacts with the sides. ICRC is eager to better cooperate with Russia, peacekeeping troops on the ground and with the parties of the region, to continue scaling up its delivery of neutral, impartial and independent humanitarian services to people affected.

Over the past couple of weeks, the ICRC has intensified its assistance, notably to people displaced, and it plans to continue doing so, notably with regards to retrieval and handover of bodies of fallen soldiers, as well as visit of detainees.

Along the line of contact in the Donbas, hundreds of thousands of people remain in need of humanitarian assistance and Peter Maurer reaffirmed the ICRC commitment to continue offering humanitarian services, including the rehabilitation of the water system that has been destroyed.

In Syria, the armed conflict, now in its 10th year, has been characterized by destruction on a vast scale, a refugee crisis that has reverberated around the world, and a shocking disregard for international humanitarian law. Some 11.7 million people are still in need of humanitarian assistance. The situation of civilians, especially children, in Al Hol camp and Idlib governorate is dire and unsustainable. Weapon contamination and missing family members in Syria have deep and lasting consequences.

Peter Maurer underlined that the Russian Federation has significantly contributed to help address some of the most pressing needs, with the repatriation of Russian children for instance. Humanitarian assistance is one contribution to create an environment in which Syrians who have been displaced may be able and willing to return home safely, while political progress is also needed.

In these situations, COVID-19 pandemic adds another layer of life-threatening risks on the lives of millions of people already suffering from the effects of armed conflicts and violence and may further jeopardize their socio-economic recovery. The ICRC is closely following-up the development of vaccines in many countries and concerned about ensuring access to safe and internationally recognized vaccines to people in fragile contexts.