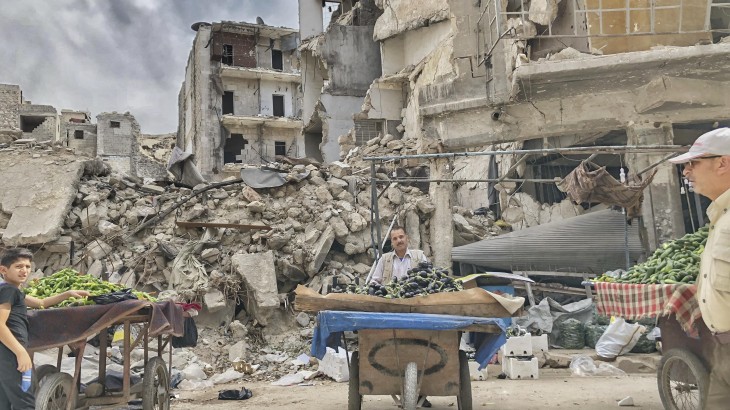 In conflicts across in the Middle East we are witnessing the devastating and senseless human cost of indiscriminate warfare and violations of international humanitarian law. Same story, different actors.

My recent visits to the region have confirmed the deep levels of suffering caused by disproportionate attacks, and the targeting of civilians and civilian services like ambulances, water stations and markets. Battles of retribution have been fought without regard for the impacts on civilians. And the seeds of radicalization, retribution are being sown for future years.

Urban warfare is an undeniable trend. Our figures show across four governorates in Iraq and Syria urban offensives have led to eight times more conflict related civilian deaths than in other areas over the past year.

We are seeing a unique politicisation of the humanitarian space which threatens neutral, impartial, independent, humanitarian action. Political dynamics seem increasingly less conducive towards political solutions, including in Syria, leaving fears about the stability of the region. Where there are encouraging steps towards stability, we are starting to see the complexity of the underlying problems which will need to be overcome.

When we asked people in conflict zones to define their major challenges, economic security was consistently ranked in the top few concerns, along with community tensions, sexual violence and displacement. Building resilience through livelihoods will be a key factor in recovery.

As the Syrian conflict moves into a protracted situation, with fewer or less visible frontlines, we hope that some people will have the chance to start rebuilding their lives. Our humanitarian action will support them, on both sides of the current or former frontlines. It will strive for sustainable humanitarian impact, to build on people's industriousness and to strengthen their capacity to overcome adversity.

While the international community will have to answer difficult questions about the long-term reconstruction of Syria and the political conditions, humanitarians still need to respond to people's needs and their wish to live with dignity. They cannot wait for political consensus. We will work to support people in rebuilding their houses, their basic infrastructure; to finding jobs and economic opportunities; to searching for their missing relatives, and reminding the authorities of the obligations towards their own citizens.

In particular, we will have to address the humanitarian consequences of some of the devastating impacts of urban warfare in Syria – just as we would in Mosul, in Saada or in Gaza. Our action will not be motivated by political considerations, but based on an independent and impartial assessment of the humanitarian needs of individuals and communities.

Importantly, humanitarian action for people in Syria should not be held hostage to controversies about return. The legal situation is clear: people who have been forcefully displaced have a right to return in safety and dignity. They also have a right not to be returned to situations where their rights are at risk. Humanitarian action can contribute to help returned IDPs and refugees to recover their lives just as it seeks to support those who have stayed - without, however, being used as a figleaf to return people forcefully.

We cannot forget that the conditions for IDPs and refugees to return do not merely depend on repaired water systems, but on safety and respect for their rights. Protecting people as they return is a key challenge for the future. Ensuring a space for humanitarian action that focuses on allowing civilians overcome the disruption of their lives could also provide a minimum basis of agreement among states.

Dear colleagues, while talk is of rehabilitation, we also cannot overlook the 'invisible' needs of people. These are as immense and as urgent as the visible scars. Humanity is not measured by the tons of relief items shipped and distributed but by the recovery of people in need. The grieving families of missing persons, those left detained, children who have never known a life without war.

ICRC teams have reported the distressing impact of the war on Syria's children: many have experienced psychological distress, violence and cruelty, others have injuries or have undergone amputations. They will require sustained care to recover their physical and mental health.

The children and families of foreign fighters, recently visited by our teams, also cannot be forgotten and deserve our humanity. Children need to have access to education and psychological support. They need to have a future. We will continue to seek access to all detainees, and we are setting ourselves up to help authorities tackle the daunting caseload of missing persons, which will continue to haunt the region for decades to come.

This lies at the heart of the mandate given to us by the international community. We will continue to engage with all parties to the conflict, to try to build a constructive dialogue about respect for IHL and the protection of the civilian population.