ICRC and the African Union commemorate 25 years of partnership 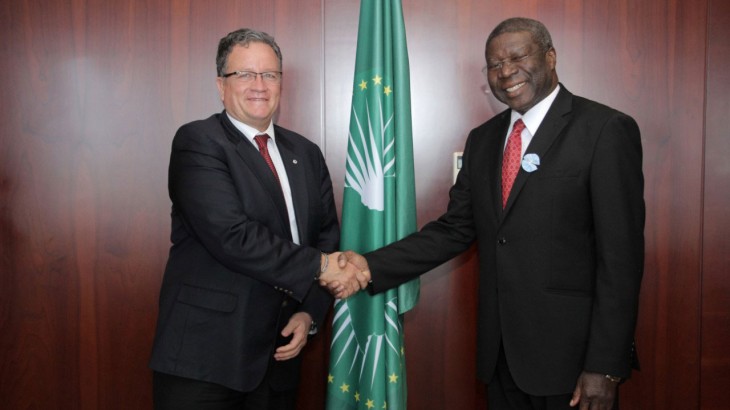 The ICRC and the African Union celebrated 25 years of Partnership, at a reception held in Addis Ababa, on 9 June 2017. Photo: African Union

The International Committee of the Red Cross (ICRC) and the African Union (AU) celebrated 25 years of Partnership, at a reception held in Addis Ababa, on 9 June 2017. The aim of the cooperation was to cooperate on humanitarian issues related to armed conflict, promote a better knowledge of, and respect for, international humanitarian law by AU member states and provide legal support to the AU Commission for the mainstreaming of IHL into decision and policies.

The AU and the ICRC have cooperated on issues related to: children and women in war, sexual violence in war internally displaced persons, refugees and migrants, Health Care, detention, Mine Action the preparation of mission documents for peace operations. They also cooperate on the promotion of international humanitarian law in Africa, including by holding bi-annual IHL Seminars.

The ICRC Head of Delegation, Felipe Donoso, further expressed its wish for a strengthened partnership with the AU, and especially with the organs it has been working closely with, namely the Peace and Security Department, the Political Affairs Department, the Social Affairs Department, the Office of the Legal Council, he African Committee of Experts on the Rights and Welfare of Children (ACERWC), the African Commission of Human and People's Rights (ACHPR). He further expressed his wish for a strengthened cooperation with the African Regional Economic Communities (RECs).

Donoso also underlined that the ICRC President, pays a yearly visit to the AU Peace and Security Council and briefs the PSC member states on the institution's activities aimed to tackle humanitarian consequences of armed conflicts and other situations of violence.

The event also featured a photo exhibition illustrating the various activities carried out by the two organizations in the last 25 years, a Cooperation Agreement between the OAU Secretary General, Salim Ahmed Salim, and the ICRC President Cornelius Sommaruga, on 25 May 1963.