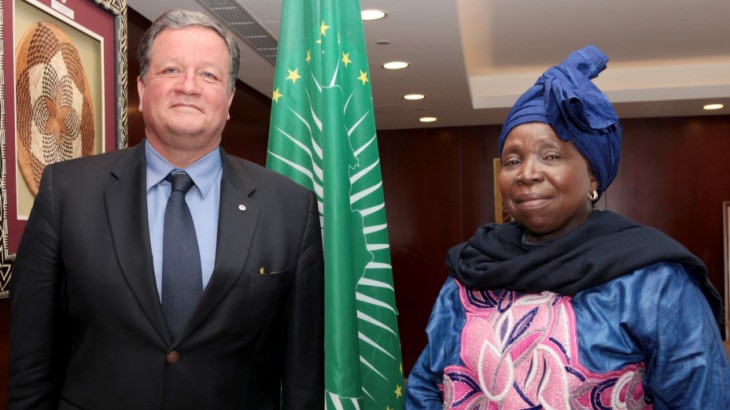 The new Head of the ICRC delegation to the African Union, Felipe Donoso, presented his letter of credence to the Chairperson of the African Union Commission, Dr Nkosazana Dlamini Zuma, on 11 February 2015. On this occasion, Dr Zuma commended the well-established cooperation between the two organizations in addressing humanitarian concerns arising from armed conflict and other situations of violence on the continent.

Mr Donoso assured the Chairperson of the ICRC's unrelenting commitment to maintaining and strengthening its collaboration with the AU. He also reiterated the invitation from ICRC president Peter Maurer for Dr Zuma to attend the 32nd Red Cross/Red Crescent Conference to be held in Geneva in December 2015, and to take the opportunity to visit ICRC Headquarters.

The ICRC has 33 delegations in Africa mandated with assisting victims of armed conflict and other situations of violence. The ICRC delegation to the African Union has had 'observer status' at the AU since 1992 after it signed a Memorandum of Understanding with the then OAU. Since then, the delegation has been working in close collaboration with the AU and its Member States through the sharing of experiences and exchanging of views on humanitarian concerns in Africa. It also engages with various actors to facilite the integration of international humanitarian law and other relevant norms in the policies and processes of the AU and its Member States.

Mr Donoso started his new appointment by participating in the 24th AU Summit, held from 26 to 30 January 2015 in Addis Ababa, following which he said he had acquired a "privileged induction into the key issues that are central to the AU's current agenda." Some of the priority concerns expressed by the AU during this Summit mirror those of the ICRC, in particular the plight of victims of armed conflict and other situations of violence in countries such as Libya, South Sudan, Mali and the Sahel, Nigeria, the Central African Republic and the Democratic Republic of the Congo. In these contexts, the ICRC, as a neutral, and impartial humanitarian organization, has been providing humanitarian assistance and promoting international humanitarian law. The Summit also deliberated on the need for a collective and targeted response to eradicate Ebola in those West African countries most affected: Guinea, Liberia and Sierra Leone. Red Cross/Red Crescent volunteers in the most affected countries, backed by the ICRC and the International Federation of Red Cross and Red Crescent Societies, have been among the first responders to the outbreak. The ICRC, within the framework of the Red Cross and Red Crescent Movement response to Ebola, which is being led by the International Federation, is also helping boost the health care systems in these countries, including those affected by armed conflict.

Proclaiming 2015 as the year of "Women's Empowerment and Development toward Agenda 2063," the AU is aiming to end gender inequality in all spheres of life and eliminate all forms of violence and discrimination against women and girls, including sexual violence. This context will provide an opportunity for the delegation to promote the ICRC's new approach to addressing sexual violence, with a focus on shifting the burden of proof from the victims, and supporting the categorization of sexual violence as a grave crime under domestic legislation. These measures will in turn promote the inclusion of all victims of sexual violence and will play an important role in its prevention and ensuring that perpetrators are made accountable.

Mr Donoso looked forward to "the ICRC's continued cooperation and engagement with the AU Commission, Peace and Security Council and other organs of the AU focusing on common priorities to bolster our efforts in addressing humanitarian concerns on the continent" as he commences his mission.