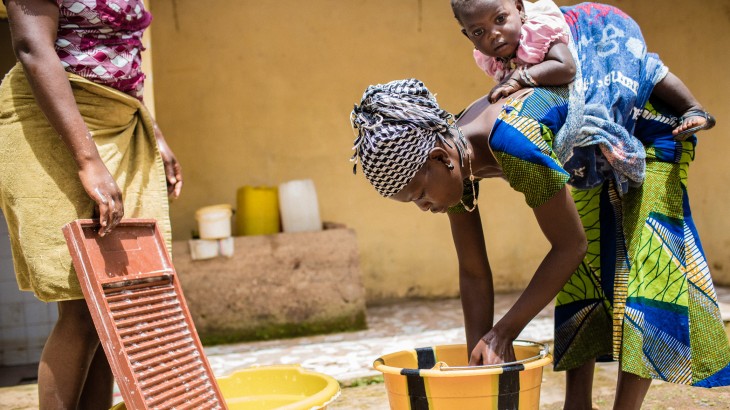 Pita, Guinea. A woman washes in water from a well installed with ICRC support.

The Donor Support Group (DSG) of the ICRC, made up of the organization’s major donors, is a privileged platform for exchange on key ICRC policies and programming. Members of the DSG have a unique access to the ICRC’s operations and staff that allows them to better understand the humanitarian challenges that the ICRC seeks to address.

The DSG was established as a result of the initiative of representatives of some governments who attended the Wolfsberg Humanitarian Forums and the ICRC round-table on preventive action in Copenhagen, Denmark, in 1997. During these events, the ICRC’s major donors expressed their wish to have more insight into the organization’s policy and programming.

In May 1998, the Dutch government facilitated an initial meeting between the ICRC and its 10 largest donors, each represented by their respective government officials in charge of humanitarian aid; these donors went on to become the DSG. The meeting covered topics such as the ICRC Appeals; the impact, cost-effectiveness and sources of income of the different types of ICRC programmes; coordination between the ICRC and its donors; and donor requirements. Members of the DSG were interested in developing informal but structured dialogue with the ICRC, with a view to enhancing mutual understanding and helping the organization obtain a more coordinated form of support from its donors. The ICRC likewise affirmed its interest in holding consultations such as these on a regular basis, and to be fully transparent about its policies and programmes.

Since then, the ICRC and the DSG have held yearly meetings wherein they examined, discussed and adapted their positions on a wide range of issues of mutual interest, such as:

Operational concerns: the assessment and definition of needs and priorities; project evaluation and result-based management; the priorities, cost-effectiveness and performance of programmes; project sustainability and phaseout strategies, which include the promotion of local ownership; the ICRC’s assistance policy and its relation to protection activities

Policy issues: the ICRC’s mandate – including its neutral, impartial and independent humanitarian action – and how the organization applies it in its activities; ICRC involvement during periods of transition and in peace-building activities; the ICRC’s prevention programme; the relevance of international humanitarian law (IHL) today; the ICRC’s endeavours to prevent or address IHL violations; coordination on humanitarian assistance among components of the Red Cross and Red Crescent Movement (hereafter Movement), the United Nations (UN), non-governmental organizations (NGOs), and other actors

Thematic issues: the ICRC’s operational approach to internally displaced persons, children and women; security-related concerns; the relationship between IHL and human rights law in armed conflict and other situations of violence; the use of force to protect civilians; the conduct of multinational corporations during armed conflict; dialogue with private military and security companies

Topics related to financing and reporting: the ICRC’s financial structure in the field and overall funding and financial management; the predictability and flexibility of funding, including earmarking; broadening the donor base; coordination with the UN-Consolidated Appeals Process (UN-CAP); standard reporting and auditing

   Be a government, a supranational organization or an international institution exclusively composed of governments

   The DSG annual cycle traditionally runs from June to May or June of the following year. It includes a series of events, namely:

Donor representatives based in Geneva are regularly invited to ad hoc briefings on specific operations and consultations on thematic issues.

 DSG members have exclusive access to ICRC reports, mainly through the ICRC Extranet for Donors. These reports can include specific field updates, results of assessments and evaluations, and operational and thematic updates on issues with humanitarian consequences.