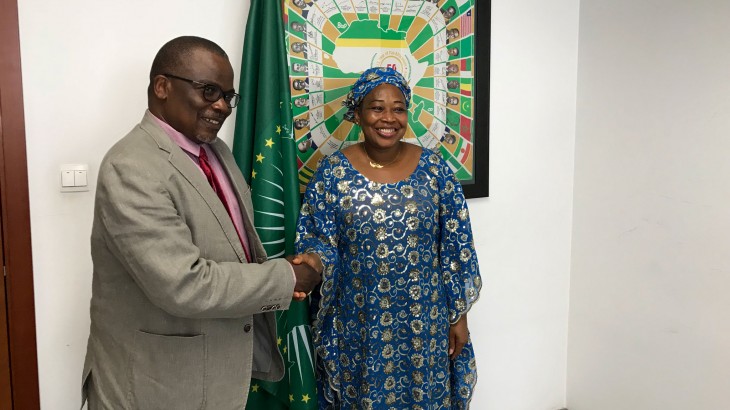 The ICRC Head of delegation to the African Union, Mr Jean Jacques Tshamala, accompanied by the Deputy Head of Delegation Ms Diane Misenga Kabeya, paid a courtesy call to the AU Commissioner for political affairs, Ms Minata Samate Cessouma, on 15 March 2018, at the African Union Headquarters.

On the occasion, Ambassador Cessouma expressed her readiness to strengthen the cooperation between AU DPA and ICRC. Commissioner Cessouma stated that this year's priorities for the department were free movement and corruption. She also flagged the establishment of the African Humanitarian Agency as a flagship project of DPA and called on ICRC support in this respect. HoD answered stating that while the ICRC's the institution could share the experience on the support landed to ECOWAS in its attempts to establish the humanitarian agency of the REC.

Mr Jean-Jacques Tshamala, in turn reiterated the ICRC readiness to support implementation of AU Humanitarian Affairs, Refugees and Displaced Persons Division (HARDP) priorities identified in 2018. He further expressed the ICRC's appreciation for the fruitful collaboration with the Department of Political Affairs (DPA) and informed of the upcoming arrival of an IDP Adviser to further support DPA effort in promoting the Kampala Convention at the continental level.

The ICRC representaive further expressed the instituion's readiness to cooperate with the AU Department for Political Affairs in view of the 14th joint AU-ICRC Joint Bi-annual IHL seminar planned in 2019. 2019 was declared by the Assembly the AU year of Refugees, Returnees and IDPs.