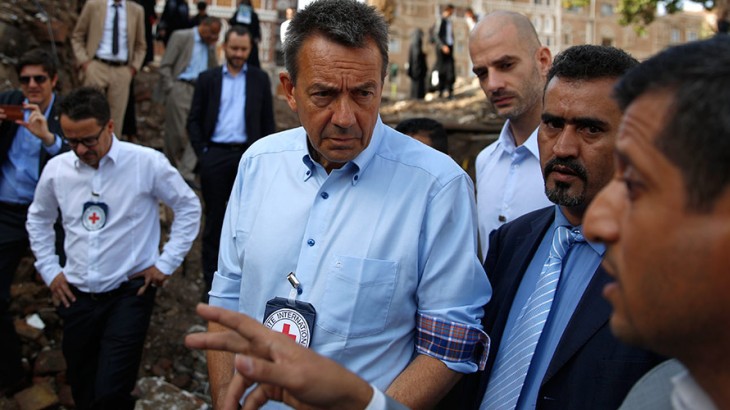 The President of the International Committee of the Red Cross (ICRC), Peter Maurer, has said he is appalled by the suffering he has witnessed in Yemen. On a three-day visit to the country, Mr Maurer visited areas affected by the ongoing conflict in Sana'a and Aden. He also held meetings with leading officials.

"The humanitarian situation is nothing short of catastrophic. Every family in Yemen has been affected by this conflict. The people are facing immense hardship. And it is getting worse by the day. The world needs to wake up to what is going on," said Mr Maurer.

It is estimated that, since March, nearly four thousand people have been killed and over 19,000 injured. 1.3 million have been forced to flee their homes.

"The compounded effects of intense fighting and import restrictions are having a dramatic impact on health care," added Mr Maurer. "Health facilities have been massively attacked as well as suffering collateral damage. Medicines can't get in so patient care is falling apart. Fuel shortages mean equipment doesn't work. Insecurity means vaccination campaigns don't happen. And of course, the fighting makes getting to hospital a dangerous venture. It's a terrible downward spiral that puts thousands of lives at risk.'

Since January, the ICRC has helped supply water to more than two million people and provided food and other essentials for more than 100,000 people. It supports health facilities by donating urgent supplies and equipment and by sending in surgical teams specialised in war injuries. But Mr Maurer said humanitarian organisations could only do so much:

"This cannot go on. Yemen is crumbling. As a matter of urgency, there must be free movement of goods into and across the country. Deliveries of food, water and medicine should be facilitated. Much more needs to be done. And minds need to be focused to find a political solution quickly," said Mr Maurer.

The ICRC has offices in Sana'a, Aden, Saada and Taiz. It employs over 250 staff members in Yemen of which 45 are international staff. It has doubled its operational budget for Yemen in the course of 2015, to 56 million Swiss francs.

The indirect impact of bombs in Sana'a old city

The indirect impact of bombs in Sana'a old city, explained.

Our President Peter Maurer is in Yemen to highlight the dire humanitarian situation in the country. #YemenCrisis

Posted by International Committee of the Red Cross on Sunday, August 9, 2015

Even wars have limits (video clips)