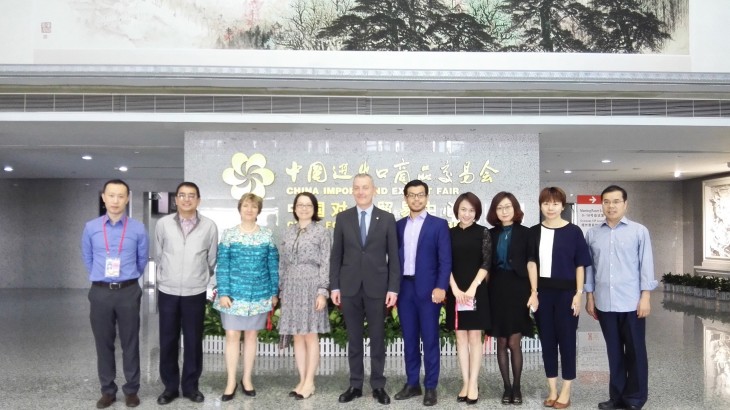 Marie Otaegui, Asia sourcing manager of the ICRC, said that they had initially bought Chinese goods through intermediaries and it was not until 2009 that they began to explore the Chinese market themselves.

Otaegui said the ICRC expected to buy 10 percent to 20 percent more Chinese products in the next few years.

The ICRC has sent representatives to the China Import and Export Fair (the Canton Fair) for the first time this year, to seek new opportunities with Chinese businesses.

Guangdong-based Chuangsheng Stainless Steel Products Co., Ltd., an exhibitor, is a major supplier of ICRC. The company recently produced more than 10,000 "disaster-relief boxes," each containing pans, bowls, knives, forks and other kitchenware, sufficient for a five-member family, to be sent to refugee camps in Kenya.

Chuangsheng has produced over 200,000 sets of tableware for ICRC every year since 2013. Chuangsheng products have been sent to centers in Amman, Nairobi and Abidjan, ultimately destined for humanitarian aid around the world.

Since ICRC has an ethical procurement policy, companies they work with must meet high standards, Otaegui stressed. Working conditions, child labor, hygiene, security and environmental impact are their major concerns.

ICRC has spent tens of millions of yuan on Chuangsheng products and Red Cross branches in Finland and Canada are considering buying from Chuangsheng via the ICRC.

Procurement by the United Nations and related international organizations reached 18 billion U.S. dollars in 2016, with indirect purchases from China accounting for 20 percent, while direct purchases only took up 1.29 percent, according to Yuan Lunxiang, vice chairman of the China Association for Promoting UN Procurement (CAPUNP).

There have been huge changes in Chinese enterprises in recent years, said Otaegui. An increasing number of Chinese technicians can speak English, making mutual communication easier than before and Chinese businesses more competitive.

"Since more Chinese now work in international organizations, those organizations have recognized the importance of the Chinese market and are willing to increase direct purchases from China," Yuan said.

Pierre Dorbes, head of the regional delegation for East Asia, ICRC, sees a bright future for the ICRC and China.

"Chinese small and medium companies can also be important, not only in supplying and providing us with good quality products... but also in developing products with them, that could be extremely useful for humanitarian aid programs," Dorbes added.

See the original story from Xinhuanet.com