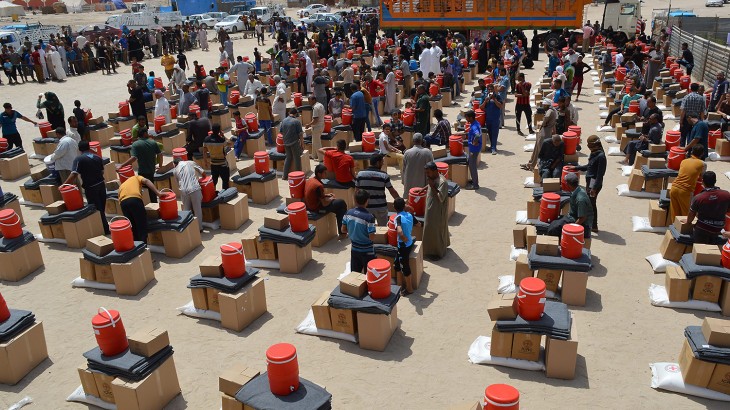 Relief materials such as food are prepared for distribution to families displaced from Ramadi.@ICRC/S. Salim

Recent fighting in and around Ramadi, the capital of Anbar province, has forced tens of thousands of people to flee to the cities of Baghdad, Habbaniyah and Amiriyat al-Fallujah, leaving most of their belongings behind. The International Committee of the Red Cross (ICRC) is bringing urgently needed aid to the displaced.

Parts of Anbar have seen spells of heavy fighting since early 2015, forcing people to abandon their homes. "We have distributed one-month food rations, water and other relief items to more than 11,000 people in Baghdad, Habbaniyah and Amiriyat al-Fallujah," said ICRC delegate Stephanie Eller, who has been helping those recently displaced from Ramadi. "But with rising temperatures and no hope of returning home for the time being, this is not enough to alleviate their suffering."

"We urge all the parties fighting in Anbar to do their utmost to spare and protect civilians," said Patrick Youssef, head of the ICRC delegation in Iraq. "They must also facilitate the efforts of humanitarian workers so that food, medicines and clean water reach people without delay."

The ongoing fighting is placing enormous strain on the health-care facilities in Anbar. The ICRC recently provided 15 dressing kits – containing enough supplies to treat over 1,200 patients – to Ramadi hospital. Furthermore, in agreement with the Federal Ministry of Health, the ICRC will be delivering surgical and other medical supplies to various hospitals in Anbar in the coming days. "Availability of health care is fundamental to saving lives," said Patrick Youssef. "Hospitals and health workers must remain operational during conflicts, which is only possible if all the warring parties cooperate to this end." 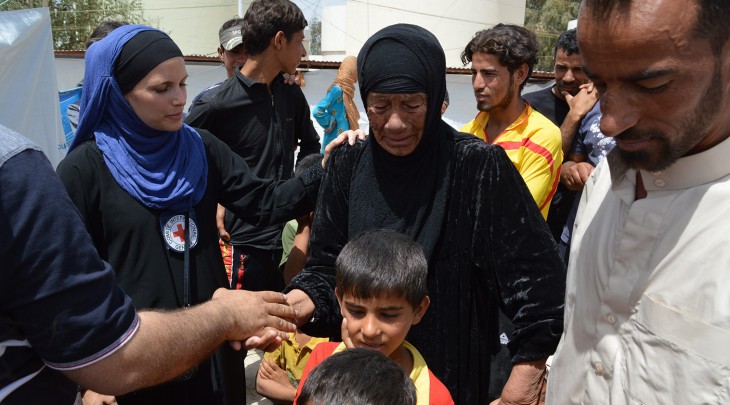 An ICRC delegate offers aid to an old woman forced to flee her home in Ramadi and seek safety in Madina Siyahiah.©ICRC/L. Sabri

Since January, the ICRC has provided food and other relief items to over 30,000 people displaced from Anbar, including those who fled to the neighbouring province of Salaheddin. ICRC teams have distributed bottled water to thousands of displaced people in Baghdad, and its engineers have repaired water supply systems serving over 21,000 people in Anbar province. All these efforts to support the Iraqi communities who are bearing the brunt of conflict will continue and be stepped up in the coming months.

The displaced tell their stories

People forced to flee Ramadi are provided with food and other relief materials by the ICRC in Habbaniyah. ©ICRC/S. Salim