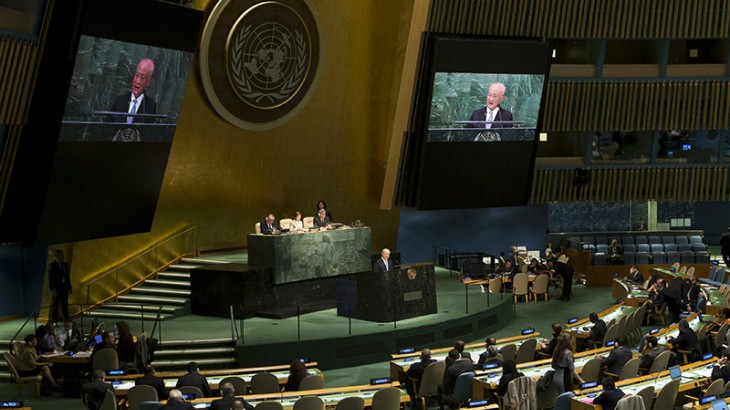 An important UN-hosted conference to review progress on curbing the spread of nuclear weapons and nuclear disarmament has ended in failure. The 2015 Review Conference of the Treaty on the Non-Proliferation of Nuclear Weapons (NPT) met from 27 April to 22 May in New York and concluded with participating States unable to agree on an outcome document.

This document would have set recommendations to advance the implementation of the NPT over the next 5 years. The deadlock came when States were unable to agree on the terms for the convening of a conference to make the Middle East a region free of nuclear weapons and other weapons of mass destruction. Louis Maresca, senior legal advisor in the ICRC's arms Unit discusses the significance of the outcome.

What does the failure of the NPT Review Conference mean for nuclear disarmament?

There's no doubt that the failure of the Review Conference to agree on an outcome document is extremely disappointing and a missed opportunity to advance the elimination of nuclear weapons.

For the Red Cross and Red Crescent Movement the prohibition and elimination of nuclear weapons remains a humanitarian imperative and in light of their severe humanitarian consequences, the ICRC continues to urge States to ensure that nuclear weapons are never again used. They must also urgently pursue negotiations to prohibit the use of and completely eliminate nuclear weapons through a legally binding international agreement in accordance with existing obigations.

So action on nuclear disarmament can still be taken?

Yes. Despite the result in the NPT Review Conference, States Parties remain bound by the terms of the treaty and the commitments adopted at earlier NPT meetings. Action by the nuclear-armed States is particularly important given the risks of intentional or accidental nuclear detonations. Nuclear-armed States must, as a matter of urgency, take concrete steps to reduce the role and significance of nuclear weapons in their military plans, doctrines and policies, reduce the number of warheads on high alert and to be more transparent about action taken to prevent accidental detonations. Many of these steps derive from long-standing political commitments and action plans.

Where do we go from here?

At this stage, the next steps on nuclear weapons at the multilateral level are unclear. The 70th anniversary of the atomic bombings of Hiroshima and Nagasaki in August this year will be an occasion to recall that concrete steps towards nuclear disarmament have still not been taken. The NPT failure will likely also be discussed in the annual meeting of the UN General Assembly.

What is the ICRC's view's on the proposal for a nuclear free zone in the Middle East?

Treaties establishing nuclear weapons free zones are important instruments and consistent with the Movement's call for States to ensure that nuclear weapons are never used again. States should adhere to such instruments if they have not already done so. It is unfortunate that progress in establishing such a zone in the Middle East has been slow. However, in our view, the creation of such zones is not a substitute for a global multilateral agreement to prohibit and eliminate nuclear weapon once and for all.