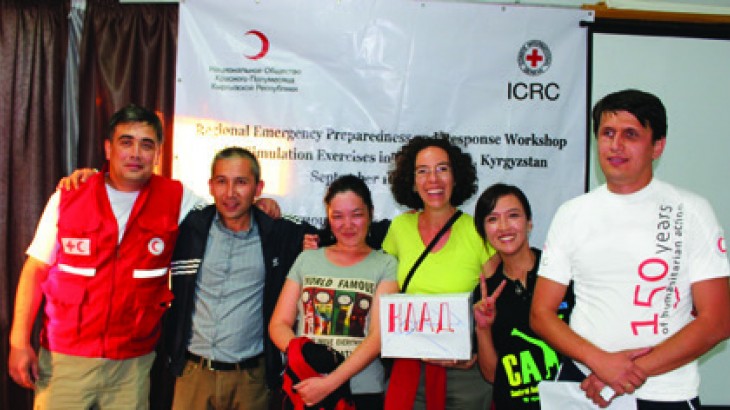 Participants at the emergency preparedness and response workshop, with the then head of delegation, Katja Lorenz. CC BY-NC-ND / ICRC

Active in Kyrgyzstan since 1992, the ICRC works to protect and assist people affected by tensions or violence and people detained for security reasons, while providing support regarding health-related issues, in particular tuberculosis (TB) in places of detention. In 2015 so far, the ICRC has continued to focus its activities on places of detention. It is also supporting the authorities to develop emergency preparedness/response measures and protocols, helping the national Red Crescent society strengthen its capacities, and promoting humanitarian principles and international humanitarian law (IHL).

Since 1999, the ICRC has been visiting people deprived of liberty in Kyrgyzstan. Through technical and material support, it helps the authorities ensure that detainees' treatment and living conditions, including their ability to restore and maintain links with their families, are in line with internationally recognized standards.

Over 7,110 people held in places of detention run by the Ministry of Interior, the State Committee on National Security (SCNS), the State Drug Control Service and the State Services for Execution of Punishments (SSEP) received ICRC visits, conducted according to the organization's standard procedures.

For many years, Penal Institution 31 underwent infrastructural and maintenance work, supported by the ICRC, with a view to establishing a central treatment facility for up to 340 detainees with various forms of TB. Although some infrastructural works are still ongoing, all TB-affected detainees have now been placed together in this facility. Infrastructural works will be completed in 2015.

The ICRC and the Kyrgyz authorities are also working together on a pilot project in five temporary places of detention to ensure that all inmates have access to medical care of equivalent standard to that provided outside the penitentiary system. 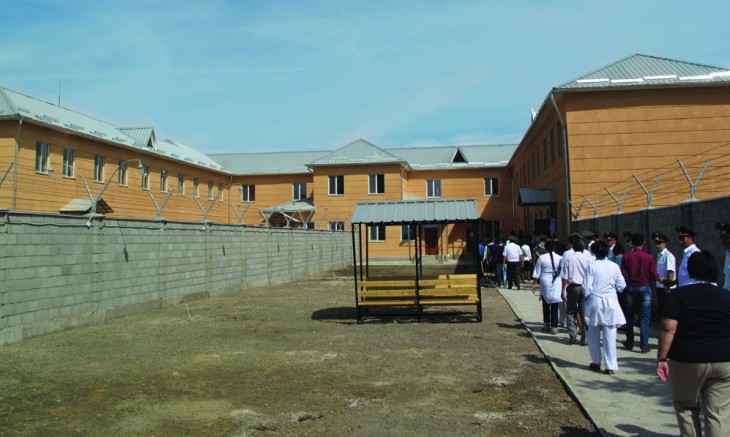 The ICRC is subsidizing travel costs of vulnerable families of detained people. In 2014, 272 families registered for the program and 144 of them received assistance. In 2015, over 6,160 detainees were kept warm and clean and enjoyed better conditions during 174 family visits, thanks to ICRC distributions of blankets, mattresses, hygiene kits and other essential supplies; books and recreational items helped ease their confinement. 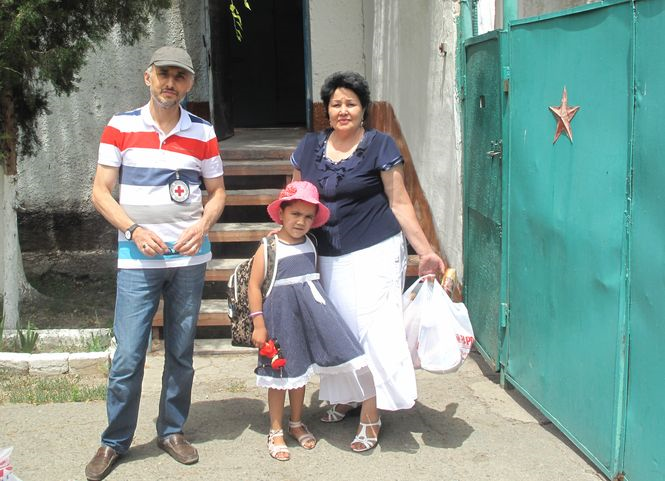 The ICRC is supporting the authorities' efforts to give the families of missing persons better legal rights, provide them with assistance, clarify the fate of missing persons and mitigate the risk of further disappearances. On 30 August, International Day of the Disappeared, a ceremony was organized in Osh in memory of people who went missing during the events of June 2010.

The situation of people in the south of the country and other tension-prone areas was monitored by the ICRC. The ICRC encouraged the government to prepare to meet humanitarian needs in emergencies. Surgeons were trained on how to treat patients with multiple injuries resulting from violence and/or natural catastrophes, on how to deal with mass casualties and manage human remains and trained/equipped first responders and other specialists in first aid and restoring family links.

- An EPR workshop brought together personnel from the National Societies of Kazakhstan, Kyrgyzstan, Tajikistan, Turkmenistan and Uzbekistan in lssyk-Kul.

- First responders and other specialists from Red Crescent Society of Kyrgyzstan, EMERCOM, the Ministry of Internal Affairs and the Republican Forensic Bureau of Ministry of Health attended courses conducted by the ICRC on the Management of the Dead in Emergencies in Bishkek and in Osh.

- 20 medical staff and 20 professors of medicine learned about emergency treatment for patients with multiple injuries. 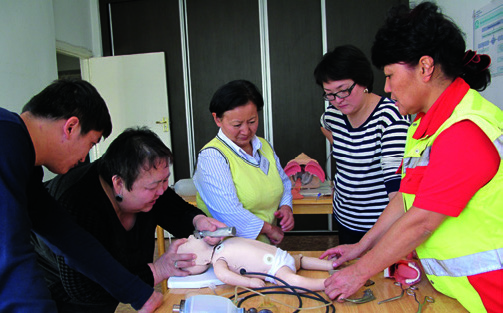 The ICRC carried out repair works to health facilities, specifically on general practitioners' centers in Halmion and Begabad.

The Halmion center serves a population of 18,000, including people from 13 neighboring villages, and is located just 300m from the border with Uzbekistan. The ICRC donated a fully equipped ambulance car to the Ak-Suu general practitioners' centre in June 2014, following its refurbishment in 2013. In addition, it provided construction materials to water users' associations at the Masy Sai river crossing and Kochkor-Ata water board in Jalal-Abad region for them to improve the water supply system in the areas they cover. 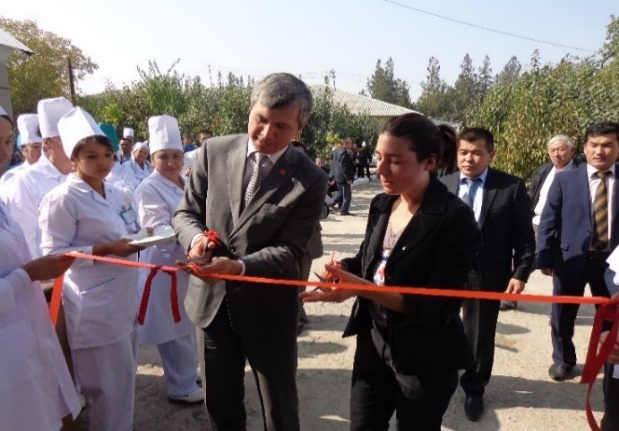 Emergency preparedness is driven by humanitarian protection needs, with a particular focus on sensitive areas (in and around enclaves and exclaves, along disputed borders and in fragile multi-ethnic communities), while the response will be multi-disciplinary, including prevention, protection and assistance-related activities.

With ICRC support, the authorities worked towards incorporating IHL in domestic legislation; military personnel, police officers and members of civil society broadened their understanding of IHL, the ICRC and humanitarian issues, including those addressed by the Health Care in Danger project. Contact with traditional leaders was being developed. 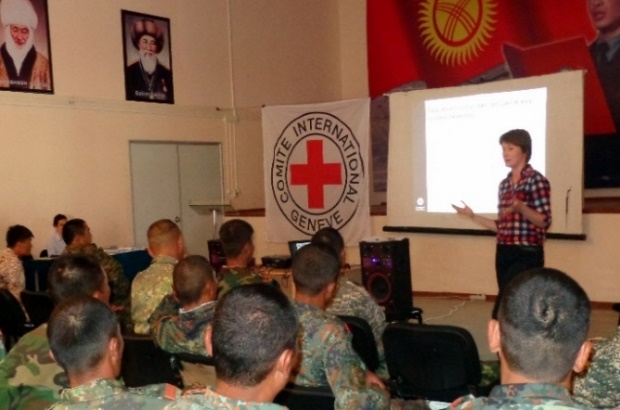 In 2014, the ICRC participated in the Collective Security Treaty Organization (CSTO) military exercise held in Kyrgyzstan, carrying out two presentations on IHL for commanders and troops.380 officers of the Ministry of the Interior, the State Border Services and the Ministry of Defence attended presentations on the ICRC's activities and IHL In 2015, 18 middle-ranking and senior level officers from the General Staff of Armed Forces, Ministry of Defense, National Guard and State Border Service participated in the "Advanced course on the Law of Armed Conflict" in Bishkek. 15 members of the national IHL Commission participated in ICRC-organized training on thematic issues of international law.Promoted by the national IHL Commission, with ICRC support, the Convention on therohibition of military or any hostile use of environmental modification techniques (ENMOD) was ratified by Kyrgyzstan.The ICRC provided support to 5 IHL Resource Centres in Bishkek, Osh and Naryn. In 2014, 14 journalists from the three southern provinces of Kyrgyzstan participated in a training on "Reporting in conflict situations" in Osh, co-organized with the Institute for War and Peace Reporting (IWPR).

To mark the 150th anniversary of the ICRC (in 2013) and of the original Geneva Convention (in 2014), the Swiss embassy and the ICRC delegation staged an exhibition titled "War from the victims' perspective" in Bishkek and Osh. The exhibition featured 60 works by Swiss photographer Jean Mohr. 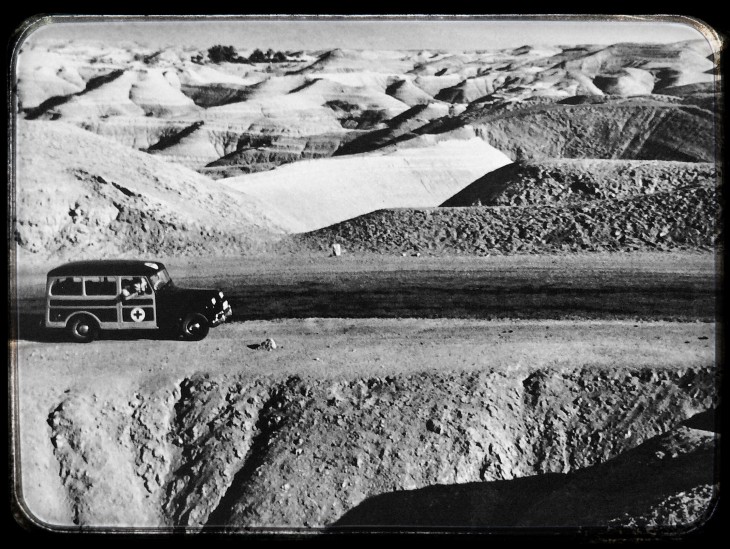 Palestine, 1950. An ICRC vehicle on the road between Jerusalem and Jericho. One of the photos in the exhibition "War from the victims' perspective." © Jean Mohr/ICRC

Support for the National Society

With the support of the ICRC, the Red Crescent Society of Kyrgyzstan (RCSK) reinforced its emergency preparedness and response capacities, particularly in first aid and psychosocial support. It further consolidated its competency in re-establishing family links and disseminating basics of international humanitarian law and universal humanitarian values.

The RCSK purchased emergency equipment for its branches, replenished First Aid kits and received technical and other support for developing its family links services.

In 2015, 18 RCSK staff and volunteers attended the course on "Camp management and water distribution in emergencies", organized by the ICRC. 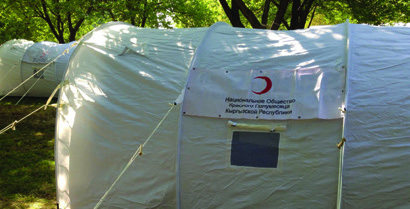 A tent erected by participants during the water and camp management course. CC BY-NC-ND / ICRC

In 2015, the ICRC mission in Kyrgyzstan was re-integrated into the regional delegation in Tashkent, Uzbekistan. It maintains its main office in Bishkek with two other offices in Osh and Batken.

See the Kyrgyzstan chapter of the ICRC Annual Report.