On Palestinian Prisoners day, a letter from the heart 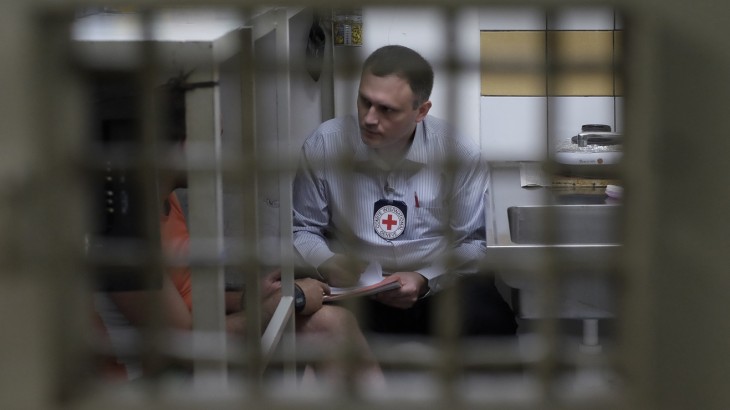 An ICRC delegates is seen from behind the bars, speaking to a detainee in private. Eshel Prison, Israel @ICRC. 2016

Today, on Palestinian Prisoners day, my thoughts go to the thousands of detainees we visit in Israeli places of detention. I am also troubled by the gap between the expectations of the Palestinian detainees' families on me, and the reach of my organization's mandate.

ICRC delegates have been visiting Palestinian detainees in Israeli detention facilities for over 50 years now. It has been at the forefront of our priorities for decades.

Years have passed. Detainees have changed and delegates have shifted, but ICRC's mandate and responsibilities have remained the same. 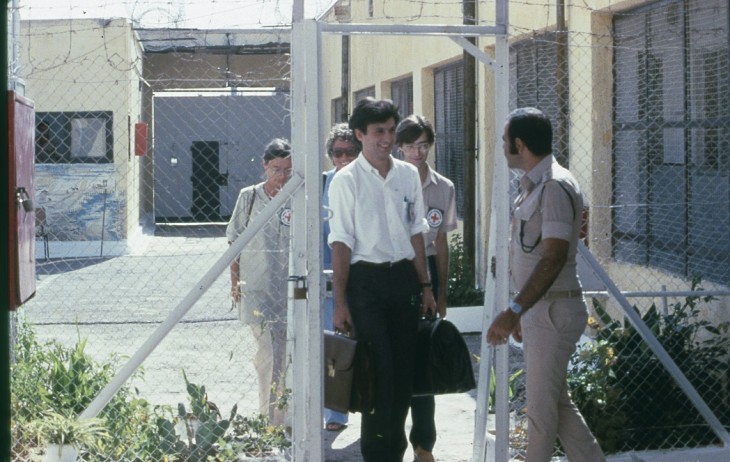 ICRC delegates are seen conducting a visit to a prison more than 25 years ago. Ramallah, West Bank @ICRC. 1981

A husband and a proud father of two little girls, I have been in charge of managing ICRC's visits to all Palestinian detainees in Israeli detention facilities for 18 months now. I have visited all interrogation centers in Israel and 12 of its prisons and have spoken to more than a hundred detainees. I have met chief representatives of all Palestinian factions in prison. We have talked about all earthly and heavenly things – aspirations, fatherhood and travels but also administrative detention, long term isolation, and communication with loved ones.

Eighteen months into my current position, I have closely followed 24 individual hunger strikes and one collective hunger strike in the summer of 2016.

Understandably so, hunger strikes tend to attract media attention. In doing so, they catapult us, and the detainees concerned, into the limelight. Unfortunately, this also leads to wrongfully placed expectations on various entities, including the ICRC.

Hunger strikes are a form of protest. We respect any detainee's decision to start a hunger strike. We neither support it nor condemn it. As a neutral humanitarian intermediary, we will never advocate for the end of a hunger strike, or for the concerned authorities to agree with the striker's demands.

So what do we actually do when a hunger strike begins?

In the event of a collective hunger strike, we step up the frequency of our visits and the human resources cadre conducting these visits. Our delegates and doctors visit detainees regularly throughout their hunger strike. They provide them with information about the consequences of the hunger strike on the detainees' health and well-being and ensure that their wishes as patients are respected. In accordance with the principles of medical confidentiality, we do not provide updates on a striker's medical condition publicly even if we were to receive recurrent requests from the media.

We do, however, update the detainees' relatives on their conditions in accordance with their wishes – an emotional and daunting task, if you ask me. 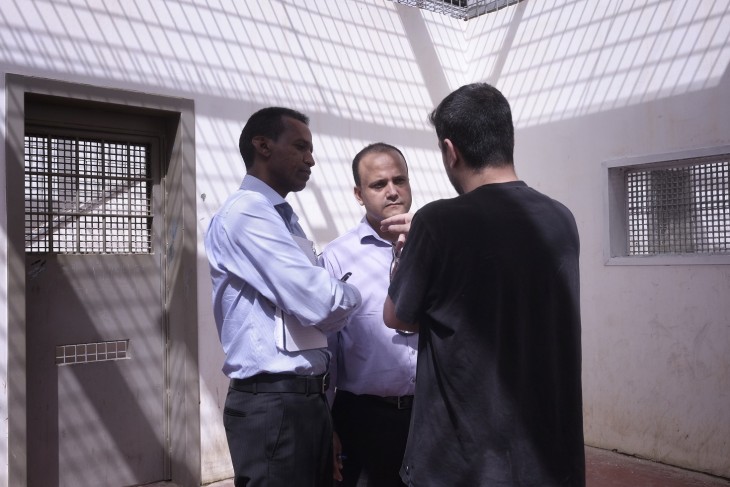 An ICRC doctor speaks to a detainee with the help of an interpreter about the medical care he is receiving in detention.Eshel Prison, Israel @ICRC.2016

Many detainees request us to conceal their deteriorating health conditions – as a direct result of their hunger strike – from their families. One of them justified his request with a heart condition his elderly mum had. He feared that any news of his poor health would result in serious complications for her. She was his rock. He couldn't imagine what would happen to him if he lost her.

I understand the detainees' desperation and their need to resort to a non-violent method to protest or demand certain issues. At the same time, I also acknowledge the grave health consequences that can be triggered by hunger strikes along with emotional distress to the detainees' families.

With a fresh bout of hunger strikes beginning today, I would like to seize this opportunity to call on detainees, their legal representatives and the relevant authorities to prioritize dialogue and reach solutions that evade irreversible consequences to detainees' health. I would also like to call on all involved entities to avoid leaking the detainees' health conditions. This only causes mental anguish and distress for the detainees' families and loved ones.

Having said the above, let me affirm my unwavering commitment – and that of the entire ICRC – to do all that is within the reach of our mandate and to deliver on our responsibilities.

I understand that many believe that there is discrepancy between what we provide and what many would like us to provide, but that only exists in people's minds. We have always been clear and outspoken with what we do provide and we will continue to do so.

After eight years of working in detention centres, I certainly believe that what we do brings about a positive difference. Detainees have repeatedly told me so themselves. "I could sell everything I have in exchange for the news you bring me of my family," one detainee said to me. "You are the only person I have seen in a long-long time. You are a ray of hope to me," another, in solitary confinement, said to me.

I take pride in hearing statements like the above and in knowing that, deep down, my colleagues and I are able to bring about a change in many people's lives. Failed expectations notwithstanding.

Raad Al-Husban is the deputy protection coordinator for the International Committee of the Red Cross in Israel and the Occupied Territories. He has more than 11 years of experience in the humanitarian field. He has worked in numerous countries including Sudan, Yemen, Chad, Somalia and Georgia.