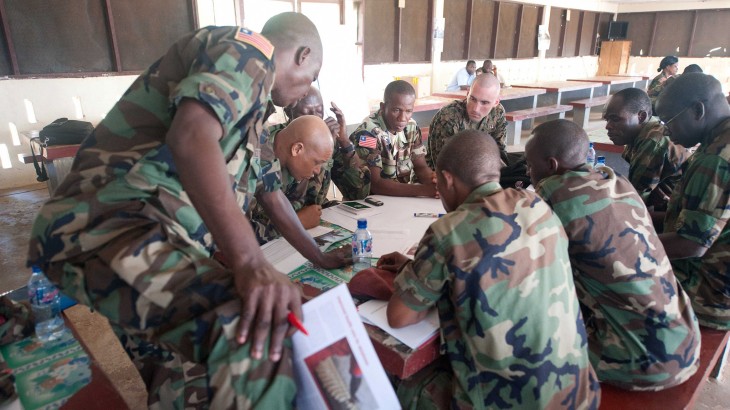 Liberia. Monrovia, Edward Binzah Kesselly military barracks. Training session for the Armed Forces of Liberia, set up with the help of the ICRC, about the conduct of search operations and interventions at checkpoints. 01.06.2015 CC BY-NC-ND/ICRC/Yamila Castro

The Armed Forces of Liberia (AFL) recently incorporated HCiD recommendations into their military training manual with the help of the ICRC. The manual now includes an entire chapter on HCiD, setting guidelines for Liberian soldiers to carry out military operations while preserving people's access to health-care services.

In true military fashion, the day starts early for some 20 officers of the AFL brought together in the Barclay Training Centre at their headquarters in Monrovia. The officers have a mission to accomplish: draft new guidelines which will strengthen the existing rules and facilitate the work of both the military and medical personnel.

One of the officers, Captain Golafale explains what is at stake: "Military operations and health care are closely connected. Sometimes we say doctors and nurses are our best friends. When we carry out operations, we know we need to protect and respect them because we will have injuries resulting from our operations. This relationship is very important."

Nester Urey, an ICRC legal adviser, adds: "What we do [at the workshop] today will definitely have an impact on generations to come."

"If you are a military commander, and you have to carry out an attack near a medical facility, you need to know how you can guarantee the safety of the medical personnel and patients in there. You need to carry out an assessment. After that, you know the level of force you can use," continues Captain Golafale.

"Before you launch an operation, every soldier from a private to a highest commander must know not only the goal of the mission, but also their rights and responsibilities. IHL stipulates that medics must be allowed to evacuate victims, combatant and civilian alike, from the conflict zone," he adds. 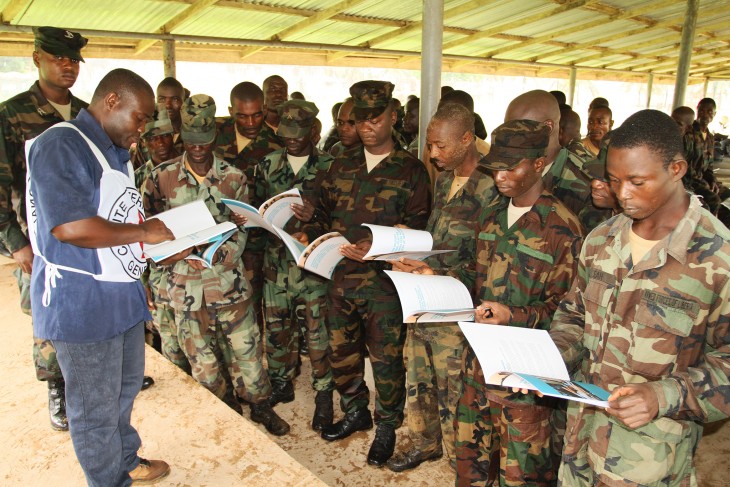 Liberia. The Armed Forces of Liberia learn about HCiD as part of their training in international humanitarian law. CC BY-NC-ND / ICRC

The workshop ends after two days of intense discussions. It did not take long to bear fruit. Only a few months later, HCiD issues were included in chapter 13 of the Armed Forces of Liberia Law of Armed Conflict Training Manual.

The chapter provides detailed procedures on the precautions to be taken during attacks, ground evacuations, search operations in health-care facilities, and other situations where medical personnel, facilities, ambulances, ships and aircraft are protected by IHL. The possible consequences of military action in various scenarios on medical personnel and their patients are discussed. In addition, there are recommendations for training that ensure the law is respected and health-care workers and the sick and wounded protected during military operations.

Captain Tarplah, Chief of Public Affairs, says: "Developing operational guidelines on how to interact with health workers that allow the protection of health facilities, personnel, patients and visitors is key. It is not our intent to harm them, but to carry out operations in a difficult security situation."

He also explains how civilians are affected and must therefore be better informed: "These guidelines are in everybody's interest. If access to health care during crises in Liberia is safe, people won't be afraid to go to hospital. It is important that our civilian population not only knows, but also feels that IHL protects them."

The Monrovia workshop built on the outcomes of the HCiD international consultations held in Sydney in 2013. There, 27 experts from around the world discussed military operational practices which could bolster the protection of health care in times of armed conflict.

These practices are presented as practical recommendations and locally implementable measures addressed to State armed forces in the publication Promoting Military Operational Practice that Ensures Safe Access to and Delivery of Health Care.

These practices are to be adopted when planning and carrying out military operations to avoid a negative impact on the delivery of health care in armed conflict. The armed forces can incorporate them into military orders, rules of engagement, standard operating procedures, training manuals, and so on.