Living with earthquakes in Nepal: “When is it going to finally be over?” 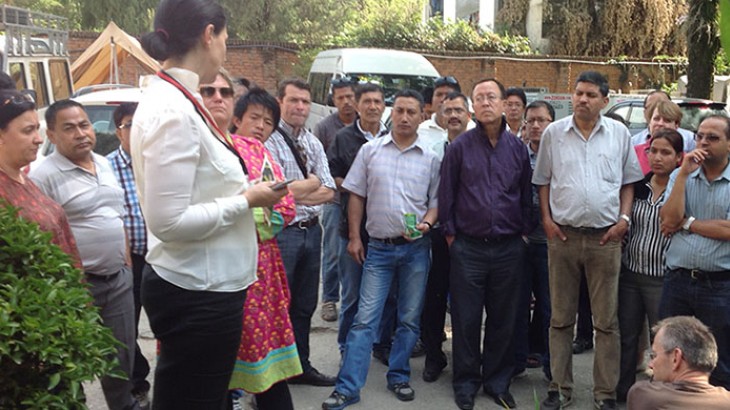 There is one thing all of us in Nepal have struggled to do since 25th April: live with uncertainty.

The hundreds of aftershocks that followed the 7.8 magnitude earthquake on that Saturday had been slowly decreasing in their intensity. I had come to keep calm at the new jolts that would punctuate our days and nights, even not noticing the "mild" ones when I was concentrated on the tasks at hand.

Then, I was in front of my computer in the ICRC in Kathmandu on 12 May when the ground started shaking again. I ran to the nearest door frame, previously identified as a safe area. A colleague joined me. We waited there for what seemed like a terrifyingly long time, as the building swayed, the floor thumped and, worse than anything, the movement got increasingly violent.

When we could finally get outside, thoughts started rushing in: is everyone here? Are my husband and son safe? What happened to our teams in the field, to our staff in the south of the country?

Around me, colleagues were frantically trying to reach loved ones, battling jammed networks. One staff member was hugging someone who was desperately sobbing. As details on the epicenter of the quake trickled in, the tension became even more palpable on the faces of the colleagues who had their families there. Their houses had already been destroyed in the first quake. What news would they learn now?

Flocks of birds rose in the sky, and someone shouted: "Earthquake!" We regrouped at the center of the open space, as a second powerful tremor shook the ground.

When everyone had been accounted for, I finally felt relief. One of our staff was blocked in Chautara by a huge landslide that had cut the main road, but he was safe.

Driving home at night, the streets that had come back to life over the past days were again deserted, the shops that had reopened were again shuttered. It was a bad night. There were three more powerful tremors. People were screaming, others were blowing whistles. My colleagues and I all have whistles, meant to attract the attention of rescuers if you are trapped under debris.

I lay awake, thinking of those living under tents, of colleagues taking their elderly parents to the relative safety of open spaces. Of those brave Nepalis who had already started rebuilding their destroyed houses, of the children who so badly needed to go back to school, to engage in any activity that would take their minds off the disaster.

The next day, all were back to work at the ICRC delegation, but many faces showed exhaustion. Everyone was affected by the stories of grief coming from newly hit areas. More deaths, more injuries, more houses crumbling like a pack of cards. What could we answer to anxious survivors who asked "what next", when not even geologists could predict when the aftershocks would be over?

Yet as I was poring over reports from the field and listening to colleagues, hope started creeping back. Nepal Red Cross Society (NRCS) teams were providing first aid services to the injured and continuing relief distributions. One hospital, in Dhulikhel, with which we had developed a partnership on the Emergency Room Trauma Course, was operating on patients airlifted from remote areas. Our Nepali psycho-social professionals and community based psychosocial workers, together with their NRCS colleagues, continued helping survivors cope with their uncertainty, fear and sadness. Others were striving to restore links between separated family members. The two physical rehabilitation facilities we have supported for years, in Kathmandu and Pokhara, were already treating patients from the earthquake.

Helping hands were at work everywhere.

Continuity. This was it, I thought. The ICRC has been in Nepal since 1998, responding to the needs arising from the internal conflict between the Maoists and the Government. For the last 16 years, we have contributed to strengthen the emergency preparedness capacity of the NRCS and of state institutions, give hope to separated families through Red Cross messages, provide comprehensive psycho-social support to family members of those missing in the conflict, train forensic specialists to identify dead bodies. Now, this longstanding collaboration was being put to work for the earthquake victims.

I deeply hope continuity will prevail. The famed Nepali resilience does not need be put to the test yet again.

Dragana Kojic is head of the ICRC's Nepal delegation.