Madagascar: A new leg for a new life 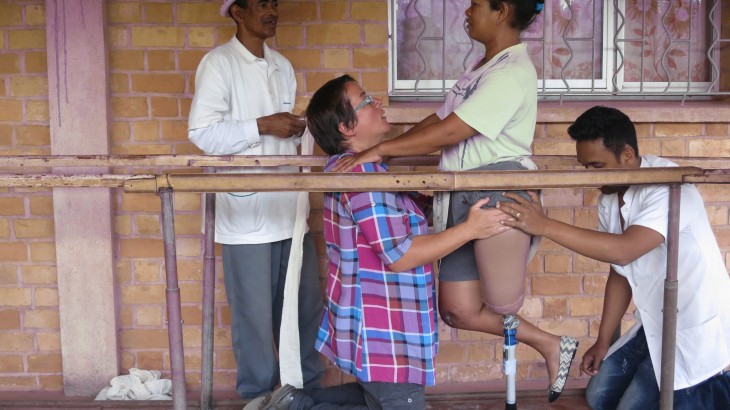 Elisabeth is looked after by physiotherapists and technicians at the Akanin'ny Marary centre in Madagascar, which is supported by the SFD. Photo Narindra Rakotonanahary/ICRC

On 25 January 2014, Madagascar celebrated the inauguration of its new president at the Mahamasina municipal stadium in Antananarivo. At 7 p.m. on that day, Elisabeth left her small shop in the neighbouring district of Anosy to go and buy fresh supplies with her sister. Suddenly, a bright light blinded her and an explosion blew off her left leg, propelling it several metres away from her.

Narindra Rakotonanahary, head of the communication department at the ICRC delegation in Antananarivo, tells us how this young Malagasy woman has been helped by the ICRC.

While she was still conscious, Elisabeth heard someone shout: "Help us, she's dead!" But she cannot remember now who brought her to hospital. It was only when she woke up the following day that she realized she had lost her left leg. On top of the already unbearable physical pain, she had to endure further anguish when her mother died just a few days after hearing the news.

After two months in hospital, Elisabeth received a first artificial limb, but was not really able to use it. The ICRC therefore offered to re-fit her, but for that she had to go to the Akanin'ny Marary ("Home for the Sick"), a centre supported by the ICRC Special Fund for the Disabled (SFD). Her younger sister, who has not left her side since the accident, went with her to the centre, which is a five-hour drive south of the capital. "My sister must always be nearby to help me. I hope that with the new prosthesis I can become more independent," the young woman confided. She is now already talking of going back to work by Christmas.

Teamwork at the centre

At the Akanin'ny Marary centre, Christian and Thierry, two prosthetic/orthotic technicians, set about making a new prosthesis for Elisabeth. Such work must be carried out with utmost precision and the prosthesis must be flawless. However, when Elisabeth tried her new limb, it still felt uncomfortable around the thigh. Solenne, a SFD physiotherapist visiting the centre, and Theo, her local counterpart, showed Elisabeth some exercises which would help her better distribute her weight on her leg and the prosthesis. Meanwhile, the physiotherapists and technicians identified the different points needing rectification during the re-casting and tightening-up processes. Solenne explained that this multidisciplinary approach is advocated by the SFD/ICRC: "A patient's success in learning to walk depends above all on two things: the quality of the device and the accompanying exercises." 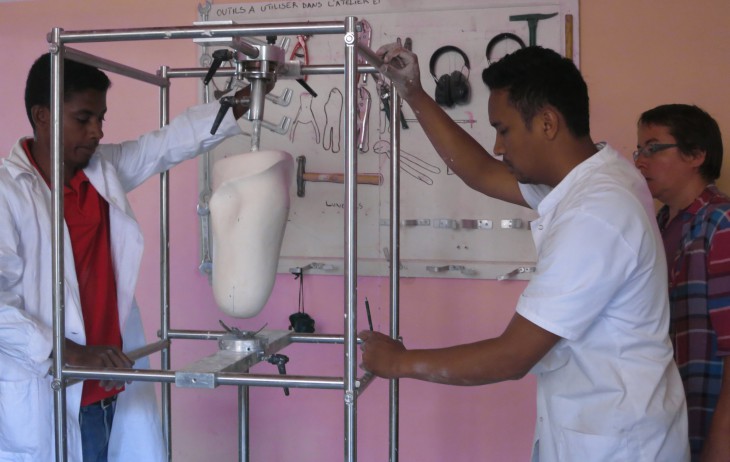 Thierry and Christian, two prosthetic/orthotic technicians, prepare the prosthesis under the watchful eye of Solenne, the SFD physiotherapist.

Elisabeth is not a very talkative person, but the energy with which she threw herself into the exercises spoke volumes about her will to adapt to her new situation and to get on with her life. Asked by Solenne what kind of shoes she planned to wear for every day, to determine what heel and how much flexibility to give to the prosthesis, Elisabeth opted for flat heels. "I want to wear pretty black ballet flats for church; for every day, flip-flops are perfect," she decided. The women helping her understood perfectly, and Solenne offered to go and buy her a pair of ballet flats.

At the end of the first day of exercises, the team concluded that some modifications were still needed. Under Solenne's watchful eye, a new prosthesis took shape. "Tomorrow she'll be walking!" exclaimed the physio confidently.

The next day, Elisabeth was all smiles: she was learning to walk with the new prosthesis which was now part of her body. "I no longer feel any discomfort or pain," she said. Solenne then asked her to repeat the exercises from the day before: "I press down on my heel, I put my weight on it and I push back – sing it like a refrain!" Elisabeth knew she had a big challenge ahead; she had to master distributing her weight and learn to walk again, but she trusted the team guiding her and had already found the inner strength to meet the challenge. The exercises took place in a light-hearted atmosphere and gradually she lost her fear of falling. By the end of the day, Elisabeth could already take some steps on her own with her new leg. The team shared her joy: "We hope that within two weeks she'll be walking by herself on her two legs," said Solenne. 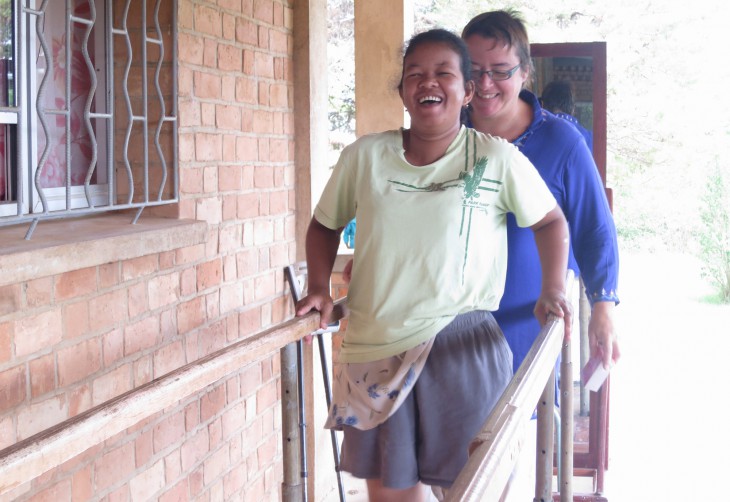 "Should I push you?" teases Solenne during an exercise on the bars, and Elisabeth bursts out laughing.

The Akanin'ny Marary centre was founded by Catholic missionaries in 1964. It treats four kinds of patient: people suffering from leprosy, tuberculosis, mental-health problems and physical and psychomotor disabilities (amputees, clubfoot, etc.). From January to October 2014, the centre's fitting and rehabilitation service cared for more than 200 patients. The majority of these were children with cerebral palsy (40%), clubfoot (40%) or paraplegia, but adults also came to see a specialist and be fitted. The service is staffed by a multidisciplinary team consisting of six technicians, one physiotherapist and three assistants, and two shoemakers. The centre receives training, visits, technical monitoring and material support from the SFD. 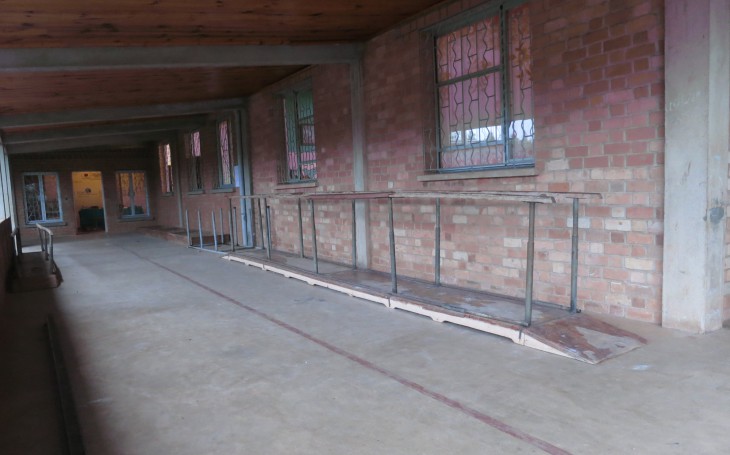 The centre's fitting and rehabilitation service is well-known and respected in Madagascar.

The SFD was established by the ICRC in 1983 to ensure the continuity of ICRC projects for people affected by armed conflict and other situations of violence and to support physical rehabilitation centres in low-income countries. In 2001, the SFD became an independent foundation under Swiss law. The SFD aims to improve the quality of life of people with disabilities. The SFD also seeks to strengthen the capacity of physical rehabilitation structures and ensure the sustainability of their services.