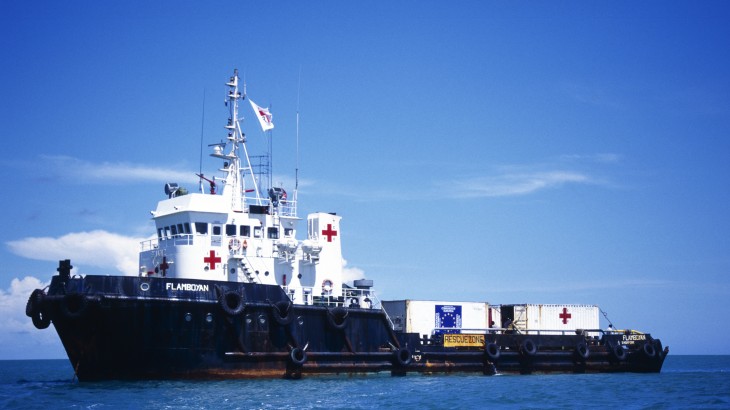 Experts from 21 countries deliberated upon operational aspects of the law of naval warfare and current issues relating to humanitarian action at sea during a regional workshop in Kuala Lumpur.

Jointly hosted by the Royal Malaysian Navy (RMN), National Defence University of Malaysia (NDUM) and the ICRC, the regional workshop on the law of armed conflict (LoAC) at sea was held from 15 to 19 May, 2017 in Kuala Lumpur. Spread over five days, the workshop was attended by 28 senior naval officers, seven military experts and academia from 21 participating countries.

The annual workshop is highly relevant as there is an increased emphasis on naval power in Asia Pacific region. Kirby Abbott, the course director and also the ICRC Armed Forces Delegate for South East Asia and the Pacific, said the region is expected to have more than half of the world's submarines operating here by the year 2035. As a neutral intermediary, which shares this operational space and is considered to be the reference point for international humanitarian law (IHL) or LoAC, the ICRC is uniquely positioned to create a platform where senior naval operators, most with command experience, could enhance their understanding of LoAC at sea and exchange ideas.

Abbot shared that the workshop achieved a high level of discussion in a non-political way, thus reflecting the platform's neutral character. "Year after year, participants consistently tell us how much they appreciate the focus on application of IHL principles in a maritime context. Most of the traditional military IHL training is often land-centric," Abbot said. Commander Brock Symmons from New Zealand highlighted that the workshop which has a focus on naval operations in a peer environment of operations and warfare officers was extremely valuable.

Representing RMN, which co-organised the workshop, Captain Sazalee bin Shoib emphasized that with maritime security currently being dynamic and asymmetric, it was essential for naval officers and maritime enforcement agency to understand the issues related to LoAC at sea to avoid misjudgment during operations.

Echoing these thoughts, both Commander Khairil Haji Abdul Rahman from Brunei and Commander Kumara Jayalath of Sri Lanka said the knowledge that they gained from this workshop would help them to take the correct decision and also exercise proper command and control over maritime operations at sea.

Participants also said that the sharing and exchange of ideas between experts during group activity was the high point of the workshop.

Captain Md Ehsanullah Khan from Bangladesh and Lieutenant Colonel Ton Duc Anh from Vietnam said they enjoyed the group exercise on drafting naval rules of engagement in armed conflict as it assimilated the expertise and experiences of naval commanders from different parts of the world.

"Having subject matter experts as directing staff in this workshop also made it easier for participants to grasp the concepts delivered on LoAC at sea," said Commander Jack Willie Galia from Papua New Guinea. Full of praise for the lectures, Commander Lee Jae Hun of Republic of Korea said the expert forum had led to an exchange of ideas, particularly on the law of naval warfare, operations in details and maritime targeting.

A participant from Philippines, Lieutenant Commander Edison G Laroco, added that the workshop gave participants a better understanding regarding reasonable use of force between belligerents with due regard to the treaties, conventions and other laws related to armed conflict at sea.

Summing up aptly, Commander Mathew Hall from the United States said the workshop provided all participants with "the opportunity to meet and engage with regional maritime professionals who, regardless of rank or nationality, all share the common bond of the sea!"