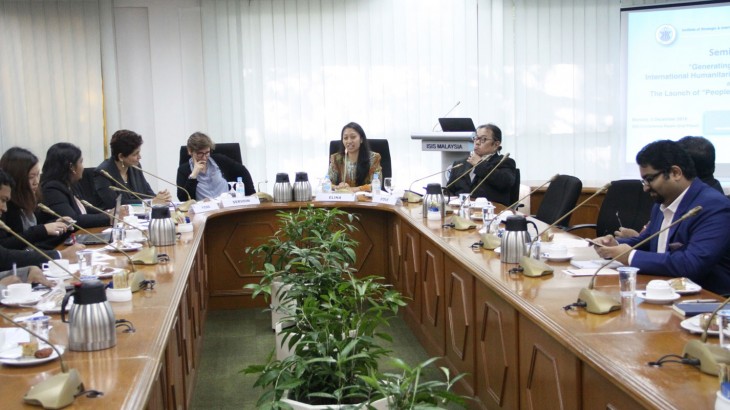 Some 30 participants gathered for a half day roundtable session to discuss way forward in generating greater respect for the IHL. © Jesri Hambali/ISIS Malaysia

In conjunction with the launch of the "People on War" survey, ICRC co-organised a seminar on "Generating Respect for International Humanitarian Law in Today's World" with the Institute of Strategic and International Studies (ISIS), a renowned think-tank in Malaysia. There were some 30 participants from government agencies, academia, think-tanks and humanitarian organisations.

Claire Servoin, Deputy Head of ICRC Regional Delegation in Kuala Lumpur, talked about the survey, explaining a little about the background and how it was pertinent in a world where we see serious violations of IHL and as a result, many dire humanitarian consequences. "Majority of respondents in the survey still believe that the rules of war matter, which is reassuring for us," she said. Even so, the fact that the survey showed increased tolerance of torture and civilian casualties is worrying. "We need to reinforce basic elements of humanity that the IHL upholds and protects and the importance of ensuring that these principles are respected", said Servoin. 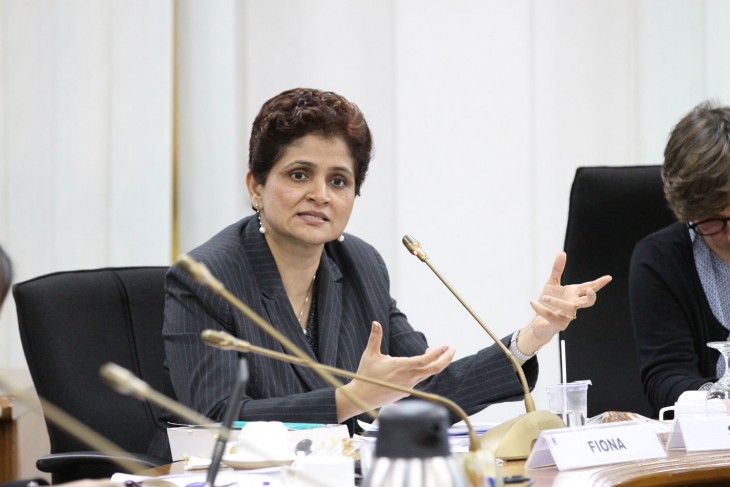 Fiona Barnaby, Legal Advisor, ICRC Kuala Lumpur, said that the survey is a tool for ICRC to engage with the public as well as policy makers to generate and ensure respect of IHL. She referred to an internal ICRC study concluded in 2010 on Strengthening Legal Protection for Victims of Armed Conflict. The study showed that IHL offers, on the whole, an appropriate framework for regulating the behaviour of parties to armed conflicts. However, it is important to have greater compliance with existing rules to make the IHL effective. More than ever, States need to come together to discuss a way forward. Despite the states not being able to agree to a compliance mechanism during the International Conference in 2015, ICRC continues to dialogue with State parties on an agreeable way forward to ensure respect of IHL

Participants were engaged and interested, resulting in animated discussions. Several interesting points of consideration were brought up by the participants. Participants discussed the challenges of applying IHL in complex situations involving non-state actors which acted as quasi-states, as well as the reality of the politics at play when it comes to the formation and enforcement of law. Some participants were interested to know about the tangible success of IHL implementation in the last decade, such as the Arms Trade Treaty, and how the survey findings can be used to influence policy-making. While some mooted the idea of "naming and shaming" the violators of IHL, one participant who has worked closely with the ICRC in the field spoke of the importance of ICRC's neutral position in an armed conflict. Participants were also interested to know ICRC's outlook for the future, and how IHL can be applied when dealing with new weapons and new technology.

Elina Noor, the Director of Foreign Policy and Security Studies, ISIS Malaysia said that the International Humanitarian Law offers a glimmer of hope in the dire situations of war and conflicts. "Today we see conflicts situations becoming increasingly complex, not only in the Middle East but also closer to home," she said. Echoing ICRC's invitation for inputs, she said that it is important for various stakeholders to work with ICRC to contextualize the use of the law in the region.

In closing, ICRC speakers stressed the importance for ICRC to continue engaging all parties and come up with innovative ways to sensitize the public on IHL and humanitarian principles. More so, governments and people must take ownership of IHL implementation to safeguard humanity in war. One of the ways to do this is to put in place domestic legislation that can effectively prosecute war crimes, instead of relying on international mechanisms such as the International Criminal Court. At the end of the seminar, participants were welcomed to brainstorm with the ICRC on ideas and mechanisms for better compliance with IHL in the Asia-Pacific region.