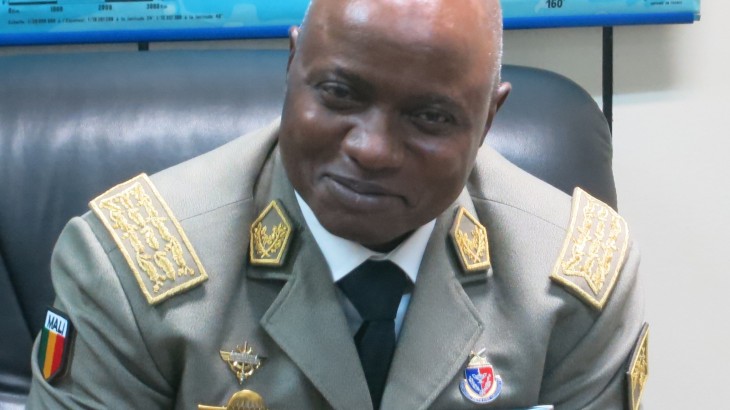 General Mahamane Touré, Chief of the General Staff of the Malian armed forces

"The Malian army is present in large areas of the country from which both the State and justice are often absent. In a sense, therefore, we represent the Malian State, and the Malian State has to be seen, perceived and understood as just, and as the protector of its citizens. It is therefore very important that members of the armed forces promote law and justice, wherever they may be."

Would you say that IHL is well known and respected by the Malian armed forces?

IHL is taught at all our military training establishments. Awareness-raising activities are carried out as part of all training courses, and in the field. But it will take time before everyone internalizes IHL and makes it part of their habits.

The "Kouroukan Fouka" charter, which predates the Universal Declaration of Human Rights, shows that respect for the citizen, for the law and for order are deeply-rooted in our history. Today, we have to show that we are true to our history.

Strict compliance with IHL by all of our personnel is still an objective to be attained, but I am convinced that the majority of personnel have understood the importance of IHL and endeavour to apply it. What is very important is that military personnel respect the rights of the citizen and that the citizen respects military personnel and can live alongside them in complete confidence. Only if this is the case can our soldiers do their job. We therefore have to earn this confidence.

What about the responsibilities of commanders?

The commander's first responsibility is to select the right personnel and to ensure that they are properly supervised and trained. This requires leaders of quality, who are competent and aware of the responsibility they bear for the young soldiers under their command.

It is also the commander's responsibility to take disciplinary action when the law is not obeyed. We are currently building an army in which commanders are aware of their responsibilities.

Do you have internal disciplinary measures in place to deal with breaches of IHL?

We certainly do! These measures are mentioned in the Constitution and in army regulations. To take one example, Art. 3 of the Malian Constitution states that "any individual, any State official guilty [...] of ill-treatment, abuse or inhuman, cruel, degrading or humiliating treatment, be it on his own initiative or in response to an order, shall be punished in accordance with the law."

We have also set up a mechanism for all military units in the field, consisting of independent provost staff authorized to assess the actions of personnel and report back to their chain of command, or to the ministry of defence. Their reports are automatically passed on to the judicial authorities. In addition, we have an effective Judge Advocate-General's Department, with its own court.

So we have a whole range of disciplinary measures available, and they apply to all.

What is your opinion of the support that the ICRC provides to the Malian armed forces?

The ICRC's support enables us to be sure that we are operating in accordance with the law. It also enables us to correct any deficiencies in this respect. By enabling our commanders to attend courses, the ICRC gives us an opportunity to meet others, to learn from their experiences and to develop.

The close support that the ICRC provides through its regular contact with our personnel in the field, training them and reminding them of their responsibilities towards the population, is very important. The same is true of the basic IHL manual on which we have been working together for a number of months. This will give us a teaching aid specific to the Malian army that will take account of our particular circumstances. It will be issued to all unit commanders.

I would also like to mention your visits to prisoners, in particular to prisoners of war, to listen to them. to support them and to pass on messages from their family, all of which you do very discreetly. And then of course there's the confidentiality that you observe with regard to certain subjects.

How useful are the tools developed in conjunction with the ICRC?

These training aids are excellent. The little IHL handbook for soldiers, which is simple and well-illustrated, is particularly effective. As is often said, a picture is worth a thousand words. I appreciate the effort that has been made to simplify the messages, so that they enter a soldier's subconscious and ensure that he reacts correctly.

If you had to say just a couple of words about IHL to your men, what would they be?

I would like to remind all members of the Malian armed forces that their first duty is that of self-respect. The first rule is to know who we are, what values we project and, above all, that we are Malians. International humanitarian law sets out a certain number of rules that are reflected in our doctrine, in the Malian Constitution and in the rules and regulations of the army. All of these instruments are based on the principle of respect for our fellow-citizens.

I am counting on each and every one of you to respect these rules, as you represent the State wherever you may be, because they form the foundation of our society and of our armed forces. It is in accordance with these rules that we will be judged.