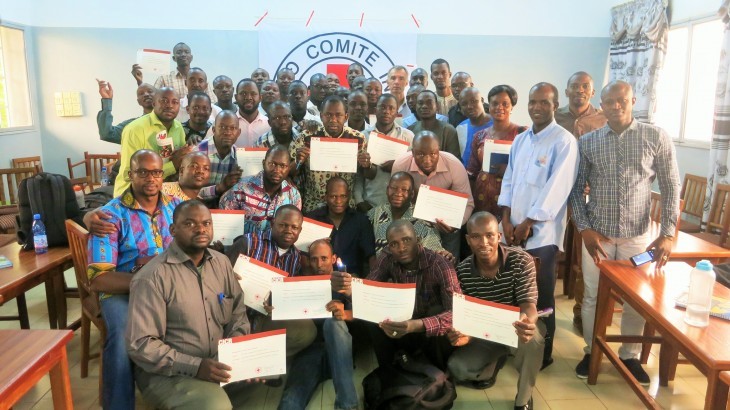 Group picture at the end of the training, CC BY-NC/ ICRC / Mohamed Cissé

War surgery consists of treating victims of armed conflicts and violence who were injured by weapons. From 10 to 23 May 2017, 50 medical doctors, who were undergoing specialized surgical training, attended a war surgery course at the Faculty of Medicine, Pharmacy and Odontostomatology, in the University of Bamako.

Organized within the partnership framework between the ICRC and the African and Malagasy Council for Higher Education (CAMES), the workshop aimed to train participants in treating wounded parties in armed conflicts (injured by guns, knives/bayonets, explosives, etc.).

For six days, an ICRC expert-surgeon trained the participants in the main aspects of war surgery. These included injuries that affect limbs, abdomen, chest, head, wounds from landmines or blasts, management of massive influx of wounded people, first aid, etc.

In northern regions and large part of Mali's center, the civilian population continues to suffer due to armed conflict and violence leading to a significant number of injuries by weapons, bayonets, explosives, etc. The physicians, who participated in the workshop, will now be able to treat the wounded in a timely manner.

Dr Naouma Cissé, a participant, said: "Our country is experiencing conflict situations. We are dealing increasingly with these kind of injuries, including here, in Bamako. This training helped us to deepen our knowledge in surgical treatment of various injuries related to armed conflicts, a little-known field in Mali."

In Mali, we are supporting several health care centres in the north of the country such as Gao regional hospital since May 2012. In addition to our support in terms of human, physical resources, equipment and rehabilitation of infrastructures, we ensure the treatment of war-wounded and all vulnerable patients.

From January to May 2017, our medico-surgical team together with the hospital's staff, have carried out over 690 surgical operations and performed surgeries on more than 135 war-wounded.

It must be emphasised that an ICRC's surgical team may also be deployed in Mopti and Segou regions to provide support to hospital facilities.