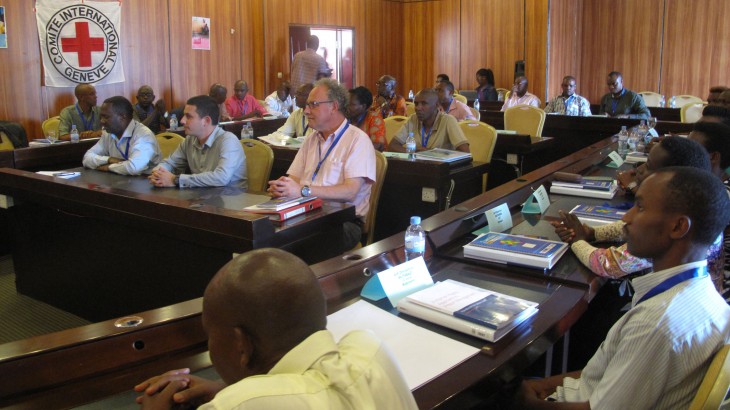 Correctional officers listen to a speaker during a five-day training aimed at improving the welfare of Rwandese detainees. CC BY-NC-ND / ICRC

A group of 24 Rwandan correctional officers from around the country concluded a five-day training aimed at strengthening their capacity to meet national and international standards in detention for the improved welfare of Rwandese detainees.

This course was designed by the International Committee of the Red Cross (ICRC) in close collaboration with the International Centre for Prison studies (ICPS), which is now merged with the Institute for Criminal Policy Research of Birbeck University based in London. It was brought to Rwanda by the ICRC in collaboration with the Rwanda Correctional Service (RCS), the prison management authority in Rwanda to uplift its staff's professional skills.

During the five-day period, participants discussed, shared their knowledge and experiences on various issues, especially on how to identify detainees' needs and face humanitarian challenges in detention, how to develop a new understanding, to plan for action and to make change happen. 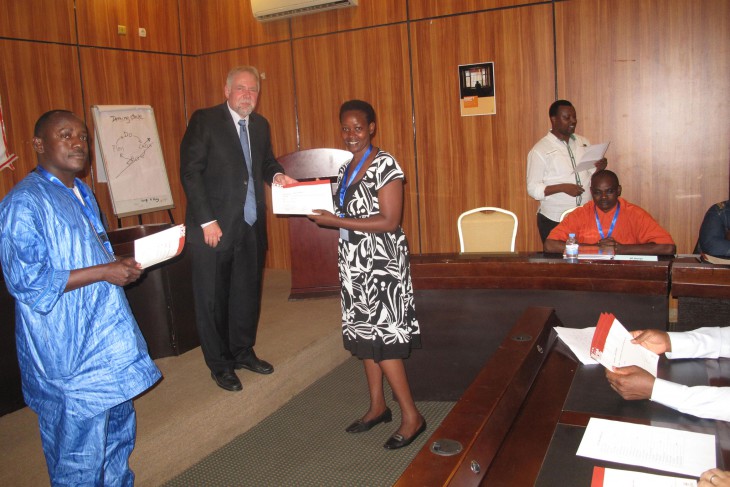 The Head of the ICRC Delegation in Kigali, Pascal Cuttat, hands over certificates to participants at the training. CC BY-NC-ND / ICRC

ACP Jean Bosco Kabanda, one the participants said that the training is of the great importance as it provided them with the skills to deal with the problems that they have been encountering in the execution of their daily duties. "We have identified most of the problems we have been facing and now we know how to address them thanks to the creative problem solving approach that we learned. I am sure that positive changes will be seen soon on the ground," ACP Kabanda told us.

The course is the first of its kind to be conducted in Rwanda. Since its inception, five Rwandese prison management officers have attended it in Geneva, which makes now a total number of 29 officers well trained.

Explaining why this course was brought to Rwanda, the Head of ICRC Delegation in Kigali, Pascal Cuttat says "prisons or correctional centers are built to keep human beings and their management should be done in a creative manner. The ultimate goal is to make sure that a maximum number of RCS staff are trained for the better wellbeing of detainees". Mr Cuttat adds that this first course will serve as a pilot and in the future the intention is to gradually handover its organization to the RCS, which will continue to receive ICRC support.

The Commissioner General of RCS, CGP George Rwigamba appreciated the ICRC's collaboration to facilitate the capacity building of prison officers. Speaking at the closing of the course, CGP Rwigamba said "The knowledge and skills gained here will certainly reflect the great impact in our prison management. Hearing from the participants, I can already smell the change."

The commandant of the RCS Training School, who attended personally the course, expressed an interest in adapting its elements to enhance existing courses or to use it as standalone modules as the RCS further develops their training offer. 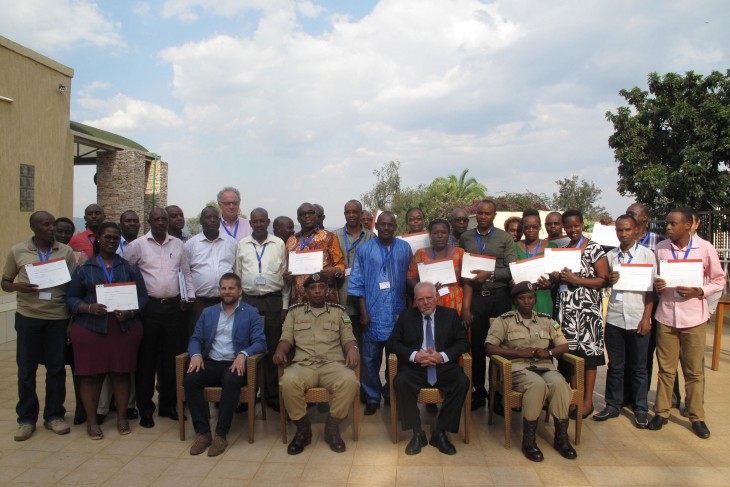 At the end of the training course, the participants posed for a group photo. CC BY-NC-ND / ICRC

Since the ICRC established its delegation in Kigali in 1990, it has been working closely with the government of Rwanda to ensure the respect of detainees' wellbeing. In addition to regular monitoring and dialogue, various projects have been jointly implemented, including innovations such as biogas systems in prison, soap and chlorine production and sauce pan production. Various water, sanitation and hygiene-related initiatives have also been undertaken, including the capture of nearby water sources.

An ongoing pilot project aimed at improving health care in detention is jointly run in Huye and Ngoma prisons to ensure that every detainee has access to primary health care.