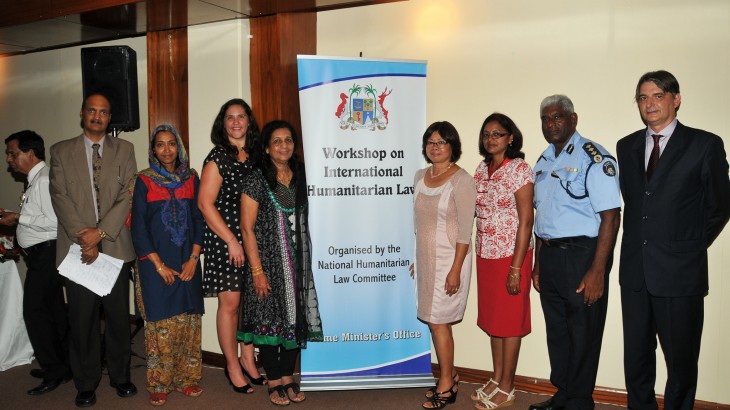 The chairperson of the IHL workshop, members of the Mauritius National IHL Committee and representatives of the ICRC. © Mauritius Red Cross

International humanitarian law (IHL) is relevant not only to nations suffering conflict, but also to peaceful states. Mauritius and Seychelles are two countries that clearly demonstrate this.

While neither of these island states is likely to experience the consequences of armed conflict, both have displayed their support for IHL by ratifying and domesticating a number of IHL instruments. In addition, both countries have established well-functioning and effective national inter-ministerial committees that meet regularly to discuss and advance the implementation of IHL.

In November 2014, the ICRC's regional delegation for the Indian Ocean was invited to meet with both committees in their respective countries to provide IHL updates and training on their chosen issues of interest.

Promotion of the Arms Trade Treaty

Adopted in July 2013, the Arms Trade Treaty formally entered into force on 24 December 2014, bringing its relevance to the fore. Upon the request of the Seychelles government, the ICRC facilitated a half-day workshop with the Seychelles Humanitarian Affairs Committee on the relevance and implementation of the treaty.

In his opening speech, Christoph Vogt, head of the ICRC's regional delegation for the Indian Ocean, noted that the workshop was a good reminder that countries like the Seychelles can contribute to the limitation and reduction of suffering in the world by actively participating in international forums and debates around the development of IHL.

Referring to piracy, the Principal Secretary of the Ministry of Foreign Affairs, Mr Maurice Lousatu-Lalanne, reminded the audience that the Seychelles had experienced first-hand the effects of arms in the wrong hands. He confirmed that the Seychelles have always been, and will continue to be, a determined and vocal supporter of the principles and objectives of this important treaty.

Contribution of island states to the promotion of IHL

The ICRC also participated in a half-day workshop on IHL in Mauritius. The workshop, organized by the Mauritius National Humanitarian Law Committee, brought together over 70 stakeholders from the police, prisons, government, education and youth officers to discuss the importance of IHL and its relevance to the island state. Discussions included new weapons and their relevance to Africa, as well as methodologies for sensitizing various audiences to the relevance of IHL.

The Senior Chief Executive of the Prime Minister's Office, Mrs KO Fong Weng-Poorun, opened the workshop by noting that Mauritius does its utmost to comply as far as possible with IHL obligations, and that the country seeks "to ensure that the present generations and those to come do not get entangled in the spiral of conflicts, hatred and destruction but concentrate on the notion of nationhood, development actions, citizenship and civic education."

Christoph Vogt, once again in attendance for the ICRC, underlined that Mauritius has an excellent IHL record and that its National IHL Committee is to be commended for its seriousness and efficiency.

He also praised the IHL photo exhibition that the committee has put together of its own initiative and which exists as an important reminder of the horrors of war and of the continued relevance of IHL for the world. The exhibition was launched in August 2014 and has since been roving around the country with the aim of drawing attention to the importance of IHL. 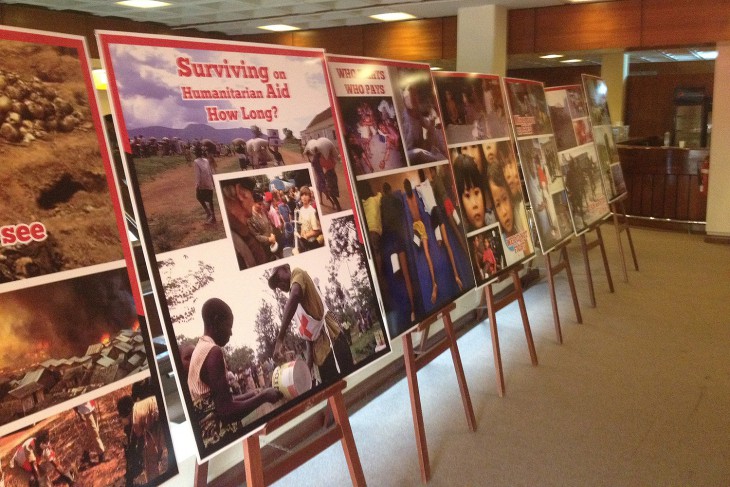 View of the IHL exhibit put together by the Mauritian IHL Committee. © Mauritius Red Cross

International humanitarian law progresses when like-minded states stand together to support its promotion and development. Despite their peaceful nature, Seychelles and Mauritius have demonstrated that they are two countries committed to its continued advancement.