An ICRC report published in Dec 2017 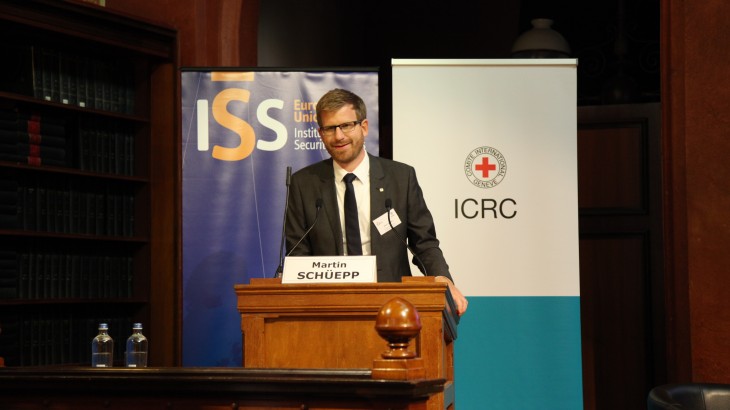 Conference jointly organised by the International Committee of the Red Cross and the European Union Institute for Security Studies in Brussels, on 22nd September 2016

Migration is a global phenomenon. Worldwide, the number of migrants continues to grow rapidly, reaching 244 million in 2015 according to United Nations (UN) figures. In Europe, over a million migrants arrived in 2015, a trend which is only set to continue. Migration can be voluntary or involuntary, but most people act on a combination of choices and threats. These threats include widespread persecution, armed conflict, and other situations of violence, insecurity and poverty.
Regardless of the reasons for migrating, people can become vulnerable at many stages of their journey as they travel from their home countries, often through numerous other countries. Migrants transit through areas of armed conflict or other situations of violence. Many get stranded. And all along their route, they make easy targets for abuse and exploitation, while facing countless other risks. Even those migrants arriving safely in countries of destination, endure great hardship during their journey that can affect their physical integrity and mental health. Every year, thousands of migrants disappear or die along the way.

Migrants who have left or fled their homes are frequently viewed in terms of sheer numbers and a potential source of insecurity. Yet, the securitisation of borders, criminalisation of migration, resort to detention as a deterrence measure, do not prevent people from starting a journey, creating greater hardship and suffering. As conflicts rage and secure channels to reach safe ground become scarcer, migrants will continue to turn to the few options they are afforded – however risky these may be. The risks people are ready to take are somehow proportional to the threats they are fleeing. This conference, coming in the wake of the UN Summit on Refugees and Migrants, and days ahead of the planned meeting of the European Union Justice and Home Affairs Council, explores issues related to vulnerability and protection of migrants, as well as security concerns. Dealing with this issue from different institutional perspectives, the International Committee of the Red Cross (ICRC) and the EU Institute for Security Studies (EUISS) aim at providing new spurs to this important debate.