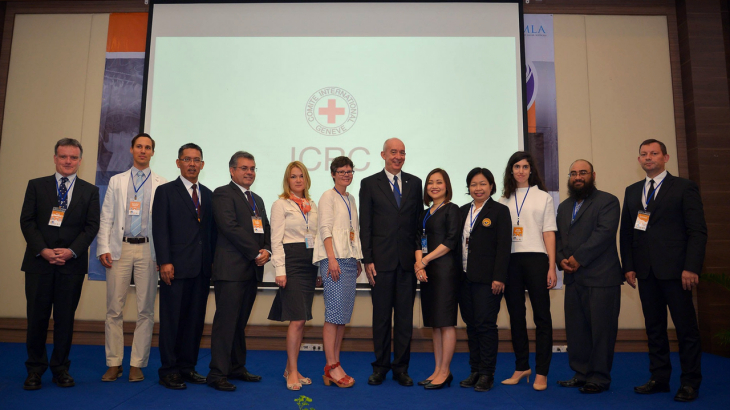 The ICRC hosted a full-day workshop on humanitarian forensic work during the annual conference of the Asia-Pacific Medico Legal Agencies' Association (APMLA). The conference was hosted by the Central Institute of Forensic Science, which comes under the Thai Ministry of Justice, and held from 17 to 19 July 2017, in Chonburi province, Thailand. Over 180 forensic science specialists who deal with humanitarian issues gathered from 17 countries in the Asia-Pacific for the conference.

Over the past two years, the global migration crises has reportedly claimed close to 5,500 lives. Along the Mediterranean route, approximately 4,000 migrants have lost their lives, while almost 800 have died in Southeast Asia. Besides the human toll, there is also the issue of people who go missing while migrating from one country to the other. The key challenge in identifying missing migrants has been lack of communication and information-sharing among related agencies. To address this issue, this year's conference organized by the Asia Pacific Medico Legal Agencies' Association hosted representatives from the forensic community across the Asia Pacific region. Experts gathered during the three-day conference to renew contact and discuss problems of mutual interest, aiming to bridge gaps in communication. This year, the ICRC played a crucial role in co-organizing a full-day workshop during the event, in collaboration with the Thai Central Institute of Forensic Science.

The increasing prevalence of migrants either disappearing or dying has pushed several government and non-government agencies to develop specific programmes to effectively identify dead migrants through the application of forensic science. International police agencies such as Interpol have established Disaster Victim Identification (DVI) teams, while international humanitarian organizations like the ICRC have been working on programmes like the Restoring Family Links (RFL) to reunite those who are missing, with their loved ones.

To improve the current methods of working, new forensic technologies are being constantly developed, led by experts such as the Victorian Institute of Forensic Management in Australia. The institute has been studying the use of radiology and molecular biology to identify decomposed and burnt remains from the bladder and toenails.

Despite positive progress, there is a lack of coordination and integration among partners that remains a big challenge. This gap has resulted in unconsolidated figures and also very few successful cases of identification of dead bodies.

According to the Australian Red Cross (ARC), this lack of collaboration between authorities has meant that out of the 626 cases of missing migrants being handled by the organization, as many as 538 cases remain unsolved. "Our success rate of resolving missing migrant cases is more than 80%. But for deceased migrants, the successful cases are only a handful," stated Megan Goodwin, an Australian Red Cross representative.

Another parallel issue raised during the workshop was the different policies on information sharing of each organization. While Interpol has confirmed its willingness to help bridge the gap between the two main sources of identification data, i.e., local police authorities and humanitarian organizations like the ICRC or the International Organisation for Migration (IOM), some challenges still remain. For Interpol, information should be collected by the police who are trained in the task, rather than the common man, in order to safeguard the data. For the ICRC, it is important that information is collected for the purposes of investigating the fate and whereabouts of the missing. However, this should be done with the consent of the family. The only exception to this rule is if there is a substantial public interest in the case, or for the vital interests of the person concerned.

Most of the participants emphasized that dead bodies must be managed with respect and dignity at all times, taking into account the right of families to know the fate of their missing relatives, and the right to receive the remains of their relatives – the principles that are enshrined in international humanitarian law (IHL) and international human rights law (IHRL).

Experts felt that only a spirit of true cooperation between different agencies would help achieve these goals and minimize the suffering of the families of deceased migrants that go missing in the region.