Momba and his family of eight were forced to flee from their home in Macomia district in July 2020, Mozambique to Pemba and finally Metuge district with nothing. But they still consider themselves lucky. Because all the family members were safe from the violence in Cabo Delgado.

"While we were on the run, we stayed in the bush for three days. We would eat cassava and risk our lives looking for drinking water in nearby rivers," says Momba.

Momba's experience is the reality for many of those who are affected by the violence in Cabo Delgado. Although most of these individuals have a designated place to resettle, there are still many difficulties ahead, as they arrive with nothing to restart their lives.

"When we got to the resettlement site, we lived under a cashew tree because we had no home. Then, a resident invited me and my whole family to stay on their porch while I chopped wood to make my own house," explains Momba.

Kits for starting over

To help these families get back on their feet, the International Committee of the Red Cross (ICRC) recently provided essential household items for more than 9000 displaced people in Metuge district. These items include tarpaulins, blankets, mats, mosquito nets, buckets, kitchen sets and soap. It will take much more, however, for these men, women, children and elderly people to go back to the lives they knew before.

Thanks to the items he received, Momba will be able put up a roof for the temporary house he built., and this will keep his family protected from the rain and help improve the living conditions.

"The other items will also definitely come in handy, as I was sleeping on the floor with my 10- and 7-year-old children without even a mosquito net."

Difficult to make a living

Even after receiving the basic cooking and shelter kits, displaced families still require further support, as they do not have jobs or any other source of income to make a living in the places where they have resettled. When Momba had just arrived in the city of Pemba, he would do small jobs such as transporting sand for sale. He would then use the money he made to support his family. However, given how difficult it was to make a living in the city, he preferred to resettle in the Metuge camp, where he was provided with a place to cultivate the land to continue supporting his family.

Before fleeing the armed conflict in his hometown, Momba lived a farmer's life, which provided food and income to support his family.

"I was able to grow beans, corn and peanuts in this new and small field, but for now they will only be for family consumption, because if we sell anything, there won't be enough for us."

Despite everything he has overcome in his day-to-day life, Momba still talks about the difficulties in accessing water and medicines.

"I still struggle a lot, because I'd like to live a normal life like the others — to have my own income and be able to buy something for my wife and children."

In addition to distributing essential household items, the ICRC has assisted 5,625 of displaced people in Metuge through its cash transfer programme, which enables them to cover their basic needs and as well start small businesses. To support the livelihood means, the ICRC also provides agricultural inputs and fishing kits. Furthermore, in order to improve access to health care and clean water, the ICRC has renovated and expanded health centres, pumps, wells and the water distribution network. 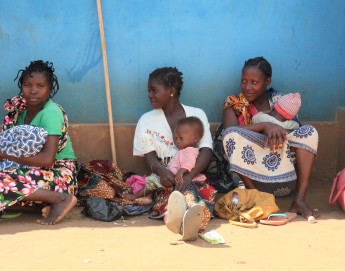 Mozambique: improving access to housing and health for displaced people 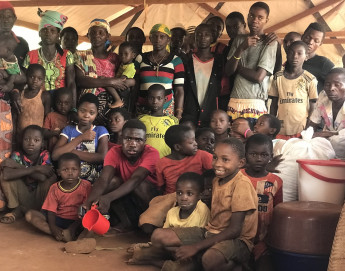