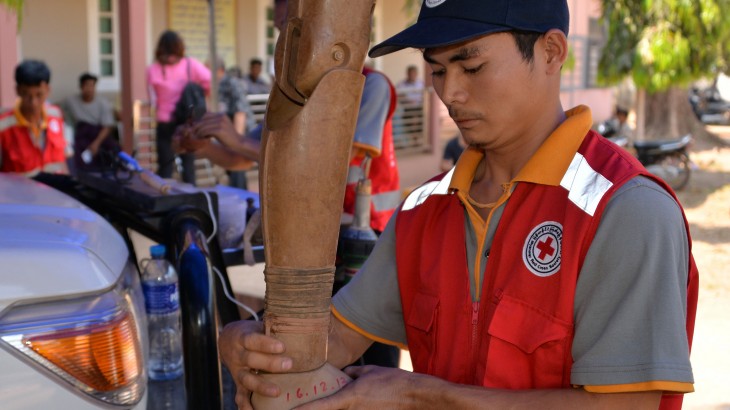 It's been months since U Maung Haw lost the foot of his prosthetic leg. A guard in a remote rubber plantation, U Maung Haw couldn't get leave approved to travel to the Hpa-An Orthopaedic Rehabilitation Centre (HORC) – run by the Myanmar Red Cross Society – where he could receive a new prosthesis. But when he heard that the centre's mobile repair team would be visiting nearby Kyaik Hto, he drove for four hours by motorbike in the hope of getting assistance.

When the HORC team arrived early in morning to set up the mobile workshop in Kyaik Hto, U Maung Haw was already waiting on the veranda of the local hospital along with 40 other people with artificial limbs. Working at a fast pace, the team set up the mobile workshop by their vehicle: bench, generator, tools, bags with supplies and a large portable shelter to provide shade from the sun. Three HORC staff – a physiotherapist, an ortho-prosthetist and a field officer – worked with each of the patients to review their needs and provide instructions for the required repairs. That day, U Maung Haw received a newly fitted foot and with this, an increased level of mobility.

But U Maung Haw's story is not unique. Since the HORC opened in 2002, the centre has assisted more than 6,000 people with artificial limbs, of which the majority have had difficulty finding the time to reach Hpa-An. This is not surprising as the centre covers an area of south eastern Myanmar that is more than 1,300 km in length. So when prostheses deteriorate due to wear and tear, these individuals simply manage the best way they can, even if their mobility is reduced. In 2014, a mobile repair workshop was set up with support from the International Committee of the Red Cross (ICRC). This service now reaches thousands of people like U Maung Haw, closer to their homes.

The ongoing toll of landmines

U Maung Haw lost his leg after stepping on a landmine in 1980 when he was a soldier. It's estimated that Myanmar's landmine accident rates are amongst the highest in the world, a consequence of weapon contamination from previous wars and decades of fighting in the country's eastern border regions between the Myanmar Army and armed groups. Similar to many countries worldwide, the majority of landmine victims are civilians. The country's current capacity for orthopaedic rehabilitation services cannot cover all the needs.

One of the civilian victims of landmines is Khin San Yi. She was 14 years old when she lost her leg in a landmine accident as she was on her way to visit a friend. Since receiving a prosthetic leg, Khin San Yi has married, had a child and now sells bamboo in her village. She also travelled two hours by motorbike to reach the mobile repair team, so she could have adjustments to her prosthetic leg. 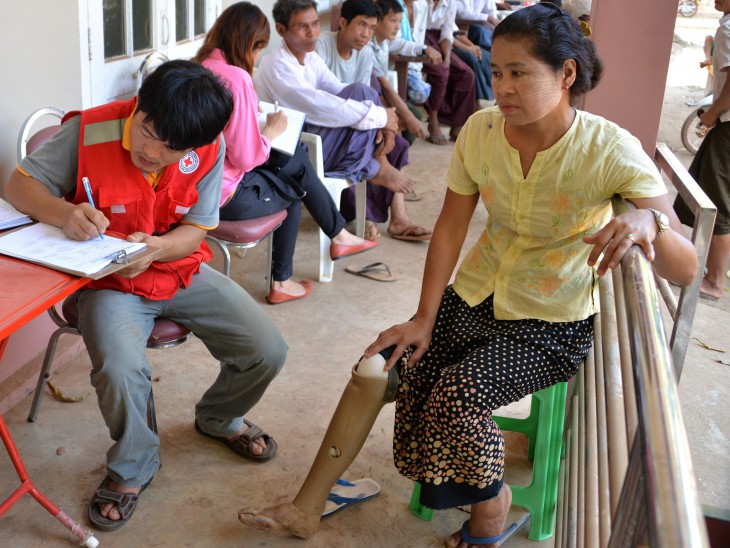 "Apart from providing repair services closer to home, the mobile repair team has other advantages," says the ICRC's physical rehabilitation program manager in Myanmar, Didier Reck. "Given the high demand for the services of the Hpa-An Orthopaedic Rehabilitation Centre, the mobile team can deal with routine repairs while the centre can concentrate on the process of fitting new prostheses, which can take up to a month per patient, including physiotherapy. The mobile repair team was organized following the example of a similar project in Cambodia, also supported by the ICRC," he concludes.

In 2014, physical rehabilitation programs supported by the ICRC in Myanmar assisted 3,251 disabled people, improving their mobility and producing 3,737 prosthetic limbs. Landmine victims received more than 50 per cent of the prostheses delivered. Since the start of activities in July 2014, the Myanmar Red Cross Society mobile workshop has offered foot and strap repair services to 1,046 patients who were unable to travel to the Hpa-An centre.