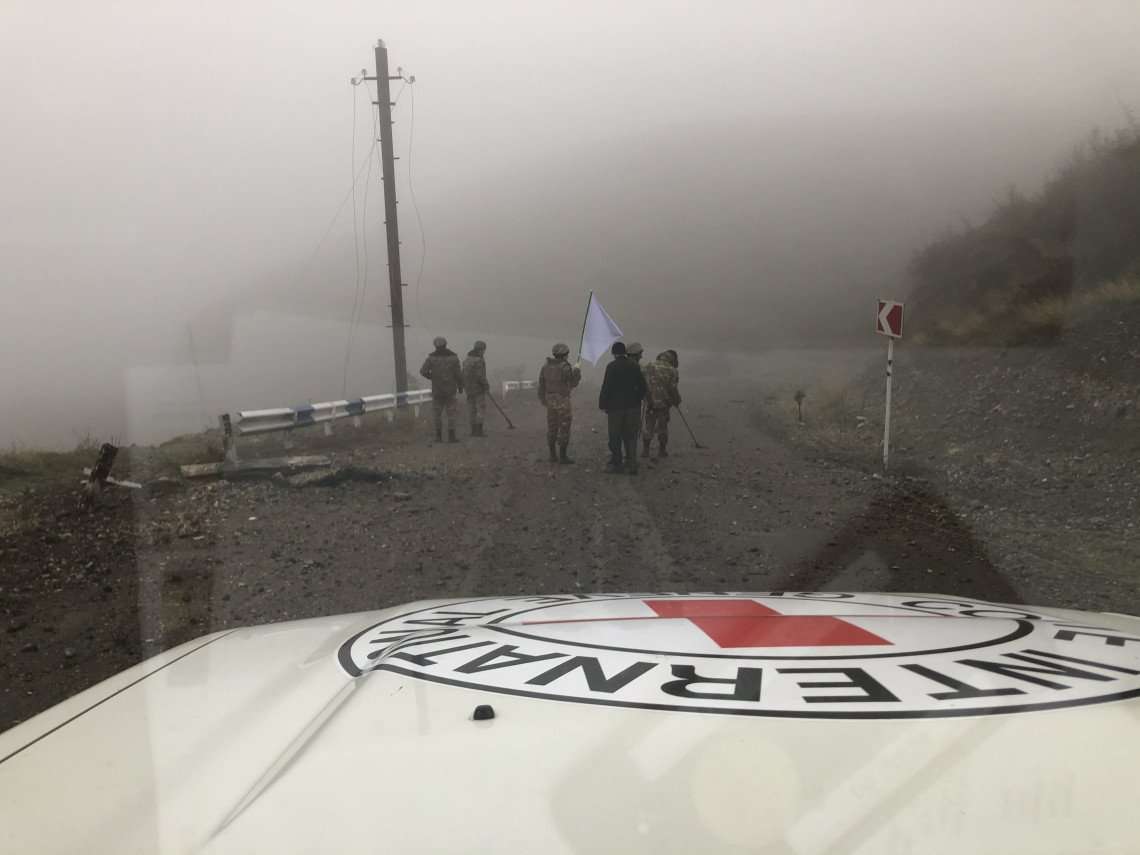 
In muddy fields and mountainsides, in hard-to-reach and remote areas, in scrubby terrain littered with mines and unexploded ordnances, dozens of men and women have spent more than a year searching for and retrieving the remains of fallen soldiers.
There are approximately 300 people still missing from the Nagorno-Karabakh conflict escalation in 2020. Since a ceasefire agreement was signed in November 2020, the remains of more than 1,700 people have been found and the process started to identify and return them to their families.

The International Committee of the Red Cross, together with Russian peacekeepers, has facilitated around 360 operations to find human remains, supporting local recovery teams as they work.

"Nothing can bring their loved ones back but giving these hundreds of families a chance to know what happened is incredibly important. Conditions are always extremely dangerous because the terrain is littered with mines and unexploded ordnances, and on top of that, in winter visibility drops to almost zero," said Christopher Poole, who leads ICRC's regional specialists in landmines, explosive remnants of war, stockpiles and small arms.

"In order to retrieve these remains, recovery teams must face mortal danger. It is not just about treating the dead with dignity, but also doing it safely. Our teams support local specialists as they do this," Poole said.

Recovery operations are often paused for various reasons, including recently because of treacherous winter conditions. The operations are part of ICRC's long-standing work as a neutral intermediary in the region since 1992.

ICRC forensic experts are also supporting mortuaries across the region, providing cold storage facilities, equipment and advice to the teams carrying out the difficult task of identification.

"Retrieving human remains, identifying the victims and returning them to their families is complex and takes time. There is always a lot of pressure on forensic practitioners from authorities and families to work as quickly as possible, but there is no margin for error," said Jane Taylor, ICRC's regional forensics manager for Europe and Central Asia.

"People going missing and families not knowing what happened to them is one of the most agonizing and often overlooked scars left by conflict. Thousands of families across Europe today are living with this pain. Besides those affected by the Nagorno-Karabakh conflict, there are hundreds of people missing in Ukraine after almost eight years of conflict, for example, and more than 10,000 people missing in the Balkans," said Martin Schüepp, ICRC's regional director for Europe and Central Asia.

The ICRC is the only major humanitarian organization present across the region in relation to the Nagorno-Karabakh conflict. A neutral, independent and impartial organization, its mandate stems from the Geneva Conventions of 1949.

Besides the ICRC's forensics and weapons contamination work, its work on missing people and detention, it carries out a range of humanitarian activities across the region, such as supporting tens of thousands of people to rebuild their livelihoods, improving access to education, addressing mental health and psychological issues and raising awareness of landmine risks.


Note to editors:
1. ICRC's Europe and Central Asia regional director, regional weapons and forensics specialists and spokespeople are available for interviews.
2. Under international humanitarian law, parties to a conflict have the duty to search for and collect the dead, treat the remains with respect and organize the return of the remains to the opposite side, including remains linked to earlier phases of a conflict.
3. Established in 1863, the ICRC operates worldwide, helping people affected by conflict and armed violence and promoting the laws that protect victims of war. It is based in Geneva, Switzerland, and works in more than 100 countries. A neutral, independent and impartial organization, its mandate stems from the Geneva Conventions of 1949.
4. The ICRC has more than 400 staff members in the region and a budget of 44.5 million CHF.