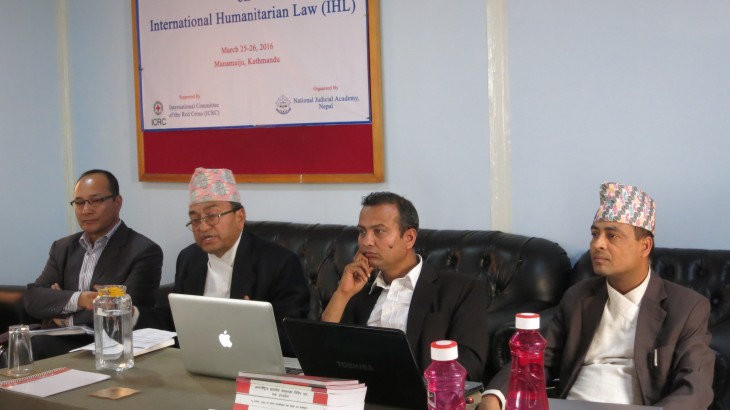 Panellists listen intently to comments during an interactive session on restorative and transitional justice for international crimes. CC-BY-NC-ND / ICRC / B. Kafle

Judges, prosecutors and court officers gathered in Kathmandu on 25–26 March for a seminar on international humanitarian law (IHL) at which national and international experts gave presentations on IHL, including case studies on a variety of related topics.

In her opening address, Dragana Kojic, head of the ICRC delegation in Kathmandu, said: "Without doubt, the judicial system has become more and more involved in dealing with IHL by applying its norms and, through that process, interpreting them. This is not only done through international courts. National jurisdictions have in many cases also been instrumental in making protections established under IHL more effective."

Kojic expressed appreciation for the tireless efforts that went into making the workshop a success. She said the ICRC was privileged to work with the dedicated and insightful members of the Academy.

The Honourable Keshari Raj Pandit, the Academy's executive director, affirmed that the workshop could not have taken place at a more opportune moment. "I found topics discussed during the workshop to be very relevant, and I believe the workshop as a whole was successful in providing a broader understanding of IHL amongst participants," he said.

Twenty-four people – including eight district judges – took part in the workshop. Themes discussed included IHL and the work of national judicial authorities, repression of serious violations of IHL at national and international level, restorative and transitional justice for international crimes, and the missing and the role of judicial authorities in the application of IHL and human rights law.

In a session devoted to case studies, participants were divided into groups and given different sets of questions to work on, after which they presented their observations to the full workshop. A panel discussion on restorative and transitional justice for international crimes proved highly interactive as participants enriched the discussions with their comments. The panel comprised two representatives each from the Truth and Reconciliation Commission and the Commission of Investigation on Enforced Disappeared Persons, and one Supreme Court advocate, and was chaired and facilitated by the executive director of the Academy.