Nepal earthquake: People’s first need is to know fate of loved ones 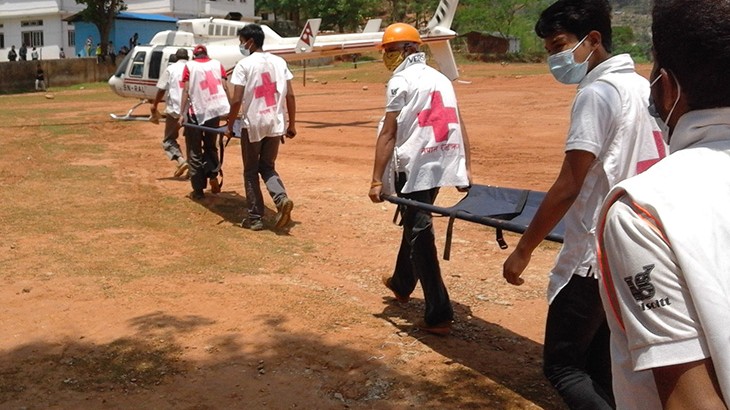 As the Red Cross and Red Crescent Movement strives to reach remote areas that had been cut off by the devastating earthquake, the ICRC is concentrating on helping people discover the fate of their loved ones.

The earthquake that struck Nepal on 25th of April wiped out entire villages, destroyed livelihoods, made roads impassable and reduced centuries old heritage to rubble. The official death toll stands at around 7,650. More than 16,000 were injured. More than half a million homes have either been totally or, partially, destroyed.

"At this time of immense loss, we are trying to do our best to help the Nepali people. We do this both directly and, indirectly, by supporting the Nepal Red Cross Society (NRCS) and the International Federation of Red Cross/Red Crescent Societies (IFRC)," said Dragana Kojic, head of the ICRC delegation in Nepal. Based on the distribution of roles within the Red Cross/Red Crescent Movement, it is the NRCS that has the lead in a situation of natural disaster in peacetime, with support from the IFRC. For its part, the ICRC concentrates on the restoration of family links, the management of the dead and emergency first aid.

"The first thing you do when you have survived an earthquake is to look for your loved ones. This is a human urge that is even stronger than hunger," said Saurav Shrestha, head of Protection at ICRC Nepal. Immediately after the 7.9 earthquake struck, the ICRC launched its familylinks website, first in English, then in Nepali. In less than two weeks, the page received more than 1,2 million visits. This electronic tool allows people to register names of persons with whom they have lost contact, names of those who wish to inform others that they are alive, and search through the list of missing or of those who have responded that they are alive.

ICRC delegates and NRCS volunteers visited hospitals, childrens' homes and camps for displaced people in order to help people who were trying to get in touch with their relatives. Passing on simple "I am alive" messages made a huge difference. In this way, families of injured people who had to be urgently evacuated could find out in which health facility they were. Some patients received financial assistance to return back home once they had left hospital. Efforts were also made to reunite children with their relatives. Special teams have also been sent to affected districts in order to support NRCS specialists in restoring family links.

Management of the dead is another field where ICRC has well-established expertise. "We currently provide technical and material support to the Department of Forensic Medicine in Kathmandu, with whom we have a long-standing relationship," said Cheryl Katzmarzyk, an ICRC forensic coordinator. Another objective is to provide guidance to security forces and affected district authorities so they can identify and properly manage dead bodies with dignity and in full respect of cultural practices. Messages on not cremating the dead before they have been properly identified are being disseminated. Equally important is explaining that dead bodies are not a source of epidemics.

"The Nepali people have shown immense resilience, and impressive solidarity by spontaneously assisting those worst affected by the earthquake. NRCS volunteers were among the first ones to rush to save lives, even when they had been severely affected themselves," added Dragana Kojic.

Between 25 April and 7 May 2015, in cooperation with the Nepal Red Cross Society, the ICRC: