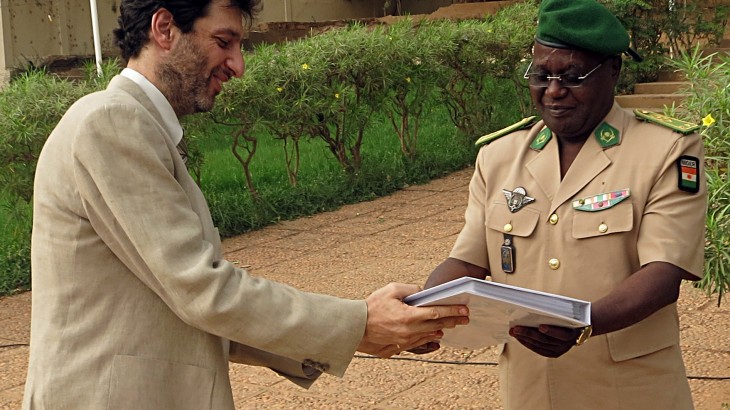 Niamey, Niger, 24 March 2015. The head of the ICRC's Niger delegation presents a copy of the new IHL manual to the secretary-general of Niger's ministry of defence. [CC BY-NC-ND / ICRC / H. Mahamadou]

Niamey (ICRC) – An instruction manual on international humanitarian law was officially presented today to Niger's Ministry of National Defence. It was drafted by the country's defence and security forces with support from the International Committee of the Red Cross.

"Niger faces many different security challenges, and has deployed its armed forces in military and security operations both on Niger's own territory and abroad," said Mr Karidjo Mahamadou, Niger's Minister for National Defence. "It's vital for our soldiers to behave in a way respectful of the rules and values which form the basis of our republican army." Ensuring that the defence and security forces had a thorough knowledge of international humanitarian law and complied with it in practice was, he added, Niger's responsibility.

Since 2003 the ICRC has been helping Niger's forces in their efforts to promote humanitarian law, include its rules in their training and military doctrine, and incorporate it into the process of planning and carrying out operations. In July 2012, a joint order was issued by the Defence and Interior Ministries making it compulsory to teach this law as part of military training. The order paved the way for a process of incorporation, in which this manual will play a key role. It was written by a group made up of officers and non-commissioned officers and facilitated by ICRC experts. The group produced a draft, which was approved by the Ministry of Defence.

The armed forces are engaged in a number of defence and security operations in Niger. They face a variety of challenges, many arising from the violence afflicting several neighbouring countries. Moreover Niger is a major contributor of troops to United Nations peacekeeping operations, in particular in Mali and Côte d'Ivoire. Since early February its forces have carried out operations in Diffa, an area deep in south-eastern Niger, where they are fighting armed groups active on both sides of the border with Nigeria. 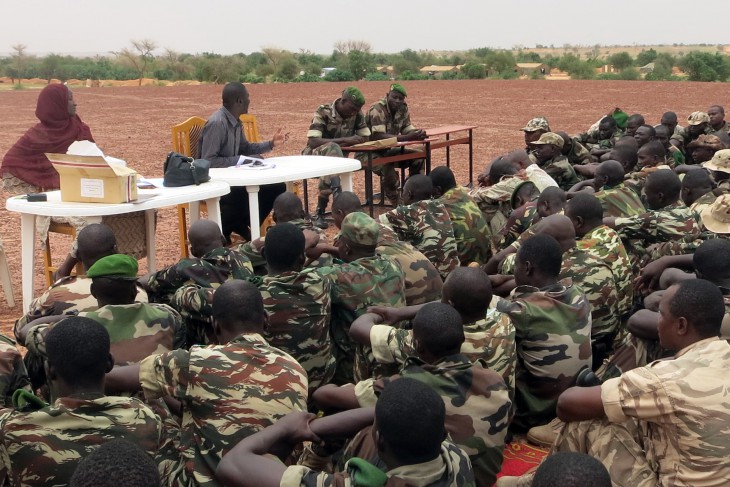 Ouallam, Tillabéry, Niger. A contingent of Niger army personnel about to deploy to Mali as part of the Multidimensional Integrated Stabilization Mission in Mali (MINUSMA) receives an IHL briefing from the ICRC. [CC BY-NC-ND / ICRC / H. Mahamadou]

"This manual will give our instructors an invaluable aid in teaching soldiers their obligations during hostilities and their responsibility for protecting the lives and dignity of civilians, the wounded and detainees," explained Colonel-Major Oumarou Namata, who is in charge of armed forces training.

Niger is party to the Geneva Conventions and to most other humanitarian law treaties. These treaties lay down an obligation to take all steps needed to ensure compliance with their essential provisions, that is, those designed to limit the effects of conflict. It is part of the ICRC's mandate to help Niger and all other countries achieve this, and the organization will maintain its dialogue with the Niger authorities whenever military operations are under way. When Niger had just started fighting armed groups in Diffa last month, the ICRC sent the government a memorandum to remind it of its obligations. 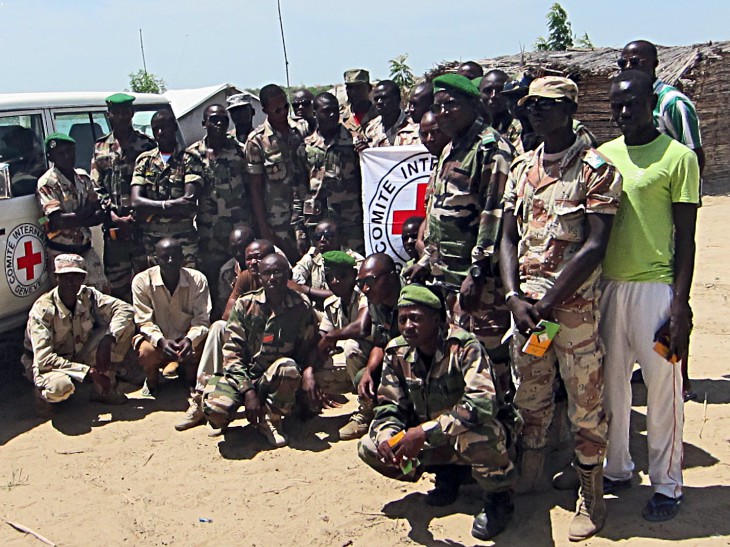 The ICRC is the guardian of humanitarian law, a set of rules based on humanitarian principles that seek to limit the effects of armed conflict. This branch of law protects people who are not – or are no longer – taking part in fighting, and it restricts the means and methods of warfare. In 2014, the ICRC organized events in Niger to raise awareness of the fundamental rules of this law. They were attended by over 1,500 soldiers and other members of military and security forces deployed in areas where military / security operations were being carried out. In addition, some 1,700 officers and other ranks received training in the law before being deployed to Mali and Côte d'Ivoire as part of UN peacekeeping missions. Finally, some officers were awarded scholarships to enable them take part in training and high-level meetings on the subject.