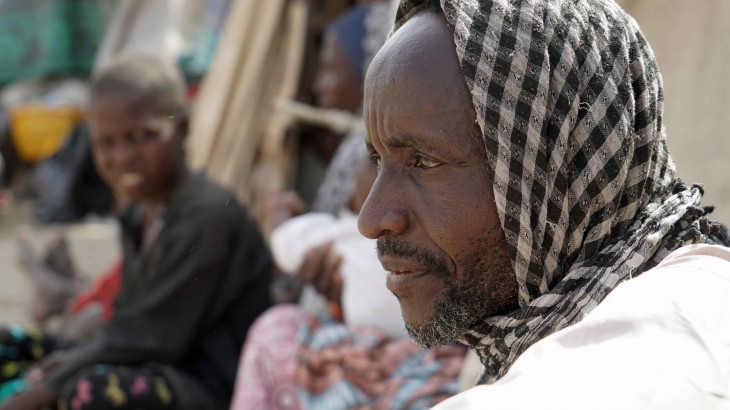 A spike in violence has seen tens of thousands of people uprooted from their communities in north-eastern Nigeria.

The influx of people to urban centres has placed additional strain on limited resources and crowded camps.

"People here know what hardship is," said Markus Dolder, who heads up the ICRC's work in the area.

"If you're a farmer who has to withstand the different seasons – the heat, the sandstorms, the heavy rain – you know that life does not come easily. You have to work hard for it on a daily basis. But what they have to contend with today is on a different scale."

There are 14 camps – with a 15th currently under construction – around Maiduguri. Prior to the recent influx, the conditions in the camps were already precarious.

"In one camp that received a particularly high number of people, the infrastructure is close to collapse. The schools that were running can no longer function as there are too many people," added Dolder.

"There is less food and clean water available, and access to health care is limited. And given the level of overcrowding, there is a heightened risk of disease outbreaks."

A spike in violence has seen more than 30,000 people descend on Maiduguri, Nigeria, in recent weeks.

Our colleague gives an update on the humanitarian situation in the camps @ICRC_Africa pic.twitter.com/W7INKHYw02

Many of those living in the camps have been displaced multiple times by the violence and are having to make the unfamiliar transition from rural to urban life.

Together with the Nigerian Red Cross, the ICRC is distributing food and emergency kits, building new shelters, and installing water and sanitation facilities.

"At the moment we're just trying to make sure people's basic needs are being met, so they can live with some semblance of dignity," said Dolder.

"It's very much an emergency response so we can help as many people as possible. It's going to be an ongoing effort."

The unseen trauma of war

The violence in the region means that many civilians bear the scars of war – gunshot wounds and shrapnel injuries are common. But it is the unseen mental scars that can do most damage.

"Imagine the most extreme acts of violence – witnessing your family being killed, fleeing your home with nothing, seeing your village burned to the ground. This is the reality for some people here and it can lead to profound mental trauma," said Douglas Khayat, an ICRC mental health delegate.

"And in addition, they're having to adapt to an urban setting. Some people have never been to a big city before."

The first step in helping people overcome trauma is to raise awareness of the psychological symptoms they may be experiencing.

Nigerian Red Cross volunteers visit houses and shelters in the camps around Maiduguri to speak to people about mental health issues and to encourage them to seek help.

Group counselling sessions, run over a period of three months, then allow people to come together to discuss and share what they have been through.

"Each individual is different and each person has their own way of coping," said Khayat. "But over the weeks you see the impact of the sessions and how they help people digest their experiences."

At the end of the sessions, 'leaders' are identified from among the participants and encouraged to keep on convening group meetings, thereby creating a social network that people can turn to.

"Only a certain number of people come to the sessions, but the impact spreads way beyond," added Khayat.

"If you have a depressive mother, then her children are all going to be affected. If we can help this one woman, the whole family is going to benefit. That's the life-saving aspect of our work."