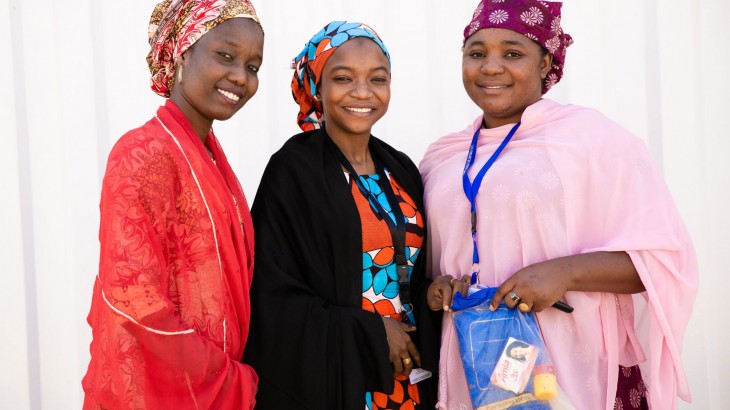 Zainab (middle) with two of her employees standing in front of their office in Maiduguri. Alyona SYNENKO / ICRC

Many of them had been forced to abandon their homes with little more than the clothes on their backs, which meant their needs were acute. Despite numerous requests, Zeinab felt that there were still some serious problems that remained under the surface.

"Here women never speak about menstruation. Some don't even tell their parents when they first get their period," Zainab says.

In Dalori camp she took several women aside to discuss their specific needs. "Some refused to answer my questions," she recalls from the first meetings. "I told them, I am a woman and a mother like you. I need to know, so I can help."

In 2014, Zainab was going through a difficult period of her life, struggling with depression which was caused by the death of her husband. She decided that the best way to keep her mind and body occupied and overcome her own pain was by helping others. Seeing a steady stream of displaced people flowing into the camps, she decided to go and speak to them.

It took time to gain their trust, but eventually, the problems related to women's hygiene and health came to light. Hygiene items like sanitary pads were too expensive for the displaced, who did not always have enough to eat. Many women used pieces of cloth or tissue instead. A lack of proper hygiene caused health complications and affected many families' lives.

After she understood the scale of the problem, Zainab went to the market and bought a piece of soap, a pack of hygiene pads, antiseptic and body lotion. She spent 3 US dollars on the four items, a sum many women could not afford. She then started thinking about how to bring the price down.

"I searched online to see how to make body lotion, then called a friend in Lagos who works at a cosmetics company."

Zainab found a local producer in Kano and negotiated a favourable price for the items that make up her signature dignity kit. Working with local producers and making her own body lotion, she managed to reduce the price to 2 USD for a package consisting of ten sanitary pads, a bar of soap, antiseptic, and body cream.

"The first time I made the lotion I felt so excited - I created something!"

In 2018, Zainab wrote a business proposal and received a USD 5,000 start-up grant from the International Committee of the Red Cross (ICRC) and a business training session from Tony Elumelu Foundation.

"People in places affected by the armed conflict have fewer opportunities and we want to change this. We partnered with Tony Elumelu Foundation to provide business grants and training in the north-east and in the South," says Taimur Bashir who runs economic security programmes for the ICRC.

Today Zainab is the executive director of Zaidal Dignity Kit. The company employs five full-time staff and trains volunteers in the camps to assembled dignity kits. It counts organizations like the United Nations Population Fund among its clients.

Like many other businesses around the world, Zainab's business has been affected by the outbreak of the COVID-19 pandemic. The production of the 'dignity kit' has been put on hold because of the lockdowns. The local raw material she uses have become unavailable and the majority of the orders have stopped. She has started producing facemasks and distributing them in the camps. Today she has made about 100 facemasks and is planning to produce another 1,000.

Despite all the challenges, Zainab's dream to compete with multinational organizations like Unilever and make affordable hygiene products available to all women in Nigeria remains alive.