Nigeria: The thousand widows of Maiduguri 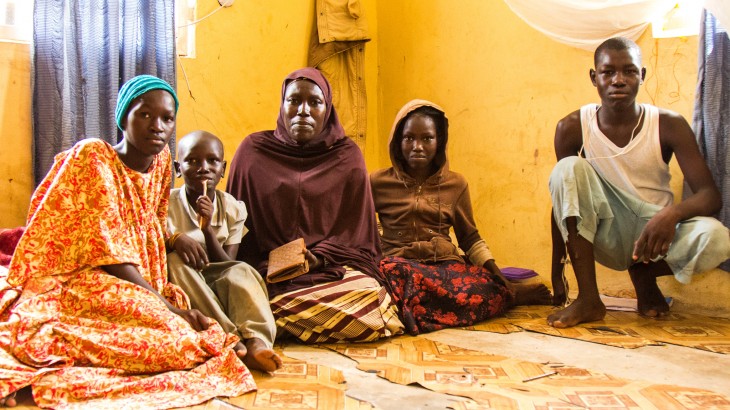 Maiduguri, Nigeria. Aisha Ishaku, who was widowed after her village was attacked in 2014, sits in the small room she shares with her six children. Her eldest child disappeared on 4 August 2014 during the attacks. CC BY-NC-ND / ICRC / Jesus Serrano Redondo.

The conflict in north-eastern Nigeria has left thousands of women widowed. Lacking a formal education, many have been reduced to begging and are unable to feed their children. Working with local widows' associations, the ICRC is providing food for widows and their families, and providing grants that enable them to set up small businesses and become self-sufficient.

Aisha Ishaku (42) will never forget 4 August 2014. That was the day of the attack on her village of Gwoza in Nigeria's Borno state, which left one of her seven children missing and her husband with a gunshot wound to the leg.

Aisha and her remaining children put her injured husband in a wheelbarrow and escaped. After a trek of 25 kilometres, they finally reached the hospital in Madagali, Adamawa state.

Aisha's husband, a 52-year-old teacher, was suffering from diabetes. His condition aggravated the gunshot wound and he died a few months later in Maiduguri State Specialist Hospital.

Since Aisha became a widow, she has been struggling to pay the rent and the school fees for her six children. Like many other widows in Maiduguri, she roams the streets with her children, selling Kosai - fried bean cakes - for five Naira (CHF 0.02) each. Some of the widows sew hats for 500 Naira each (CHF 2.50). 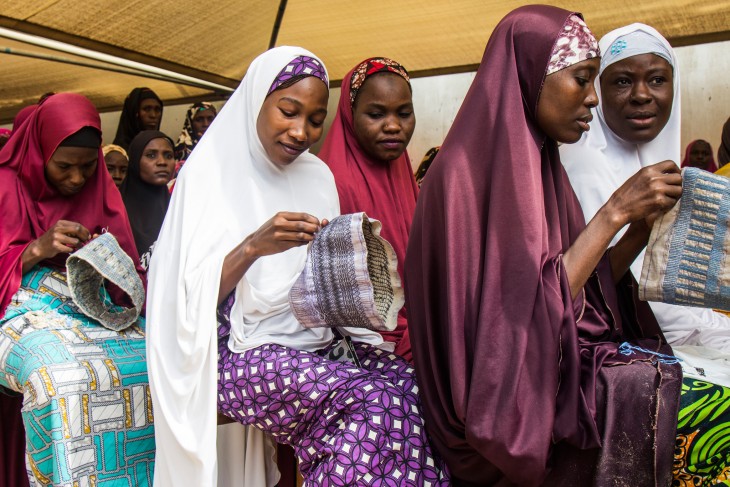 In Maiduguri, where Islam is the main religion, men are expected to provide for their wives. Losing a husband could mean having no income. 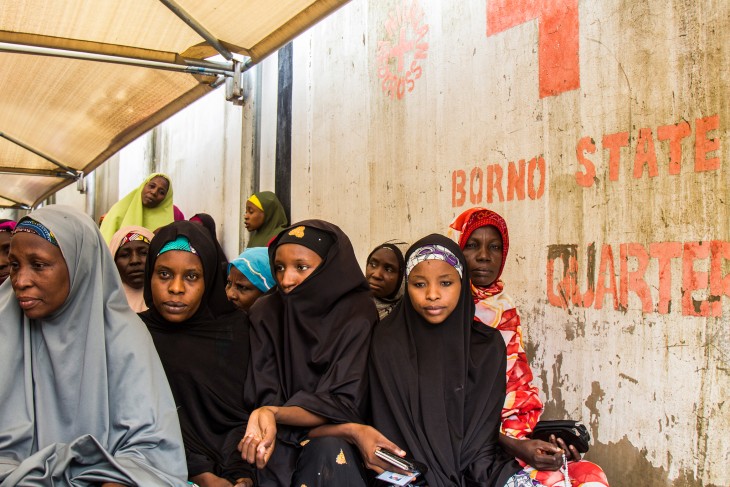 Maiduguri, Nigeria. More than 7,000 women registered with the Christian and Muslim Widows Association lost their husbands to the conflict between Boko Haram and the Nigerian Army. CC BY-NC-ND / ICRC / Jesus Serrano Redondo.

"Most of the widows are struggling to provide even one meal a day for their families. And it's difficult for them to find a job, because most have little formal education," says Aishatu Maaji, Secretary of the Muslim Widows Association in Borno state. 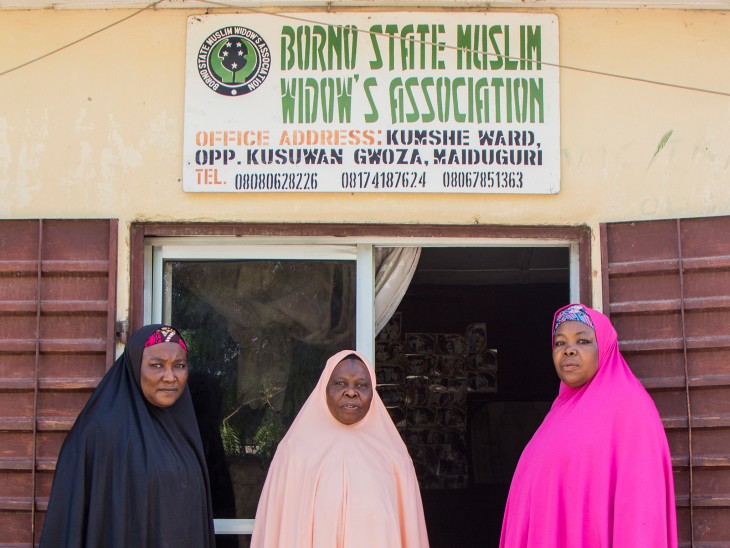 The forgotten victims of the conflict

The husbands of more than 7,000 women registered with the Christian and Muslim Widows Association died as a result of the conflict between Boko Haram and the Nigerian Army. Two million people have fled to Maiduguri. This is now a regional humanitarian crisis, affecting the neighbouring countries of Cameroon, Chad and Niger, and the number of widows may well increase.

Many widows are reduced to begging on the streets of Maiduguri.

Cooperation between the Borno State Widows Association and the ICRC is enabling widows to buy more food, reduce their debts and start small businesses.

Memuna Ihaka (25) is from Kogi state. Her husband died two years ago while attempting to flee an attack on their town. "My four children and I never even saw his body. I only heard the story from eyewitnesses," Memuna tells us, the sadness still fresh in her voice.

A few days ago, Aisha and Memuna were among 1,300 widows who went to an ICRC distribution centre to collect food. For six months, they are receiving a monthly issue, of rice, maize, millet, groundnuts, beans, salt, sugar and oil. 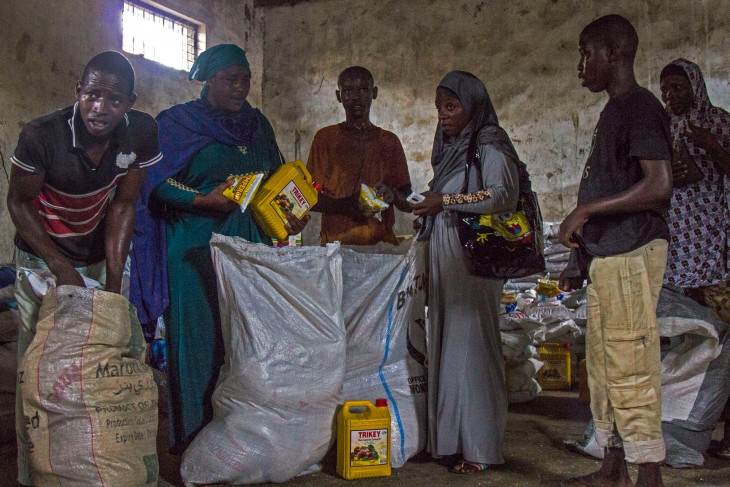 Maiduguri, Nigeria. Memuna collects food from an ICRC distribution centre. Since she was widowed in 2013, she has been selling fried bean cakes on the streets of Maiduguri. CC BY-NC-ND / ICRC / Jesus Serrano Redondo.

"Our life has improved since I joined the ICRC widows' project. We have more food, and the quality's better. My debts have reduced and I can pay the rent and the school fees for my six children," Aisha tells us with a big smile.

Widows get back on their feet

Widows like Aisha can also receive a 40,000 Naira (CHF 200) grant to buy materials with which to set up a business.

Amina Lawan (41) lost her husband three years ago. "Before the ICRC came and helped my family, we hardly ate twice a day. I didn't have enough money to support my children," she explains, as she sews a traditional Nigerian dress.

With her ICRC grant, Amina has bought three sewing machines and now has her own tailoring centre. She is currently training two apprentices. 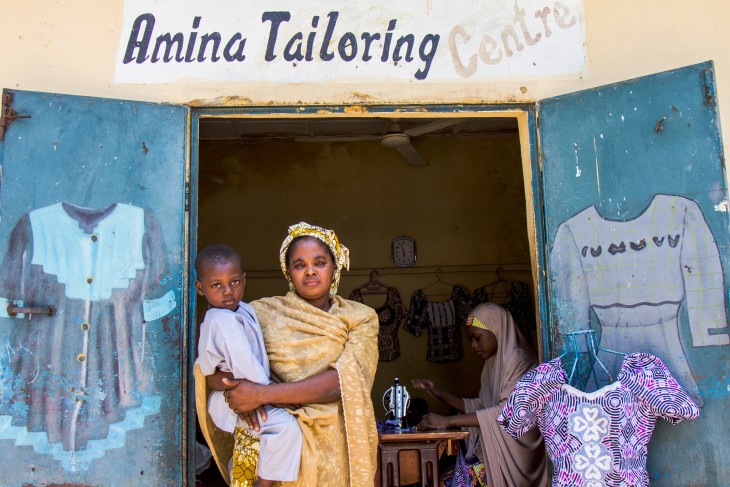 Maiduguri, Nigeria. Thanks to an ICRC business grant, Amina Lawan now has her own tailoring centre in Maiduguri and earns enough money to pay for her children's health and school fees. CC BY-NC-ND / ICRC / Jesus Serrano Redondo.

"My life has completely changed. I can take care of my family and even pay health and school fees," Amina says.

The ICRC is one of the few organizations supporting widows in Borno state. Since the beginning of the project, more than 2,500 women have benefitted and 500 have started their own businesses.

"There are no more widows begging on the streets," says Aishatu Maaji.

"I still miss my husband, but the ICRC's support has helped me cope with his loss and ensure a better future for me and my children," Aisha says. 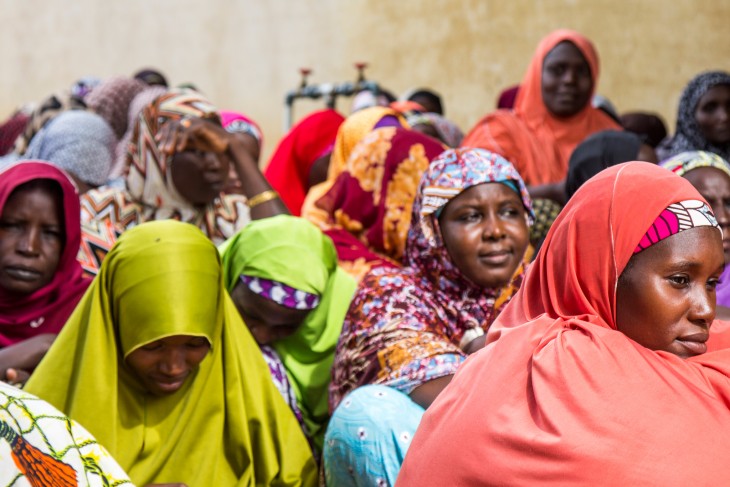 Maiduguri, Nigeria. The conflict in northern Nigeria has escalated into a regional humanitarian crisis, affecting the neighbouring countries of Cameroon, Chad and Niger, and the number of widows may well rise. CC BY-NC-ND / ICRC / Jesus Serrano Redondo.

The widows of the conflict can now provide food, health care and schooling for their families. In the process, they have regained their dignity and built the confidence they need to stand on their own two feet.