Nigeria: Victims of conflict and violence struggle to survive

As armed conflict and violence intensify in parts of Nigeria, the ICRC and the Nigerian Red Cross Society are responding to emergencies, managing and evacuating the wounded and dead, and helping people driven from their homes. Together they have brought aid to almost 50,000 displaced and vulnerable people in the first five months of the year. 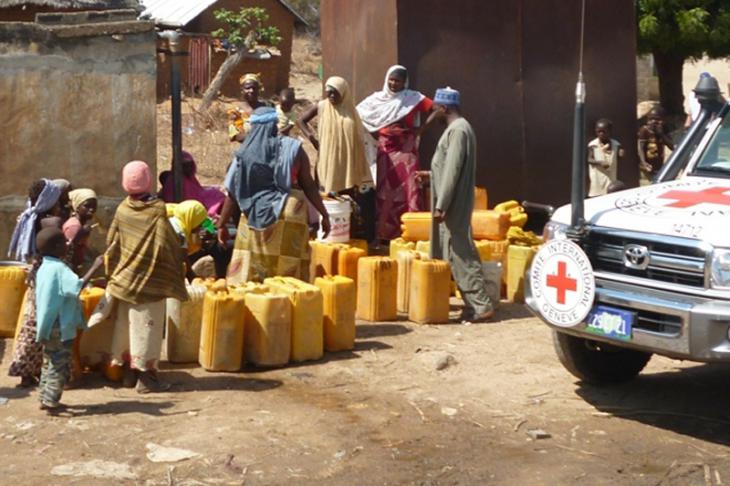 Kwa village, Qua'an Pan Local Government Area, Plateau State, Nigeria, January 2014.
The people of Kwa village in Qua’an Pan Local Government Area have received some 300 people displaced by intercommunal clashes between the Fulani/Hausa and Tarok tribes in Kukah and Asakio, some 80 km away in the same state. The only water source in the village has been contaminated, and the water is not safe to drink. The ICRC is repairing hand pumps as an emergency measure and will install a solar-powered water supply system as a longer-term solution.
/ CC BY-NC-ND / ICRC / E. Adinya

"The conflict in north-east Nigeria has flared up in recent months, while other areas have seen growing tensions and armed violence. The number of people killed, wounded or displaced is on the rise, with children being targeted in attacks or abductions," said Zoran Jovanovic, head of the International Committee of the Red Cross (ICRC) delegation in Nigeria. “More and more displaced people are seeking refuge in neighbouring villages, states and countries, often taken in by host communities.”

A growing number of inter-communal clashes between farmers and pastoralists in central Nigeria are driving people to flee their homes and destroying their livelihoods.

The increased violence and bomb attacks in Jos, Kano and Abuja have put a strain on hospitals, some of which needed additional supplies to treat the sudden influxes of mass casualties. “All parties involved in the violence must spare civilian life and property,” added Mr Jovanovic.

The ICRC, together with the National Red Cross Societies in the region, is doing its utmost to provide humanitarian assistance – medical care and emergency relief – to the victims of the conflict, both within Nigeria and in neighbouring countries, especially Niger. 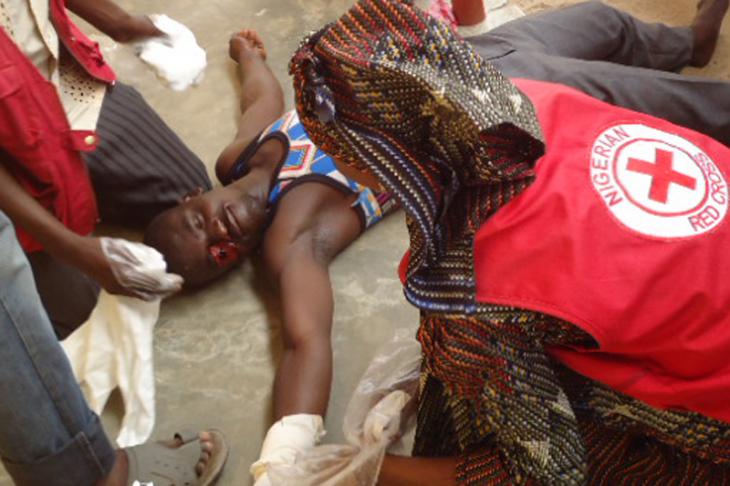 Some 1,190 people wounded in armed violence in northern Nigeria and in the capital Abuja have received emergency care from first-aid providers trained by the ICRC and the Nigerian Red Cross Society (NRCS).

"In recent months, we have made 50 donations of surgical and first-aid supplies to 17 hospitals and facilities providing first aid in communities without any other access to health services," explained Bernadette Gleeson, head of ICRC surgical and first-aid programmes in Nigeria. "A full ICRC surgical team remains on standby to assist with the management and treatment of people wounded by firearms or explosive devices. After the bomb blast on a market in Jos last May, they helped treat over 30 patients admitted to Plateau State Specialist Hospital."

Food supplies for the most vulnerable in the north-east 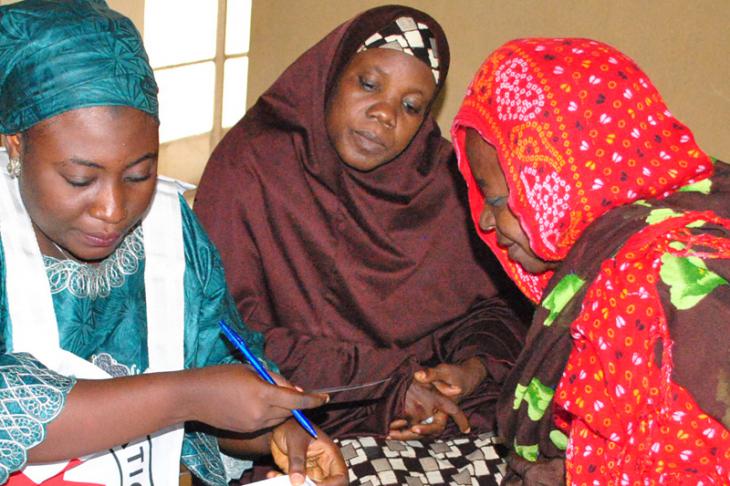 Maiduguri, capital of Borno State, Nigeria, October 2013.
A widow receives her voucher from a member of ICRC staff, to be exchanged for a one-month supply of food for a family of six. The monthly ration included rice, beans, cooking oil and condiments.
/ CC BY-NC-ND / ICRC / D. Sani

Over a six-month period up to March 2014, 250 widows living in and around Maiduguri (the capital of Borno state) who had lost their husbands in the ongoing conflict received monthly food aid for them and their families.

The 1,500 people helped in this way were therefore able to save money for other necessities, such as health care, education and clothing. More than 150 widows saved enough to set up small businesses, for which they continue to receive the ICRC’s input and advice. This programme is due to be extended to another 950 widows from July 2014.

"Receiving this aid improved the health of my children and took a huge weight off my shoulders. With the money that I would have used for food, I could afford to buy new school bags and shoes for my three children and start raising poultry," said Yatata, one of the widows assisted by the ICRC in conjunction with the Borno Muslim and Christian Widows' Associations.

However, reaching people affected by the conflict in villages in the north-east of the country remains a complex task. The ICRC and the NRCS have assessed the needs of a further 1,800 displaced people in Borno state but have been unable to deliver food and emergency household items to them because of the lack of security in the area. "The deteriorating security situation is the main obstacle to our efforts to help people endure the day-to-day effects of conflict and violence," said Mr Jovanovic. 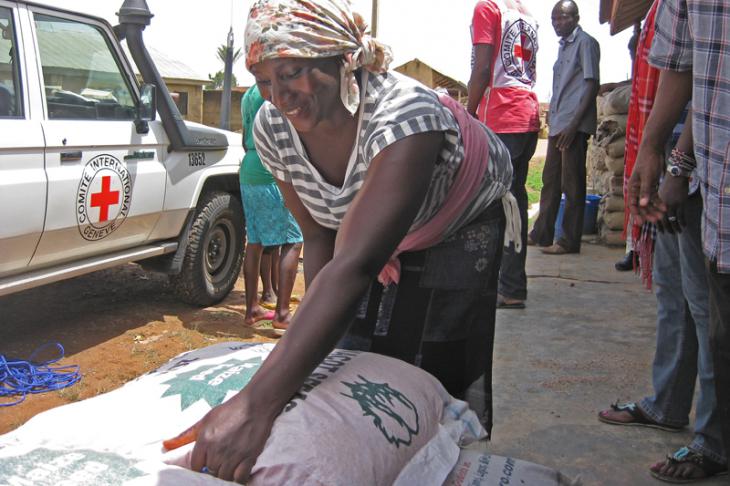 Barkin Ladi Local Government Area, Plateau State, Nigeria.
A farmer picks a bag of maize seedlings in preparation for the planting season. The ICRC provided maize seedlings and fertilizers to some 24,500 people displaced by intercommunal clashes in Plateau state. As they were displaced from their homes and farmlands, the displaced people reached an agreement with their host communities to cultivate some of those communities' fields.
/ CC BY-NC-ND / ICRC / J. Abuku

"We trucked 76,000 litres of water to some 2,000 displaced people taking shelter at Bondong Primary School in Kaura, Kaduna state, over a one-month period," explained Angelina Adler, who oversees the ICRC's water programmes in Nigeria. "This covered their drinking and cooking needs while we dug a well in the school courtyard to serve both the displaced and the host communities."

Around 15,000 displaced people have received food, while an additional 8,500 saw their living conditions improve thanks to emergency assistance in the form of shelter, hygiene and household items distributed by the ICRC and the NRCS.

"Some of the displaced families have been able to negotiate with local communities in the fertile areas of the Middle Belt to use farmland in order to plant their own crops and feed their families," said Janet Angelei, head of the ICRC’s economic-security programmes in Nigeria. “Around 24,500 of them have received enough maize seed and fertilizer to cultivate one hectare of land, boosting their production by 40%."

Visits to people detained in connection with the conflict and violence

In the first five months of 2014, the ICRC visited more than 20 facilities where people are being held under the authority of the Nigerian Police Force, the Nigerian Army and the Ministry of Interior. During these visits, ICRC staff assessed detainees’ treatment and living conditions and subsequently submitted confidential feedback and, where necessary, recommendations for improvements to the detaining authorities. The ICRC also improved the living conditions of detainees in police stations and prisons by providing blankets, mosquito nets, and hygiene and recreational items.

"The ICRC is pursuing its dialogue with the authorities with a view to visiting all those detained in connection with the conflict in north-eastern Nigeria, regardless of where they are being held," said Monique Crettol, the ICRC's protection coordinator in Nigeria.

Since the beginning of 2014, the ICRC has also: