Pakistan: ICRC completes 15th National Course on Management of the Dead in Emergencies 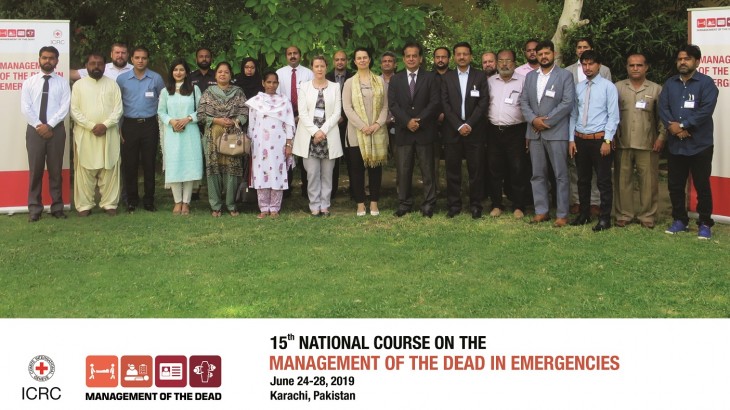 When people die during emergency and disaster situations, their bodies must be handled with respect, efficiency and dignity. Across the world, the International Committee of the Red Cross (ICRC) works to facilitate the recovery, identification and return of the remains of people who die in such situations. The ICRC works to strengthen the systems responsible for professional management of the dead, i.e. the medicolegal system and forensic science.

In Pakistan, the ICRC's forensic unit has led the way in standardizing procedures for managing the dead. It has developed a standardized course in collaboration with government agencies and emergency response services to ensure their efforts meet international standards.

Earlier this year, the ICRC hosted its 15th National Course on the Management of the Dead in Emergencies in Karachi. The course was attended by 26 participants from different law enforcement, medical, disaster management and forensic science agencies.

Karachi commissioner Iftikhar Ali Shallwani opened the session together with Dragana Kojic, head of the ICRC's delegation in Pakistan. In his address, Shallwani highlighted the need for better coordination between various responder, investigation and transport groups – both governmental and otherwise.

He also pushed for greater ICRC presence in Karachi and mentioned other areas in which the ICRC could work in, such as existing committees for reducing urban violence and a forthcoming body to address provision of health care in dangerous situations.
Over five days, course participants had the opportunity to listen to and take part in presentations covering theoretical and technical subjects followed by frequent practical exercises to demonstrate the main principles in management of the dead.

Participants attended academic presentations on a variety of subjects including DNA and fingerprint identification, various disaster relief services and agencies in Pakistan such as Punjab Forensic Science Agency and the Pakistan Red Crescent Society, the recovery and transfer of human remains, standards to manage data and the mental health of families and responders post-emergency.

Attendees ranged from the assistant director of the Provincial Disaster Management Authority for Sindh province to an ambulance driver for the Edhi Foundation (a non-profit organization) from Balochistan.

The diversity of participants highlighted the potential for more cohesion and better collaboration between organizations. For instance, upon learning about a new DNA facility in the region, namely Sindh Forensic Lab, many agencies decided to explore partnership opportunities with the organization. The course also highlighted already existing partnerships, such as the Citizens Police Liaison Committee that coordinates the sharing of fingerprint data from the national database with morgue workers (Edhi Foundation) to aid in identification of unidentified people in hospitals and morgues (both living and the dead).

By facilitating greater coordination and efficiency between various organizations – and allowing each to play to its strengths – the ICRC will keep working to improve upon this aspect of its humanitarian work in Pakistan and the world.