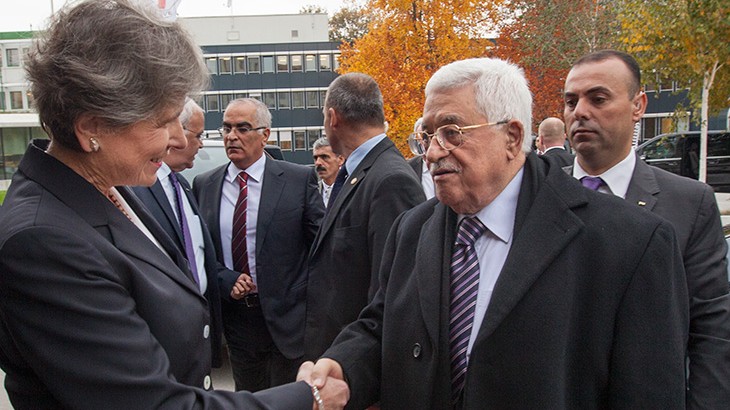 The Vice-President of the International Committee of the Red Cross (ICRC), Christine Beerli, met with an official delegation from Palestine today led by President Mahmoud Abbas, to discuss the humanitarian situation in Israel and the occupied Palestinian territory.

At the meeting in Geneva, Ms Beerli reaffirmed the ICRC's commitment to the Palestinian people and expressed concern about the recent upsurge of violence in the occupied Palestinian territory and Israel. Saying this had generated a climate of fear and tension, Ms Beerli underlined the need for all sides to exercise restraint and protect civilians from direct or indiscriminate attacks.

President Abbas said the ICRC's long-standing presence in Palestine acted as an important deterrent to violence. He stressed the crucial role the ICRC plays in promoting respect for international humanitarian law through its dialogue with the authorities on all sides, saying this provides a much-needed degree of protection for the civilian population.

Ms Beerli briefed the Palestinian delegation on the ICRC's work visiting detainees in both Israel and Palestine, to monitor conditions and help detainees remain in contact with their families. People detained in connection with the latest violence have also received ICRC visits over recent weeks.

Since the outbreak of violence in recent weeks, the Palestine Red Crescent Society has transported 7,000 wounded people to health facilities, while its Israeli counterpart the Magen David Adom has treated 112 patients. Ms Beerli called for medical personnel, hospitals and ambulances to be fully respected and protected by all sides, and said the ICRC was ready to step up its support to Palestinian health facilities if needed. The ICRC has been providing drugs and other medical supplies to Makassed Hospital (which has the largest emergency department in East Jerusalem), and to the Palestinian Ministry of Health in the West Bank.

The ICRC has maintained a permanent presence in Israel and Palestine since 1967. Currently it has 340 staff and offices in Gaza, the West Bank (including East Jerusalem), Tel Aviv and the Golan.