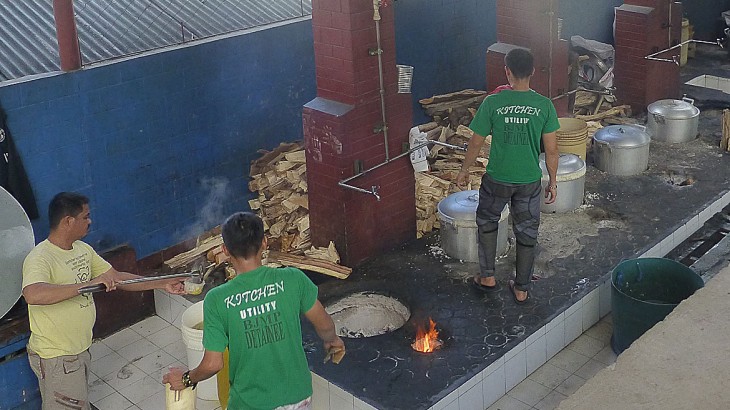 Manila (ICRC) – A new solar water-heating system, which was installed in Davao City Jail's kitchen with support from the International Committee of the Red Cross (ICRC), was inaugurated today. The system is expected to significantly reduce environmental and financial costs for the jail.

By using energy from the sun to heat the water used to cook food for over 2,000 inmates, the new system will reduce the boiling time for each pot by 20 to 30 minutes, thereby saving up to 60,000 kilograms of wood per year. It will also save time and money, and lessen the exposure of kitchen staff to health risks associated with cooking with firewood.

"It's a big help to everyone as the meals are now served on time, unlike in the past, when they took so much effort to cook. This initiative has not only helped the jail save on costs; it has also instilled good housekeeping practices among the inmates. I always remind them to maintain such important projects to ensure their sustainability," said Jail Superintendent Simeon Dolojo, Jr., Davao City Jail's warden.

Before the system was installed, the jail management had built nine energy-saving stoves for cooking pots and had begun heating water using electrical water heaters to reduce wood consumption and the kitchen staff's exposure to smoke. Although they used less wood, the electricity bill increased, prompting them to explore alternatives.

"Aside from promoting renewable energy, we introduce these projects so that the money that will be saved could be used to improve the living conditions of inmates," explained Marco Albertini, the ICRC water and habitat coordinator.

Since 2007, the ICRC has been working closely with Philippine jail authorities, including the Bureau of Jail Management and Penology, to reduce overcrowding and improve the general living conditions of detainees.